Philadelphia is bringing back its indoor mask mandate beginning April 18 after a 50% increase in Covid-19 cases in the past 10 days.

The reinstatement is the first among major U.S. cities and comes just over a month after it was officially lifted. A few colleges also have reimposed masking indoors, including Columbia University and Barnard College in New York and George Washington University in Washington.

The moves come as U.S. cases have begun to increase again, driven by the highly infectious omicron subvariant BA.2. Nationally, the seven-day moving average of new cases was 28,169 on April 8, the highest since March 16, according to the U.S. Centers for Disease Control and Prevention. Still, infections remain well below the peak of more than 800,000 reached in January as omicron raged.

According to the CDC, which provides county-level data through April 7, Philadelphia County is considered “low risk,” with a case rate of 55.9 per 100,000 people. By comparison, New York County, which encompasses the island of Manhattan in New York City, is at “medium risk” with 238 cases per 100,000.

The CDC doesn’t recommend a mask mandate for either level of risk, though it does say people at high risk for severe illness from Covid should consider wearing masks indoors in medium risk locations. The agency made changes to its recommendations earlier this year to emphasize hospitalizations over case counts, though some public health experts have warned that positive cases are an early indicator that hospitalizations will rise.

A lack of funding and recent policy decisions have made it harder for local governments to track the spread of Covid. In some cities, testing centers have shut, while others have started charging for tests with the end of government-subsidized programs. People who use rapid tests to confirm a positive case rarely report their results, giving public health officials little insight into how widespread the virus truly is.

Unlike other major cities, Philadelphia left the door open to reintroducing masking when it lifted its mandate. The city said then that it would require masking again if cases had increased by more than 50% in 10 days, average new cases per day were less than 225 and hospitalizations were less than 100.

The next level, which would require vaccine proof at restaurants, would be reached when average new cases rise to between 225 and 500, and hospitalizations climb to between 100 and 500.

Public-health experts have praised governments who communicated what it would take to require masking again, saying they recognize the virus is likely to ebb and flow. 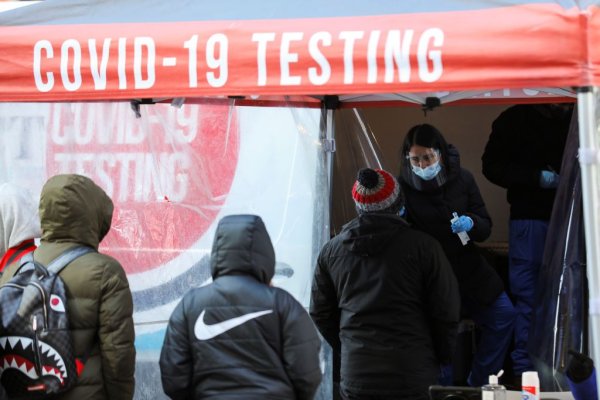 COVID-19 Could Be Surging in the U.S. Right Now and We Might Not Even Know It
Next Up: Editor's Pick