A total of 174 lawmakers in the 342-seat National Assembly voted in favor of the younger brother of three-time premier Nawaz Sharif. The new leader will have to focus on securing about $3 billion left from an International Monetary Fund loan needed to bolster the economy where reserves are enough for a couple of months of imports and the rupee recently touched a record low.

“This is the first time a no-confidence has succeeded,” Sharif said in a speech after his election. “Truth has won.”

Before Sharif was elected, dozens of lawmakers from Khan’s party resigned in a move to pressure the new ruling party and its allies to call for elections. Khan was voted out just after midnight on Sunday following a long and drawn out no-confidence debate that saw several adjournments and speeches from his associates in parliament decrying the move as a conspiracy driven by the U.S.

Being part of Monday’s vote “would be tantamount to giving legitimacy to an illegitimate government being imposed on us,” said Shah Mahmood Qureshi, Pakistan’s former foreign minister from Khan’s party. “We are all announcing our resignation today.”

Sharif said his incoming government would investigate Khan’s much-hyped allegations of “foreign intervention” in his ouster.

With Khan’s lawmakers quitting, the speaker can delay accepting their resignations—a tactic to convince them to stay or simply prolong the process. Eventually the election commission will have to conduct by-elections but since the remaining parties now have a majority, they can continue the parliamentary process, said Marva Khan, an assistant professor at the law school of the Lahore University of Management Sciences.

“As for what Khan is trying to do, he appears to be extremely disgruntled and seems to seek chaos,” she said.

Sharif has built a reputation as a business-friendly administrator who pushed ambitious infrastructure projects when he was chief minister of Punjab, Pakistan most populous province. He has maintained friendly ties with the army even as his older brother, three-time premier Nawaz Sharif, frequently clashed with the generals and is currently self-exiled in London.

Pakistan stocks and the rupee rallied Monday. Before the count, the benchmark KSE-100 index surged 3.8%, the most since April 2020 while the currency rose to the highest level in almost two weeks against the U.S. dollar.

—With assistance from Khalid Qayum. 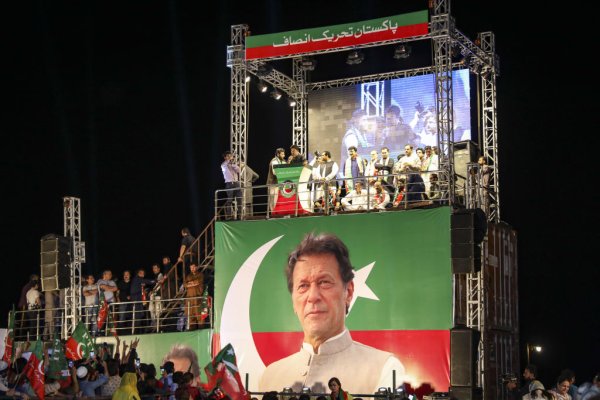 By Embracing Putin, Pakistan’s Imran Khan May Have Sealed His Own Demise
Next Up: Editor's Pick