What the U.S. Military Needs to Learn from the Ukraine War

As the brutal fighting continues in the Ukraine War, it seems likely to fundamentally upend the way we wage war in the 21st-century. From new tactics to equipment, the Russian invasion of Ukraine may presage fundamental changes in how war is conducted. What can Western militaries learn from the war thus far?

First, the extraordinary success the Ukrainian forces (armed with western technology) are enjoying against Russia armor. The numbers of tanks, armored vehicles, and heavy trucks destroyed by the Ukrainians are almost certainly in the thousands. This is largely the result of the hand-held anti-armor weapons provided by NATO countries (NLAWS from Britain, Javelins from the U.S., etc).

But it is also indicative of a tactical approach by the Ukrainians that fuses the intelligence provided by the West; the portability of the missile and drone systems; the employment of them by small, light special forces teams; and entirely new systems like the Switchblade drones.

Most importantly, each tank and armored vehicle destroyed means more dead Russians. Russian soldiers killed in action probably number around 15,000 over five weeks, which is staggering. As a point of comparison, the U.S. lost 7,000 in twenty years of wars in Iraq and Afghanistan. And the lost armor stocks will be difficult to replace in the short term. Each Russian tank costs more than $10 million, but each missile is only a hundred thousand dollars or so. War is hell, as General Sherman said in the American Civil War, but it is also expensive.

Is it time to write the obituary for the tank on the battlefield? Will they turn out to be the battleships of the 21st century, rendered obsolete by new technologies and tactics? It is certainly time to consider reducing tank inventories (as the U.S. Marine Corps is already doing) and using the resources to move toward new systems, notably unmanned. Tanks can still be effectively employed, but must be used in a coherent combined-arms manner that includes protection of them from such “cheap kill” mechanisms.

Second, the concept of close air support is increasingly at risk as well. Alongside the concerns about the efficacy of heavy armor are about the vulnerability of helicopters. We are seeing $18 million Russian attack helicopters destroyed by a hundred thousand dollar stingers—over and over. This was a key tactic in allowing the Afghanistan mujahideen to defeat the Soviet Union in the 1980s. Again, the economics of this, especially for a weak economy like Russia, are daunting, as well as replacing trained pilots.

And that is before new swarm drone systems come into full force. As artificial intelligence becomes a wartime reality, the ability to control large numbers of unmanned systems and operate them in synch to attack large relatively less maneuverable platforms like helicopters and troop transports. We are at the leading edge of achieving this capability, and doing so augers badly for expensive manned aircraft, especially those that operate routinely near to the ground.

The lesson here is not (yet) to fully walk away from manned aircraft providing the close support on the battlefield. But the Ukrainian war is a warning that we should be spending more on research and development that improves unmanned air systems, both in ground attack and in anti-air capacities; leverage improvements in artificial intelligence to make them operate synergistically together; and experiment with such capabilities aggressively to be able to provide close air support from higher altitudes and with unmanned, less expensive vehicles controlled directly by ground forces.

Read More: Ukraine Is Our Past and Our Future

Third, another key factor on the Ukrainian battlefield has been the ability of Western intelligence systems to track Russian formations and provide real-time targeting directly to the Ukrainians. This has led not only to high levels of Russians killed in action, but also to operations killing Russian general officers. This in turn creates chaotic conditions, with numerous reports indicating a lack of coherent command and control on the battlefield, and operations being directed from Moscow.

When I was Supreme Allied Commander at NATO, in strategic command of the Afghan operation, I could not have imagined taking tactical control of 150,000 troops in the field. Yet that is exactly what appears to be happing in Ukraine, with attendant failures. The lesson is that by providing real-time, highly precise targeting to forces in the field, a belligerent can help undermine one of the true centers-of-gravity in combat: a coherent command and control system anchored by capable senior leaders.

Finally, we should learn from the continuing Russian playbook of what are clearly war crimes. We need to appreciate that our opponents are going to utilize horrible tactics that are in fact war crimes: destruction of civilian infrastructure (including internet and cyber systems) with indiscriminate fires; false flag operations replete with deep fake videos; weaponizing civilian populations by creating the conditions for mass movements, taxing the logistics of the nation under attack; utilization of unprincipled mercenaries like the Wagner Group, Chechens, and Syrians; and at least threatening the use of chemical and nuclear weapons.

All of this has been called “hybrid” or “gray zone” warfare, and we’ve seen the Russians go to this list of dirty tricks in Afghanistan, Chechnya, and Syria over the past several decades. We need to do a better job of preparing to face these new realities on the battlefield. Obviously, we will not use these techniques, but we need to reverse engineer and blunt them in our training and equipment choices. This means training our troops to operate in chemical and biological environments more effectively; providing more civil support to local populations to defuse the impact of refugees; sharpen our ability to collect evidence to undermine fake videos and propaganda; and hone our responses to battlefield cyber attacks to include offensive options.

A new tactical triad is emerging in the 21st century battlefield—special forces, unmanned systems, and cyber will be far more important going forward. While legacy systems from tanks to destroyers to close air support aircraft will retain utility, we need to rethink our way of war. Sadly, there is much to learn from the battlefields of Ukraine. 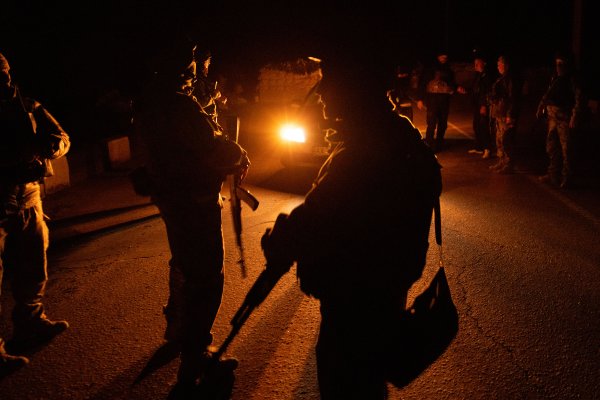 The Russians Fighting Putin in Ukraine
Next Up: Editor's Pick