Workers move the Annunciation to the Blessed Virgin of the Bohorodchany Iconostasis in the Andrey Sheptytsky National Museum as part of safety preparations in the event of an attack in the western Ukrainian city of Lviv, on March 4, 2022. The doors of the museum have been closed since Russia’s war on Ukraine began on Feb. 24.
Bernat Armangue—AP
By Olivia B. Waxman

The National Museum of Lviv in western Ukraine, one of the country’s biggest museums, was able to keep its collection intact through two world wars. And yet, over the last month, since Russia invaded Ukraine on Feb. 24, the museum has had to quickly dismantle its exhibitions.

“For the first time since the museum was founded in 1905, all exhibition rooms are empty—all museum items are wrapped, packed and are hidden,” Ihor Kozhan, museum’s director, tells TIME over Zoom. “When you talk, you hear echoes reverberating in the empty rooms. It hurts. It’s very sad.”

And the National Museum is not alone. During these weeks of Russian war against Ukraine, museums and archives across the country have been scrambling to protect artifacts and documents that represent Ukrainian history.

They’ve done everything from evacuating works of art over the border to hiding objects in safe storage. Cities are trying to safeguard monuments and statues by surrounding them with sandbags and covering statues with fireproof material to protect them from bombing and shelling. Some museums have been destroyed, such as Kuindzhi Art Museum in Mariupol and a history museum in Ivankiv, in the Kyiv region, which was known for a collection of 25 artworks by famed Ukrainian folk artist Maria Primachenko. On two separate occasions, Russian strikes have damaged parts of the Babyn Yar Holocaust Memorial Center site in Kyiv, which marks the 1941 Nazi German massacre of more than 33,000 Jews.

Read more: A Ukrainian Photographer Documents the Invasion of His Country

For many institutions, “they are struggling to figure out how to protect the collections, how to move [artworks], what to hide,” says Yuliya Vaganova, acting director of the Khanenko Museum in Kyiv, home to the country’s most significant collections of Western and Asian art.

Yet, amid this conflict, the stakes of preserving Ukraine’s culture and past have never been clearer.

‘A war against our history’

On the first day of the invasion, the literary museum in Kharkiv, Ukraine’s second biggest city, began the process of sealing windows with plywood. Now all of its exhibits have been moved to an underground bomb shelter. Writing to TIME on March 25 while the sound of an air-raid siren blared, the museum’s director Tanya Pylypchuk described how the institution had evacuated “the most valuable part of the collection” in the first few days of the war. Those items include books, manuscripts, and documents on “the complex relations between Ukraine and Russia in the 20th century” that “show Ukraine wanted to be part of Europe, not Russia.”

“Such materials were banned in the Soviet Union,” Pylypchuk wrote. “Modern Russia also does not accept this version of Ukrainian history.”

On March 24, 2022, at the Taras Shevchenko Monument in Kharkiv, Ukraine, dozens of volunteers are packing sand into bags, tying them off and loading them into bucket cranes and cherry pickers, while the volunteers standing on rising sandbag walls around the statues are piling them higher around the statue to protect them from the effects of Russian bombardment.
Marcus Yam/Los Angeles Times—Getty Images

“This is a war against our history, our culture,” says Ihor Poshyvailo, director of the Maidan museum in Kyiv, a history museum focused on pro-democracy efforts in Ukraine.

Since the invasion, Poshyvailo has shifted gears to helping museums obtain electricity generators and packing materials to preserve their collections, and coordinating donations of food and water for museum workers who have decided not to flee the country so that they can protect the art and artifacts. In a similar effort, Olha Honchar, director of a museum of totalitarian regimes in Lviv called Territory of Terror, organized the Museum Crisis Center to help fundraise for museum workers at small regional museums, which were short-staffed even before the war. “A lot of regional museums don’t have a security system,” Honchar says.

In this March 26, 2022, photo, a monument of Volodymyr the Great is surrounded by a a special protective structure on Volodymyrsky Hill in Kyiv to safeguard it from possible bombardment as Russian forces continue their full-scale invasion of Ukraine.
Mykhaylo Palinchak/SOPA Images/LightRocket—Getty Images

“Ukrainian cultural institutions—museums, national parks, libraries, theaters—they are not military objects, not oil depots or airfields, but still they are at risk,” Mykhailo Zakopets, a director of the museum Lviv Skansen, said in an email. “We see destroyed Chernihiv, Kharkiv, Mariupol and understand, that enemy’s goal is to wipe out everything that is about Ukrainian identity—the language, national culture, traditions. In this context our museum is [an] invaluable treasury of information.”

Read more: Here’s What You Can Do to Help People in Ukraine Right Now

Anatolii Khromov, the chief archivist of Ukraine, who oversees the country’s network of more than 200 archives, tells TIME that the Russians burned down the archive for Ukrainian Security Service in Chernihiv, which housed more than 12,000 folders about the KGB and the repression of the Ukrainian population by the Soviet regime in the 20th century.

He says the Ukrainian archive system is desperate for funding to finish construction of underground depositories for preserving documents and in the meantime has signed an online storage agreement with the National Archives in the United Kingdom to back up copies of select documents. As Khromov describes the value of the country’s archives, “It’s not just Ukrainian history. It’s world history.”

Backing up the past

And it’s not just physical objects that museums and archives need to protect. There are a couple of ongoing efforts in the U.S. to help scholars in Ukraine back up their research online and archive websites related to the country’s history in case there are cyberattacks or researchers’ homes are bombed.

The American Folklore Society is helping Ukrainian scholars upload their research—including songs, photographs, and videos recording dances and Ukrainian festivals and celebrations— to a Google Drive site. A U.S.-based project called Saving Ukrainian Cultural Heritage Online (SUCHO) boasts over 1,300 volunteers worldwide and more than 15,000 individual files uploaded to the website Internet Archive. Volunteers are producing replicas of museum websites—and in some cases, this work comes in the nick of time. For example, on March 3, a team worked through the night to back up the website for the state archive of Kharkiv before it mysteriously went offline.

“A website might be one of the only [pieces of] evidence that something existed and belonged to this museum, so this could potentially be evidence in future prosecutions for looting, for destruction of cultural heritage,” says Quinn Dombrowski, SUCHO co-founder and an academic technology specialist at Stanford University.

And Honchar is already thinking about the next big task for museums: telling the story of Russia’s war against Ukraine to future generations.

“Now the priority is to survive and save [museums’] collection,” she says, “but after the win, we have a lot of work to do to document this war in Ukraine.” 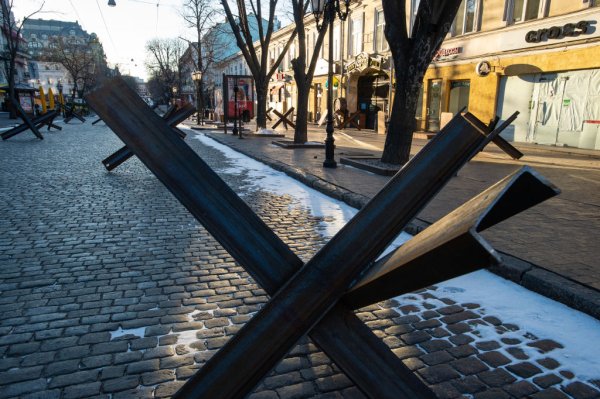 Holocaust Survivors in Ukraine Traumatized by Russian War
Next Up: Editor's Pick