President Joe Biden sought to clarify his call for the removal of Vladimir Putin, saying he wasn’t seeking regime change after European allies raised concern and critics said he was further inflaming tension with Russia.

French President Emmanuel Macron and the U.K. government distanced themselves from Biden’s stunning comment, which capped a speech in Warsaw to rally support for Ukraine against Russia. One administration official suggested Biden was influenced by stories of suffering he heard from Ukrainian refugees.

With a poll taken before Biden’s European trip saying that some 70% of Americans have limited or little confidence in his handling of the Ukraine war, the stakes were already high. After Saturday’s speech, Biden faced questions about the wisdom of going off-script and aides fanned out to say that the U.S. hasn’t adopted a policy of seeking regime change.

Biden gave a terse rebuttal Sunday in reply to a reporter’s shouted question as he left a church in Washington. Asked whether he wanted Putin removed and was calling for regime change, Biden said, “No.”

Julianne Smith, the U.S. ambassador to the North Atlantic Treaty Organization, cited Biden’s meetings with refugees at a Warsaw stadium hours before his address.

“In the moment, I think that was a principled human reaction to the stories that he had heard that day,” she said on CNN’s “State of the Union.” Earlier Saturday, Biden called Putin “a butcher.”

Stoking a potentially dangerous confrontation with the Russian leader would be a risky approach for Biden as domestic challenges — inflation, soaring gasoline prices and an economic agenda that’s stuck in Congress — pile up ahead of mid-term elections in November where his Democrats’ majority in Congress is at stake.

While the Kremlin let Biden’s remarks sink in by largely refraining from public comment, U.S. allies warned against implying a push to oust Putin — which could feed the Russian president’s narrative that the goal of the U.S. and its allies is to remove him from power, not just to stop his invasion of Ukraine.

“We shouldn’t escalate, with words or actions,” Macron, who has been a conduit to Putin, said on French television. U.K. Education Secretary Nadhim Zahawi, the cabinet member appearing on this week’s British morning shows, said Putin’s future should be “up to the Russian people.”

“It reminds us that message discipline has its virtues,” Petraeus said on ABC’s “This Week.”

Biden went to Poland, a former Soviet satellite country that neighbors Ukraine, to deliver one of the most consequential speeches of his presidency. After blaming Putin for the war, he closed by saying: “For God’s sake, this man cannot remain in power.”

Biden’s point was “that President Putin cannot be empowered to wage war or engage in aggression against Ukraine, or anywhere else,” U.S. Secretary of State Antony Blinken said Sunday in Jerusalem.

Republican lawmakers echoed the warnings from Europe, saying any regime change is in Russians’ hands and that the administration had sowed confusion at a critical time.

Biden’s remark is “more provocative” than NATO countries supplying MiG fighter jets to Ukraine, which the U.S. has rejected, Representative Michael McCaul, a Texas Republican, said on CNN. “I know it was off the cuff, but whatever the president says carries a lot of weight.”

Ahead of his European trip, Biden’s approval rating fell to a new low of 40% in an NBC News poll, which also suggested that the war isn’t helping his standing.

Only 12% expressed a great deal of confidence in the president’s handling of Ukraine. More than 80% were concerned that the war would lead to the use of nuclear weapons and 74% were worried that the U.S. would send combat troops into Ukraine. 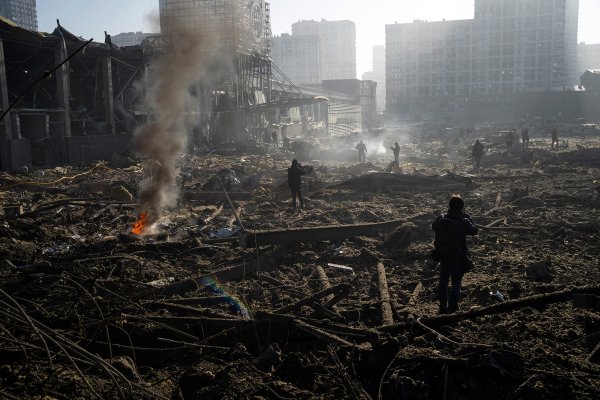 Ukrainians Don't Just Blame Putin For the War. They Blame Russians.
Next Up: Editor's Pick