From Bridgerton to Sanditon, We Can’t Quit the Regency Era

Season two of Shonda Rhimes’ Bridgerton is out on Netflix—and eager viewers will waste no time immersing themselves in its remarkable candy-colored London ballrooms and countryside estates. Bridgerton’s setting is a version of Regency England with a multiracial, bright, and sexy modern overlay, a place where the marriage market is a game to be played with cunning—until, of course, love (and lust) show up to mess with everyone’s plans.

The hit Shondaland show based on Julia Quinn’s romance series isn’t the only Regency-era confection to grace our screens this year. Sanditon, a Jane Austen adaptation, returned to PBS in March after being canceled in 2019 and subsequently revived. And the dating reality show The Courtship, currently airing on the USA network, dresses its bachelors in breeches, flies them to England, and makes them pay homage to a hopeful bride and her family—wooing her the old-fashioned way.

The Regency era, named so because England’s Prince Regent sat on the throne due to his father’s illness at the turn of the 19th century, is once again popular right now. So what exactly, in 2022, is the appeal of a time in European history best known for the Napoleonic wars?

The enduring influence of Jane Austen

The Regency era lives on in the cultural imagination as a time of romance, especially for independent-minded heroines finding love in unlikely places, thanks to both Jane Austen, whose novels like Pride and Prejudice and Emma continue to inspire adaptations, and the popular Regency Romance genre, which encompasses period-accurate novels in the style of writer Georgette Heyer as well racier, more modern-feeling novels with Regency settings, like Quinn’s. That instant association—divorced from the broader scope of history—has allowed creators like Rhimes and Bridgerton showrunner Chris Van Dusen to serve up romantic heat on a particularly elegant platter, just in time to reach an audience starved for escapism and pleasure.

The COVID-19 pandemic drove readers to “the comfort food” of Regency fare, according to Laurel Ann Nattress, who runs the fan site Austenprose. Nattress says her site saw a surge of interest in novels and films about the Regency era when COVID-19 lockdowns began, a good several months before Bridgerton released. And once it debuted in 2020, Bridgerton was a cultural giant, quickly becoming the most-watched shows on Netflix at the time of its premiere. The popularity likely played a part in the revival of Sanditon, says Margaret Sullivan, author of The Jane Austen Handbook and editor of Austenblog. The show was renewed for a second season after fan organizing that included a massive beach art project, a 88,000-signature petition, and numerous social media campaigns. “Sanditon was dead, it was buried. There was a very persistent fandom, but I think they should thank Shonda Rhimes,” Sullivan says.

Read More: What Jane Austen Can Teach Us About Staying Home

Austen, whose six novels appeared between 1811 and 1818, has long saturated the culture. The thriving Regency Romance genre is full of witty lines that obliquely reference her work. In the first episode of The Courtship, Austen quotes are mangled for “comic” effect, every few minutes. The social conventions of her novels—women’s dance cards being filled up by suitors, hunting parties, dinners around long tables—are familiar enough to viewers that the universe is easy to slip into. Seeing the low-cut dresses and tight breeches of Regency England in The Courtship likely evokes Matthew MacFayden’s Mr. Darcy flexing his hand with desire in Pride & Prejudice, or a similar scene of longing from another Austen film (In fact, there’s a tumble into a lake in season 2 of Bridgerton that directly references the infamous Colin Firth “wet shirt” scene in the 1995 Pride and Prejudice miniseries).

Reimagining the Regency era in 2022

A still from 'The Courtship'
Sean Gleason/NBC

Beyond Austen, the Regency era remains “vague” in the popular consciousness, says Lynn Festa, a professor of English literature at Rutgers University. “Everyone knows the Victorian period, the British Empire. But the Regency is a bunch of bonnets,” she says.

In reality, Festa says, the Regency era was built on vast “structures of exploitation.” Austen’s writing includes brief references to the way slavery’s profits fed the lifestyle of British society, a bitter truth that is examined more openly in the new season of Sanditon. The social stratification, abject poverty, and oppression of women we might associate with the Victorian era was present in the Regency era, too. Yet our cultural imagination doesn’t go to these troubling places as quickly, opening the door to what Bridgerton’s creators have described as a “fantasy” Regency that, while rooted in history, is actually more tolerant and harmonious than what you might find in 2022 America—a universe where interracial relationships receive no condemnation, women speak their mind, escape to the seedy side of town, and flirt with few lasting consequences, while every good parent ultimately counsels their child to choose love over convenience. In season 2 of Bridgerton, the heroines are the Sharmas, sisters newly arrived in England from Bombay. They are easily welcomed, despite a few raised eyebrows about their mother’s hasty marriage. Brexit-era England, this is not.

Both The Courtship and Sanditon have racially diverse casts and characters, too, marking a departure from previous Austen-inspired efforts. Sanditon‘s supporting cast features a Black heiress (as written by Austen) who is best friends with the heroine, and The Courtship gives its heroine, Miss Rémy, also a woman of color, regal authority over not just her love life, but the whole conceit. The ideal of racial coexistence presented by these series fits in with the optimism of the Regency Romance genre, in which happy endings tend to resolve interpersonal and social tension, heroines narrowly get away with flouting convention, and heroes are always talented at satisfying their wives in bed. The Bridgerton team gestures at this: technicolor costumes, string quartets playing contemporary pop songs, and cheeky cutaways remind the audience that even in serious moments, this is supposed to be fun. It’s hard to forget, especially in the lighter, more humorous second season.

The equation of a Regency story with a final, well-earned wedding scene helps explain why fans of Sanditon, which was based on an unfinished Austen fragment, organized so passionately for its revival after the first season closed with unexpected heartbreak. The “Sanditon Sisterhood’’ expressed a yearning that many fans of onscreen romance feel. The classic, well-made rom-com (itself descended from Austen) has faded from its prime place in the film landscape, barring an occasionally delightful exception. In its place, shows like Bridgerton and Sanditon can offer us the kind of swoon-worthy moments we don’t see elsewhere, like the Duke and Daphne holding hands in a gallery in Bridgerton’s first season, and in Sanditon, a scene where the love interests row a boat, hands touching, which became the subject of many, many fan-made Youtube videos. In the new season of Bridgerton, the heroine herself flashes back to these “slow burn” moments where she almost kissed the hero—rattling her porcelain teacup with the heat of the memories. To add to the fun, at least on Bridgerton, the characters eventually go further.

“I think that’s what appeals to a lot of people that might not even like Jane Austen,” Sullivan says. “Actual sex scenes.”

As many writers and critics have noted, there is a tightrope being walked between conservative and progressive approaches in this approach, as in any kind of art that explores history with an inclusive modern touch, like Hamilton. In the face of deep society-wide issues like America’s unfinished racial reckoning, #MeToo, and the pandemic, the romance plot is undoubtedly a kind of retreat from the broad to the narrow. The Courtship is honest about this, offering Miss Rémy the world of ballrooms and sitting rooms as an explicit antidote to the complexity of modern life, and especially modern dating.

It’s a bit retrograde, to be sure. But there’s also something delightful in the way these Regency shows openly cater to a largely diverse, largely female audience, so much so that this historical era, which was deeply oppressive for people of color and women, has become a vehicle for their enjoyment and fantasy fulfillment. It’s an impressive feat. No wonder we’re all tuning in.

For more of TIME’s culture coverage, subscribe to our entertainment newsletter, More to the Story, by clicking here. 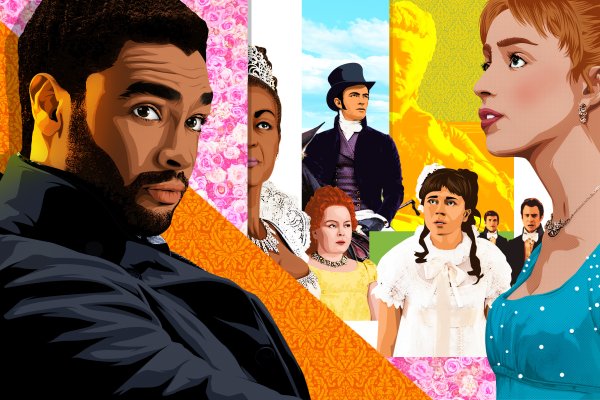 Bridgerton Fans Were Right: The Show Doesn’t Work Without Regé-Jean Page
Next Up: Editor's Pick