With All Eyes on BA.2, Here's What Experts Say Might Happen in the U.S.

For the last two years, the U.S. has been stuck in a cycle of COVID-19 case spikes and lulls. Cases rise dramatically, then drop off—and the process repeats.

Several times, these surges have been preceded by rising case rates in Europe—such as before last year’s Delta wave and the start of last winter’s Omicron spike—which is why experts have been carefully monitoring a recent increase in cases there. More than 5.2 million COVID-19 infections were reported across Europe during the week ending March 20, according to World Health Organization data, and countries including the U.K. have also reported rising hospitalization rates.

The spike has likely been caused in part by the BA.2 variant, a relative of Omicron that studies suggest is at least 30% more contagious than Omicron. The number of cases reported in Europe was roughly the same during the week ending March 20 compared to the prior week—suggesting a possible plateau—but countries including Germany, the Netherlands, and the U.K. are still reporting high levels of infection.

The question now is whether the U.S. will follow in Europe’s footsteps, as it has before. About 35% of COVID-19 cases sequenced in the U.S. from March 13-19 were caused by BA.2, according to U.S. Centers for Disease Control and Prevention (CDC) data. In the CDC monitoring region that includes Maine, New Hampshire, Vermont, Massachusetts, Rhode Island, and Connecticut, more than half of cases are now linked to the variant. Wastewater surveillance data also show that viral levels are rising in certain parts of the country, particularly the Northeast.

No one knows for sure what will happen next, and some experts are somewhat split in their predictions—but the consensus seems to be one of cautious optimism.

Dr. Anthony Fauci, White House chief medical advisor and head of the U.S. National Institute of Allergy and Infectious Diseases, said on March 20 there will likely be an “uptick” in U.S. cases this spring, but “hopefully, we won’t see a surge. I don’t think we will.”

Syra Madad, an epidemiologist with Harvard’s Belfer Center for Science and International Affairs, agrees that there will likely be an increase in cases and possibly hospitalizations due to BA.2, but she is hopeful that widespread population immunity—through either vaccination or prior infection with Omicron—will prevent a major spike.

Despite his very recent predictions of an impending BA.2 surge in the U.S., Dr. Eric Topol, founder of the Scripps Research Translational Institute, says he is now guardedly hopeful. It could take a few more weeks to see what BA.2 will do in the U.S., so nothing is certain—but if the U.S. were going to follow trends in Europe, Topol says he expects that case counts would have started to rise significantly by now, since BA.2 is already prevalent in the U.S. Instead, the U.S. is currently reporting about 27,000 new infections per day, the lowest average number since summer 2021.

“The fact that we’re not seeing anything is surprising,” Topol says. “It’s very gratifying, in my view, because I love to be wrong when I’m trying to predict that something bad could happen.”

The monster U.S. winter Omicron surge may be providing some armor against a new wave, says Ali Mokdad, a professor of health metrics sciences at the Institute for Health Metrics and Evaluation. By some estimates, at least 40% of the U.S. population was infected during the Omicron wave, though it’s hard to say for sure since many people used at-home rapid tests that aren’t included in official case counts. Some preliminary research suggests that people infected by the original Omicron variant are unlikely to get sick from BA.2—so high levels of natural immunity, combined with coverage from vaccines, may help stave off a surge, Mokdad says. (Vaccines didn’t hold up as well against Omicron as previous variants, but they do still provide strong protection: while the original Omicron variant was circulating, fully vaccinated people were about 2.5 times less likely to test positive for COVID-19 than unvaccinated people, and mRNA-based shots were still at least 90% effective at preventing death and disease severe enough to require mechanical ventilation.)

Why, then, did BA.2 take off in European countries that also experienced Omicron surges over the fall and winter and have higher vaccination and booster rates than the U.S.? It’s still unclear, but timing may have played a part. BA.2 began spreading in Europe during the winter months, when people are mostly inside and pathogens transmit easily. Many European countries had also recently dropped restrictions such as mask mandates, opening the door to a jump in infections, Mokdad says. Waning immunity from vaccines and prior infections may have also played a part, he says.

But—for better or worse—many parts of the U.S. have been living largely without COVID-19 precautions for many months, so Mokdad doesn’t expect BA.2 to cause a big shock to the system here. His models suggest the U.S. will see a sustained decline in cases through the spring and summer, before they pick up again in the winter when people are forced back indoors. If another new variant emerges, however, that could alter the projections.

Whether or not there’s a “next” surge, we’re still in one, says Dr. Ebony Hilton-Buchholz, an associate professor anesthesiology and critical care medicine at the University of Virginia. Baseline levels of COVID-19 remain high, with hundreds of people dying each day. “We’ve never left the first wave,” she says. “We need a peak and a trough, and we haven’t reached the trough. We keep creating new peaks.”

Hilton-Buchholz says U.S. policymakers should focus less on gaming out the pandemic’s timeline and more on promoting things that are proven to work, such as wearing a high-quality mask, improving indoor ventilation, and encouraging people to get vaccinated—including with boosters, which have so far failed to catch on widely in the U.S.

Madad agrees that it’s too soon to let up on infection-prevention measures. “There’s this dangerous narrative that cases don’t matter and it’s all about hospitalizations,” she says, but that ignores complications, such as Long COVID, which can strike people who experience even mild cases. To help prevent infections that could lead to complications, individuals may want to keep wearing masks even if they aren’t mandated, she says.

Despite their optimism about BA.2, both Mokdad and Topol agree that the U.S. is letting public-health measures and pandemic funding lapse too soon. Even if BA.2 does not lead to a surge, a totally new variant—one to which people do not have some natural immunity—could emerge at any time, and the U.S. would not be prepared to fight it. Congress did not include additional funding for COVID-19 relief in a March spending bill, which the White House says will endanger ongoing testing, treatment, and vaccination efforts. The Biden Administration has asked for an additional $22.5 billion to pay for those programs and warned that it currently does not have enough money to purchase additional booster doses for all Americans, should they become necessary.

Inadequate funding could also make it harder to track the virus through testing, genomic sequencing, and wastewater surveillance, Topol notes, and there’s little hope of preventing surges if you can’t see the virus coming. (Madad suggests ordering more free rapid at-home COVID-19 tests from the government now, while you still can.) 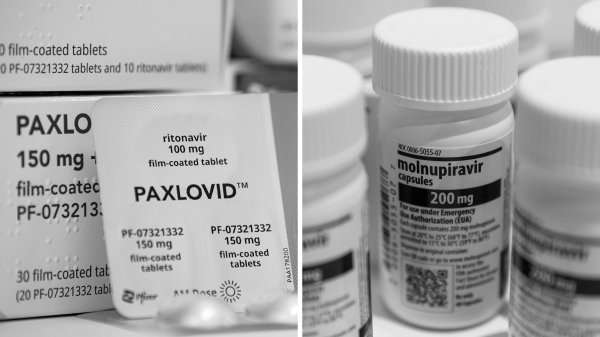