Pachinko Is a Gorgeous Adaptation of a Literary Masterpiece, Marred by One Baffling Choice

When Japan annexed Korea in 1910, the occupation was more than just a political reality. As Korean resistance met with ever harsher responses from the colonial government, Japanese leaders took aim at the culture itself. A strategy of forced assimilation meant the destruction of cherished art, historical documents, and buildings dating back centuries. Koreans saw their language, religion, commerce, agricultural industry, and news media supplanted by the invaders’ institutions; they even had to adopt Japanese names. Meanwhile, with scarce employment prospects in their homeland, hundreds of thousands of Koreans had little choice but to relocate to Japan, where they were mostly relegated to menial jobs and faced brutal discrimination.

This atrocity, whose impact on the Korean people still reverberates in the present, forms the backdrop of Min Jin Lee’s magnificent 2017 novel Pachinko. The rare National Book Award finalist that is also a bestseller, populated by rich characters and suffused with emotion, Lee’s story comes to television with a lavish adaptation premiering March 25 on Apple TV+. By all accounts, it was not easy bringing this epic, multigenerational, multilingual saga of immigration and family to the small screen. Creator Soo Hugh (The Whispers), working with filmmakers Kogonada (After Yang, Columbus) and actor turned director Justin Chon, as well as a uniformly excellent ensemble cast, beautifully conveys the sweep and spirit of the novel. The only major misstep is a structural choice that undermines Lee’s carefully paced storytelling.

Spanning most of the 20th century, Pachinko opens in the woods of rural, Japanese-occupied Korea in 1915. Yangjin—a young woman born into poverty, married to the cleft-lipped son of a family that owns a boarding house and reeling from the deaths of three consecutive infant sons—has come to secure a blessing for her fourth pregnancy. “There is a curse in my blood,” Yangjin (Inji Jeong) tells the female shaman. Then the action jumps three-quarters of a century and halfway around the world, to New York in 1989. An ambitious young finance guy, Solomon (Jin Ha), strides confidently into a meeting with a pair of white, male superiors, who unceremoniously inform him that he’s not getting a promotion they all know he’s earned.

When we meet Yangjin, she’s just months away from giving birth to the show’s heroine, Sunja, whose life will be shaped by what she endures during the occupation. Solomon is Sunja’s grandson. And this eight-episode first season (of four that Hugh hopes to make) patiently fills in the intervening decades, though not with the simplistic tale of immigrant bootstrapping that newcomers to Lee’s story might expect. In one of the two parallel narratives, set in the ’30s, a teenage Sunja (played with grace, vulnerability, and grit by Minha Kim) becomes entangled with a Korean businessman, Koh Hansu (South Korean megastar Lee Min-Ho), whose flexible morals have helped him prosper in Japan. Their romance catalyzes her departure for Osaka—although, again, not for the reason you might assume. The other core story line follows Solomon’s return to Osaka, where his family still lives, with a plan to prove he’s worthy of a VP title by facilitating a crucial deal that only an employee of Korean heritage could possibly close.

There is a symmetry to this structure, one that magnifies some of Pachinko’s most salient themes. Even though they’re poor in the ’30s and relatively rich in the ’80s, the family is constantly forced, in both eras, to choose between impossible binaries: money and integrity, safety and authenticity, assimilation and persecution. But it’s not exactly difficult to glean these ideas from Lee’s chronological structure, which I greatly prefer. There’s a trend toward multiple timelines in TV these days; complicated storytelling has become the marker of prestige drama—of television as art. Yet Pachinko was art long before it was TV. The bifurcated narrative only adds too many transitions that disrupt the series’ emotional throughline and sows confusion around characters that turn up episodes before they’re properly introduced. Readers eager to see the book’s absorbing middle chapters onscreen will have to cross their fingers for a renewal.

Such a big miscalculation might sink a weaker show, but in every other sense, Pachinko—like its heroine—is too singular and alive to fail. As portrayed by Kim in her youth and Minari Oscar winner Youn Yuh-jung in older age, Sunja epitomizes immigrant persistence without devolving into a stock character. Hugh avoids reducing her to either a martyr or a plucky success story. It was a wise choice, and one that has only become possible in the streaming era, to mix Korean, Japanese, and English dialogue; color-coded subtitles efficiently convey how characters combine tongues and code-switch. The art direction surpasses that of TV’s most immersive historical dramas, including The Crown. Complementing this intricate mise-en-scène and the cast’s fiercely physical performances is cinematography that lingers on textural details: the hem of a wedding dress, the pudgy foot of a newborn, the snowy brilliance of Korean white rice.

Yes, this adaptation is less than perfect; the disservice it does to the structural integrity of a novel that gains momentum and poignancy as the decades progress shouldn’t be understated. The overall impression is of an epochal masterpiece cut into snippets and reassembled out of order. That’s frustrating. Even when you account for its shortcomings, though, TV’s Pachinko remains the rare show of both artistic and historic import. Everyone should see it. But maybe read the book first. 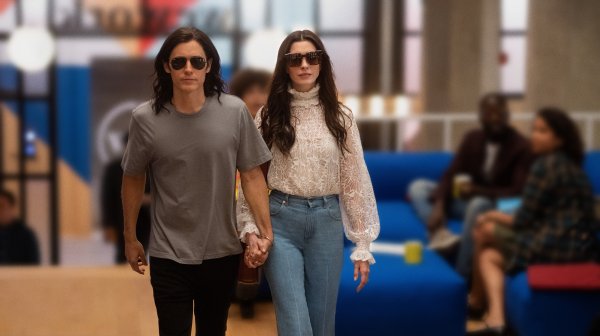 The True Story Behind WeCrashed
Next Up: Editor's Pick