Before Russia invaded her country, Julia Pavliuk had what she considered a rather idyllic life in the town of Irpin, Ukraine, on the outskirts of the country’s capital city of Kyiv. But on March 5, despite desperately wanting to stay, she and her husband Oleh fled their home with their 6-month-old daughter Emma and set off for the city of Rivne, a city in western Ukraine, where strangers allowed them to stay for free in a spare apartment.

Photographer Maxim Dondyuk snapped a photo of Pavliuk, 25, on the day of her evacuation, distraught and walking alongside a soldier who was trying to comfort her baby. TIME spoke with Pavliuk on March 18 about the photo, which appeared this week on the cover of TIME; the family’s journey; and the challenges of being a young mother during a time of war.

A Ukrainian soldier helps Julia Pavliuk and her daughter Emma evacuate the Kyiv suburb of Irpin, which Russian forces have tried to seize as part of their push to encircle the capital om March 5
Maxim Dondyuk

Tell me about yourself and your family.

My name is Julia. We are from Irpin, Ukraine, where I have lived for almost all of my life. I have a husband and 6-month-old daughter. We had a perfect life in our modern, beautiful town, which many consider as the perfect place for families because there are so many parks and new houses. But unfortunately now it is ruined. We left on March 5 and now we are in Rivne. When we arrived, local people greeted us and they took us in.

How did you get to Rivne? Who were these people who took you in?

It was an eight-hour train journey, and these people picked us up from the station. It was our first time meeting them; our friend gave us their contact information. It was perfect. To be honest, I never knew that such kind people existed. Can you believe they allowed us to stay in their spare apartment for free? They said we could live here as long as we need. It was a miracle.

Read More: A Ukrainian Photographer Documents the Invasion of His Country

What’s it been like being a mother in this stressful situation?

It’s very stressful with a 6-month-old child when you hear explosions. There’s a lot of anxiety because you just want to be safe and make sure everything will be OK for you and your kid. It’s really scary. In this situation, our minds just concentrate on what we need to do to save you and your kid. I’m lucky my daughter is so young and not a few years older because I think older children would understand what’s happening better. I’m not sure our daughter feels the situation like we feel it.

What have you been most focused on during this time?

I’ve been thinking about safety. Sometimes you just keep hearing loud sounds, but I just have to focus on making everything safe. I think if I were alone and didn’t have my baby I would just cry and just fall and sit on the floor and cry, but when you have kids, you are responsible for them and you understand that you need to be strong. My child gives me strength.

Are there any particular moments that stand out to you from over the last few weeks?

The day we evacuated was the most terrible day of my life. It was a really scary situation, and I continue to have dreams about how I got here. Even here, in safety, I’m scared of loud sounds. I hear neighbors close the door and it startles me. I don’t know if this will ever go away. And of course, I will always remember the people who helped me in this hard situation. When you don’t know whether you will live or die, the people who help you are like miracles. We have had a lot of support. We understand that we are not alone. We have good people in our country.

Julia Pavliuk posted this photo of her husband Oleh, holding their daughter Emma on the train to Rivne, Ukraine on March 6
Courtesy of Julia Pavliuk

Can you tell me about the day you evacuated?

We didn’t want to leave our home until the very, very end. We decided to leave because the sound of bombing was unbearable to live with, especially with our baby. So March 5, we went by foot to a local church in Irpin where people were going for evacuation, along with my husband’s mother and brother. When we arrived, it was filled with people and animals. From there, I saw a destroyed bridge and overturned car. It all looked like some kind of horror movie. I couldn’t believe it. At first, soldiers led women and children through the bridge so my husband had to stay behind. When people saw that I had a baby in my arms, they immediately let us go ahead. But I was worried because we had been separated from my husband, so we stood near the bus stop, waiting for him while hearing the sounds of explosions.

Read More: ‘I Have No Other Choice.’ The Mothers Returning to Ukraine to Rescue Their Children

So did you reunite with him before making the journey to Rivne?

I tried to call him, but I couldn’t get through. We just waited for him for what was probably more than 20 minutes. It might have been shorter, but it felt so long. It was the most awful thing. I didn’t know what to do, so I just waited and hoped that every man I saw emerge was my husband. I was crying and my child was crying. It was cold in the street where we were standing. I tried to breastfeed her, but she wouldn’t stop crying. The soldiers kept shouting at us to get onto the bus because it was dangerous to stand there, but it was hard to leave without my husband. So I stayed until he came.

I had one small bag, mostly with things for my child, and clothes. My husband carried the biggest bag on his shoulder with documents, clothes, toiletries, and two laptops. In this situation you realize the most important thing is just your life. Of course we left some jewelry and expensive stuff at home, but it doesn’t matter now. We just wanted to be in a safe place.

What did you think when you saw the picture on TIME’s cover? What was going on in that scene?

It’s not my best picture, although it does capture the atmosphere well and it gives us the opportunity to tell the world what is happening. Yesterday, I received many kind messages of support with people wishing that we remain safe. I remember the soldier was trying to help me with my baby. I don’t remember it clearly, but I was trying to raise my hands to show my husband where I was and he was trying to calm my child because she was crying.

What scares you the most about the war and this moment that we’re in?

We’re only one of many families who continue to suffer. People and kids are dying in our country.

Are all your family and friends safe? Is anyone unaccounted for?

Fortunately, we are all safe. We feel lucky because I have heard information about other families who lost relatives and I feel really sorry for them.

How are you passing the time in Rivne now?

We’ve been here since March 5. To be honest, it has been very boring. We just are waiting for this whole situation to end. Before all of this, I never used to read the news. Now I read the news maybe 10 or more times a day.

Julia Pavliuk who appeared on a March 28/ April 4, 2022 cover of TIME with her husband Oleh Pavliuk, now in Rivne, Ukraine
Courtesy of Julia Pavliuk

Are you and your husband employed? What’s your financial situation?

I used to work as an office manager and am now on maternity leave. My husband is a project manager at an IT company. He’s not fired, but the company isn’t paying him as much; he’s making less than half his original salary. We are able to buy almost everything we want, but we are trying to save money because we don’t know what the next few months will be like. Fortunately, we have some savings.

What is your hope for the future?

I hope that in the near future this war will stop, and I hope that no one will feel this emotion that we feel. We live in the 21st century and it is absolutely terrible. Our children should live in peace. This is a cruel situation. If someone told me a year ago that my country would be in the middle of a war, I would tell them, “You’re crazy.” Now it’s a terrible reality. I hope that it will be the last war in the world.

What message do you want to send the world about the experience of your family and others like you?

This interview has been lightly edited and condensed for clarity 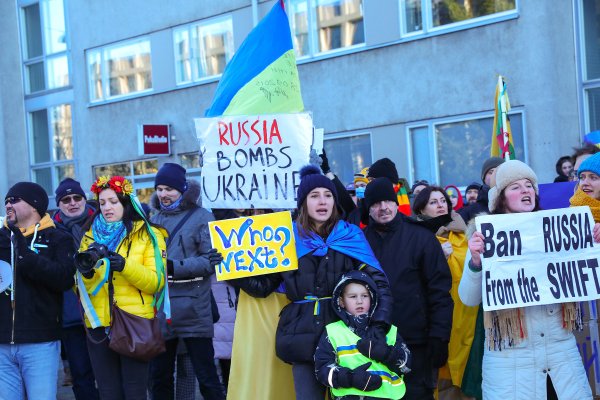 Finland and Sweden Wrestle With the Benefits of Joining NATO
Next Up: Editor's Pick