How the Arab World Is Responding to the War in Ukraine

Syrian artists Aziz Asmar and Anis Hamdoun paint a mural amid the destruction, depicting the colours of the Russian and Ukrainian flags, to protest against Russia's military operation in Ukraine, in the rebel-held town of Binnish in Syria's northwestern Idlib province on February 24, 2022.
Omar Haj Kadour—AFP/Getty Images
Ideas
By H.A. Hellyer

H.A. Hellyer, a scholar at the Carnegie Endowment for International Peace in DC, is senior associate fellow at the Royal United Services Institute in London and fellow at the University of Cambridge. Follow him on Twitter @hahellyer

The West may have quickly united against Russia after it invaded Ukraine. But many in the Arab world took their time, pausing just long enough to leave messages for Washington.

The first United Nations Security Council resolution against the invasion of Ukraine was proposed on Feb. 25, and the United Arab Emirates, a key U.S. ally, abstained, later issuing public statements that some interpreted as considering Russia’s stated grievances legitimate. Three days later, the Arab League, which brings together 22 Arab states, issued a statement that failed to condemn Russia’s invasion and offered little support to the Ukrainians.

A couple of days later, however, the situation had changed. When U.N. General Assembly resolution condemning Russia passed overwhelmingly its backers include the UAE, as well as Saudi Arabia and Egypt, two of the most powerful Arab states. Clearly, Western—particularly American—pressure had done its work. But considering the alignment of the near totality of the Arab political elite with DC, and with the West in general, why had such pressure even been required? Especially over such a clear-cut case of the breaking of a state’s sovereignty, which even the most dictatorial of autocrats in the region are keen to uphold?

Several factors are at play here.

There’s only one Arab leadership that is genuinely pro-Putin: the Assad regime in Syria. Every other Arab state is generally prioritizes its Western ties, and none is trying to pivot to Moscow. But this does not mean Arab states are hostile to the Kremlin. They generally see in Russia a substantial global power that continues have relevance in their region—and sometimes intervenes in ways that are helpful to their interests. Moscow is also a useful capital to publicly ‘flirt’ with when relations are strained with Western capitals (particularly D.C.).

Read More: How Zelensky Defended Ukraine and United the World

So Arab states’ complex reactions to the Ukraine invasion is far less about Russia than it is about the West. Over the last decade, Arab leaders have had a growing sense that the West is an unreliable partner. Part of that has to do with their autocratic expectation that the West would stand by Western-allied autocrats like Egypt’s Hosni Mubarak during the Arab uprisings of 2011, a stance that frankly would have been consistent with Western policy until then and since. But there has also been a keen awareness that the West in general, and the U.S. in particular, has failed to show the will to hold its own in several theatres: from the so-called ‘red-line’ in Syria over chemical weapons in 2013, to Russia’s annexation of Crimea in 2014, to the chaotic abandoning of Afghanistan in 2021. Many Arab leaders also note with concern that America’s “pivot to Asia” is a pivot away from the Arab region.

In the early days of the Russian invasion, it was clear that Arab states wanted to keep their options as open as possible, and not alienate Moscow if they didn’t need to. That doesn’t make them pro-Moscow; it means they assess that the world as becoming more multi-polar, and that the West had not given much indication that there would be much of a cost to trying to be “creatively neutral.”

That’s changed. The West has signaled that Russia’s invasion is not a case where ‘neutrality’ is going to work, at least not if states want to continue the same kind of close relationship that has so far characterised most Arab-Western ties. Arab states know that if they want to continue with their modernisation drives—in terms of technical developments, technology and investment—there is no substitute at present for the West.

That does not mean tensions disappear. The de-facto ruler of Saudi Arabia, Mohammed bin Salman, who is currently still something of a pariah in D.C. owing to the widespread belief he personally ordered the operation that led to the murder of Jamal Khashoggi, is trying to use the current situation to extract a concession from President Biden. MBS wants recognition of his de-facto status—as former president Donald Trump gave him—and he’s willing to resist pumping more crude oil to lower the price of oil, which surged in the aftermath of the Russian invasion, until he gets that recognition. Indeed, some recent reports indicate MBS might get his way.

It’s doubtful any of this is going to look the same a year or two from now. The West is currently remodulating how it engages internationally—and all of that is going to have an impact on various relationships with the wider Arab world. In response, Arab states are going to making their own choices about how to navigate those same relationships. But it’s not an underestimation to note that the Russian invasion has called into question some very basic assumptions in those relationships—and it remains to be seen what the new assumptions are going to be. 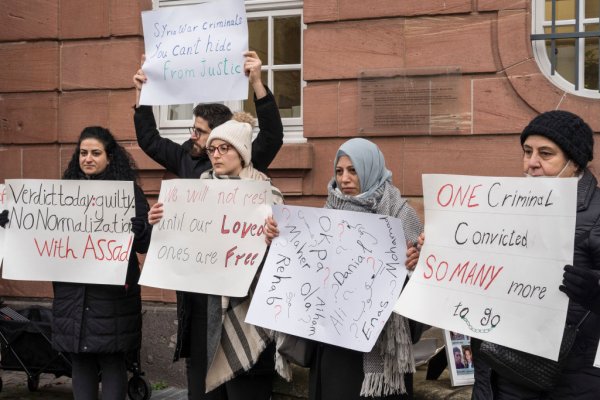 Column: Long Road to Justice for Syria's Torture Victims
Next Up: Editor's Pick