An illustration of the 1835 New York City fire.
Library of Congress/Corbis/VCG/Getty Images
By Daniel S. Levy

On Dec. 16, 1835, a gale blanketed Manhattan with snow. The merchant Gabriel Disosway remembered how when night arrived it was “the coldest one we had had for thirty-six years.” Then at 9 p.m., members of the City Watch discovered a fire burning at Comstock & Andrews on Merchant Street. Officer William Hays recalled how “We found the whole interior of the building in flames from cellar to roof … Almost immediately the flames broke through the roof.”

Firemen raced to the blaze. They tapped nearby hydrants, and in search of additional water headed to the foot of Wall Street to break through the East River’s ice and pump more. But it was so cold out that when the water flowed, the strong wind slapped it back into their faces and they found it impossible to stop the flames.

Crooked streets filled lower Manhattan, and within 15 minutes, Watchman Hays realized that “fully fifty buildings were blazing.” Former Mayor Philip Hone rushed down from his Broadway home, and later wrote how “the progress of the flames, like flashes of lightning, communicated in every direction, and a few minutes sufficed to level the lofty edifices on every side.”

Throughout downtown Manhattan merchants seeking to save their stock emptied shops, and mahogany tables, crates of wine, silks, broadcloths, and boxes of cutlery cluttered the streets. A prominent spot on the city’s eastern edge was Hanover Square. But as goods piled up, people trampled fabrics and broke furniture. Then, according to the New York Sun, “a gust of flame, like a streak of lightning,” shot “across the square, blown by the strong wind, and set fire to the entire mass, which it in a few moments consumed to cinders, and then communicated to the houses opposite.”

Soon downtown Manhattan—for a third of a mile from Broad to South Streets and a similar distance down to Coenties Slip—was engulfed in flames. Disosway climbed to a building’s roof to get a sense of the extent of the blaze, and wrote how it was an “ocean of fire, as it were, with roaring, rolling, burning waves … tottering walls and falling chimneys, with black smoke, hissing, crashing sounds on every side.”

The blaze indiscriminately destroyed businesses, churches, homes, and stores, the heat proved so intense it melted metal shutters, doors, and gutters. Disosway then reported how “a terrible explosion occurred near by with the noise of a cannon. The earth shook.” Soon “a second blast took place, then another and another.” The detonations were produced by saltpeter stored in a warehouse. Liquor and gunpowder casks likewise exploded. On Manhattan’s docks, barrels of sperm and other oils ignited. Turpentine spilled from containers, and the New York Evening Post reported that the contents “poured down into the slip like a stream of burning lava, and spread out over the surface of the river for several hundred yards, sending up a bright flame, and giving the appearance of the river being on fire.”

At one in the morning, all the fire hoses laid frozen, and Mayor Cornelius Lawrence, fire chief James Gulick, James Alexander Hamilton—Alexander Hamilton’s son—and others decided they needed to blow up buildings to create a fire break and staunch the flames. Hamilton scoured stores for gunpowder. New York American editor Charles King set off for the Brooklyn Navy Yard to seek more explosives. Army Lieutenant Robert Temple and two others meanwhile rowed to Governors Island and found 100-pound kegs of powder.

Forty-Eight Exchange Place had been chosen as the building to blow up. As fire fell through the hatchway, the men set a cask into the cellar and spread a train of powder across the floor. Hamilton lit the fuse, and as former fire chief Uzziah Wenman recalled, “the whole building seemed to rise up and quiver.”

Unfortunately, the blast did not work as planned, and they had to then blow up No. 52. That explosion slowed the fire, and they soon leveled other buildings. By the early hours of December 17, the seemingly relentless march of the fire had been stopped. Hamilton returned to his residence and recalled, “when I got to my parlor I fainted.”

The area of the Great Fire was largely a business district, and only a few people died. The fire, however, destroyed 674 buildings at a cost of $20 million, equivalent to $600 million today. James Gordon Bennett toured what quickly became known as “Burnt District.” The New York Herald editor wrote about the devastation, families’ wrapped in blankets, merchants weeping, crews trying to salvage goods, others making bonfires with once expensive products to keep warm, and the difficulty of getting through what were once streets since they were littered with merchandise and heated bricks. As Bennett observed there was “nothing but smoke, and fire, and dust.”

Ruins of the Merchant's Exchange N.Y. after the Great Fire of 1835.
The Miriam and Ira D. Wallach Division of Art, Prints and Photographs: Print Collection/The New York Public Library

When Hone surveyed the wreckage, he found himself “fatigued in body, disturbed in mind.” Newspapers filled columns with lists of losses. One merchant lost $300,000 in silks alone. Nicholas Biddle, the president of the Second Bank of the United States, came to town and offered the bank’s help. The Treasury Department instructed the Customs Department to extend time on bonds for those affected. Albany authorized a $6 million loan, equal to about $180 million today.

The day after the fire, silk merchant Arthur Tappan summoned a builder and made arrangements for a new building. The Board of Aldermen discussed the need to widen and fix the streets. By January 1836, the American Monthly Magazine reported, “the click of trowels is already heard among the half-cooled bricks, and the dust of mortar is even now mingling with the smoke from the still shouldering ruins.” New buildings rose along Wall Street and elsewhere in the Burnt District, and Mary Sturges observed how the city was “like a Phoenix from her ashes.”

At the time, New York City sat on the southern end of the island, and while a street grid had been established for Manhattan, the built city only stretched up to about 14th St. Villages and farms dotted the land to the north. But as the downtown recovered, avenues were extended, new homes went up, businesses and congregations seeking more space abandoned their old offices and sanctuaries and created larger ones further uptown.

With businesses expanding, workers in search of employment and immigrants seeking a new home flocked to town. Stores, restaurants and hotels opened, and pedestrians, newsboys, housewives, businessmen, clerks, merchants, and customers packed the streets. So much activity brought not only congestion but also hazards. In 1839 the New York Mirror listed some of the perils and nuisances on the streets, from “the villainous noise made by the milkmen” to “street-beggars by the thousand; hand organ and monkey, singing girls.”

New York grew at a tremendous pace, with the population more than tripling from 268,089 in 1835 to 813,669 in 1860. Change came faster and faster with the building of an aqueduct that brought a large supply of water to town—to quench the city’s thirst, fight fires and fuel industry—gas lighting, transportation, heating, cooking stoves, and ice boxes. In 1855, the census listed 31 shipbuilders in New York, Brooklyn and Williamsburg. The city also served as a major player in the cotton trade, with local businessmen receiving $0.40 for every dollar spent on southern cotton. Between 1840 and 1860 investment in manufacturing rose nearly 550%, and from 1855 to 1860 the value of industrial products went up 60%. Rev. Henry Ward Beecher, the brother of Uncle Tom’s Cabin author Harriet Beecher Stowe, wrote how he could see from his window in Brooklyn a “great city with a thousand shining eyes, couched down, but always watching, always murmuring, night and day, like some huge, muttering behemoth.”

By the eve of the Civil War homes lined the streets more than four miles north of where the Great Fire broke out. Back when the grid was planned, scant attention had been paid to the establishment of parks. But the phenomenal growth and increase in industry made town leaders realize they needed to restore what the Mirror called “the lungs of the city.” Thankfully in the mid-1850s more than one-square mile in the center of the island was set aside for Central Park, a spot that quickly became a vast and permanent place for New Yorkers to escape the frenetic pace of a community seemingly never at peace.

And more importantly, the changes that took place in those years set the stage for even bigger ones a half century later. Plans began for the settling of the still undeveloped part of northern Manhattan. The area was laid out, construction raced up the island, and officials started eyeing the surrounding area. Then on Jan. 1, 1898, Manhattan, the Bronx, Brooklyn, Queens, and Staten Island joined together to create Greater New York. Overnight what was a 65-square-mile city turned into a 304-square-mile metropolis, its population nearly doubling from 1.8 million to 3.35 million, making New York City at the time the second largest city in the world, after London.

“The end of the old New-York and the beginning of the greater city was marked last night by perhaps the biggest, nosiest and most hilarious New Year’s Eve celebration that Manhattan Island has ever known,” reported the New York Tribune. “The air was full of the din of hundreds of horns and thousands of shouts. The streets were full of a howling, pushing, shoving, hilarious multitude.”

Daniel S. Levy is the author of Manhattan Phoenix: The Great Fire of 1835 and the Emergence of Modern New York, now available from Oxford University Press 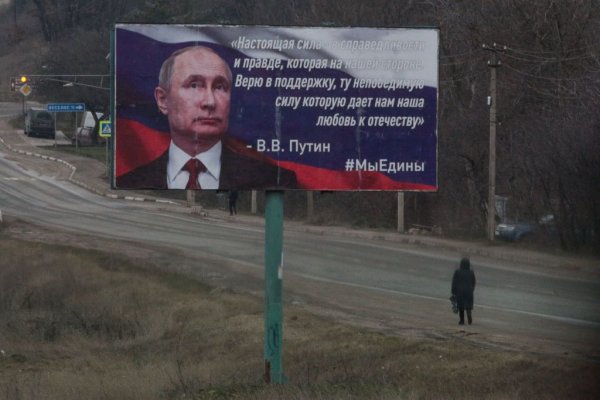 Historians on What Putin Gets Wrong About ‘Denazification’ in Ukraine
Next Up: Editor's Pick