As the Russian military has suffered unexpected setbacks in its war on Ukraine, the invading forces have increasingly hit civilian sites with airstrikes. On the sixth day of the Russian assault, at least five people were killed in the capital Kyiv when a television tower near the site of the Babi Yar Holocaust Memorial was targeted. At least 10 people were killed when a rocket exploded in front of an administrative building located in the central square of Kharkiv, Ukraine’s second-largest city. Hospitals, schools and apartment buildings have been destroyed by a bombardment that shows no sign of letting up.

Ukrainian President Volodymir Zelensky said the Kharkiv airstrike, which was captured on closed circuit television and shared widely on social media, qualified as “outright, undisguised terror.” In the footage, cars were stopped at a traffic light on their morning commute at around 8 a.m. local time when an incoming rocket exploded into a massive fireball that consumed several vehicles.

Nearly a week into Russian President Vladimir Putin’s unprovoked invasion of Ukraine, civilians living in the northern and eastern parts of the country are being hit with around-the-clock airstrikes, artillery shelling and unguided rockets. It remains unclear if Russia’s strikes on civilian targets are intended or incidental, but U.S. officials say that there’s been a noticeable shift in tactics in recent days as the attacks have pounded densely populated cities. A full accounting of the dead is currently impossible, but the United Nations human rights office says it has recorded at least 136 civilians killed, including 13 children, and 400 injuries over the last six days. “These are only the casualties we were able to cross-check, and the real toll is likely to be much higher,” said U.N. spokeswoman Liz Throssell.

Russia’s indiscriminate use of weapons that have killed non-combatant Ukrainians drew widespread condemnation. Amnesty International accused Russia of using cluster munitions in a deadly Feb. 25 attack on a pre-school in northeastern Ukraine while civilians huddled inside. Human Rights Watch reported a similar attack on an hospital in the country’s east just one day earlier. A growing international movement seeks to ban cluster munitions because they imprecisely spread bomblets, packed with shrapnel, which are later found unexploded in civilian areas, posing a long-term danger.

Oksana Markarova, Ukraine’s ambassador to the U.S., told reporters Monday after meeting with members of the U.S. Congress that Russia had used a thermobaric weapon, known as a “vacuum bomb,” that is particularly likely to cause civilian casualties when used in or near urban settings. The fuel-air explosive sucks up oxygen and creates a blast wave that is many times more destructive than conventional high explosives in enclosed spaces.

White House press secretary Jen Psaki said Monday the use of such a weapon on civilian targets “would potentially be a war crime.” The International Criminal Court said it intended to open an investigation into whether Russia has committed war crimes and crimes against humanity in Ukraine. It was too early, however, for U.S. intelligence to levy such an accusation. “We can’t say definitively that they are deliberately targeting civilian population areas or civilians,” said a senior defense official, who wasn’t authorized to speak publicly on the matter. “We can’t prove that. But they certainly are not as risk-averse when it comes to the impact they’re having on the civilian population.”

Agnès Callamard, Amnesty International’s secretary general, said the collection and preservation of evidence is crucial to any successful future investigations. “Above all, we must ensure that the tragically increasing number of victims of war crimes in Ukraine hear a message that the international community is already determined to secure redress for their suffering,” she said.

Amid the rising civilian casualties, there have been mounting calls for more aggressive western intervention in the fight. Some observers have argued the U.S. and its North Atlantic Treaty Organization (NATO) allies should establish a “no-fly zone,” in which American and allied fighter jets would regularly patrol over Ukraine and shoot down Russian military aircraft that breached it.

That notion was dismissed by the Pentagon because President Joe Biden has repeatedly insisted that the U.S. military would stay out of combat in Ukraine. “There’s no debating about it here,” the official said. “The President of the United States, the commander in chief, said we’re not going to be fighting in Ukraine and certainly if you were to enact a no-fly zone that puts you in the fight. It’s just not going to happen.”

The humanitarian cost of the war continues to grow in the region. Around 677,000 people have fled Ukraine, the United Nations High Commissioner for Refugees said Tuesday, an exodus that the U.N. estimates could grow to as many as 4 million. The U.N.’s refugee agency said most of those fleeing had headed to the 300-mile border with Poland, where U.S. forces are helping with preparations for new arrivals, while other displaced civilians left for Hungary, Moldova and Romania.

The refugees are running from the daily bloodshed as well as the violence that has yet to come. A 40-mile-long convoy of Russian tanks and vehicles is now just 20 miles north of Kyiv. The movement may signal Moscow’s plan to encircle the capital and cut it off from military defenses.

The Russian advance is going slower than anticipated, however, with Ukrainian forces showing stiff resistance. Despite fears that the Ukrainian military would crumble under the combat power that Russia continues to pour into the country, no major city has fallen to Moscow. The airspace over Ukraine remains contested. Although it’s still early in the invasion, U.S. intelligence assesses that morale is sagging among Russian military on the ground in Ukraine, the U.S. defense official said.

Some Russian troops have simply surrendered without fighting or resorted to damaging their own vehicles so they wouldn’t have to fight, the official said. Many military units consist of conscripts who were ill-prepared for grinding ground assault and, in some cases, weren’t given enough food, fuel or other equipment to carry out the mission. “A lot of these soldiers are conscripts who have never been in combat before,” the official said. “Some of them, we believe, weren’t even told they were going to be in combat.” The defense official declined to say how the U.S. came to these conclusions. 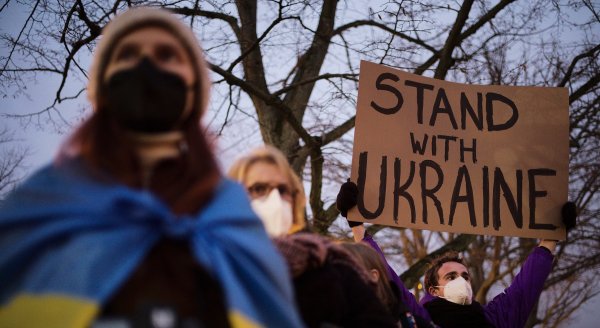 Europe’s Illusion of Peace Has Been Irrevocably Shattered
Next Up: Editor's Pick