Donald Trump Softened the GOP on Russia—At Least for Now

This article is part of the The DC Brief, TIME’s politics newsletter. Sign up here to get stories like this sent to your inbox.

For every presidential campaign’s press corps, there comes a point when the weary road warriors have the candidate’s go-to jokes, cadences and pet peeves down cold. Most joke that they’re playing a game of bingo among themselves, racing to complete their card first as the equally exhausted candidate rushes to hit as many swing states and donor dinners as is possible.

By the time Election Day 2008 arrived, John McCain’s traveling press corps had often heard a famous line that set the Arizona Republican apart from the deeply unpopular incumbent Republican President he was looking to follow. Then-President George W. Bush described his meeting with Russian President Vladimir Putin as looking into his counterpart’s eyes and seeing his soul. McCain liked to turn that premise on its head: “I looked into Mr. Putin’s eyes and I saw three things: a K, a G, and a B.” It always drew a chuckle from the crowds and a begrudging groan from those of us who were hearing it for the hundredth time.

For most of the post-World War II era, such a critical posture against the failed Soviet Union and its successor, Russia, was Republican doctrine. Dwight D. Eisenhower in 1950 described the former Allied powers in Moscow as “those people, behind and beyond the Iron Curtain, [who] have seen so much political wickedness and cold blooded betrayal, such Godless depravity in government.” Then-Vice President Richard Nixon faced off in a mocked-up American home against Nikita Khrushchev in 1959 in what has come to be called The Kitchen Debate. For Ronald Reagan, the Soviet Union was the unquestioned “evil empire.” When Mitt Romney was the Republican nominee for President in 2012, he had no pause: “Russia, this is, without question, our number one geopolitical foe.”

But then in the next election cycle, the Republican Party made a dramatic pivot. Rather than treat Putin’s Russia as a rival worthy of caution and distrust, many in the GOP followed the lead of the party’s biggest new voice​​, Donald Trump. The former reality-show host seemed not to understand Russia’s attempts to meddle in the 2016 election. Trump certainly didn’t recognize Putin’s looming threat to Eastern Europe, which is now manifesting into reality. Trump saw strength and ruthlessness in Putin, qualities the New York real estate mogul appreciated.

And from that repositioned ground, many Republicans in Congress are trying to navigate this week’s start to a Russian invasion of Ukraine. Gone are the days of McCain’s reliable zingers, replaced by a party whose members are embracing “America First” isolationism. The steady messaging coming from Fox News—especially its opinion hosts—is that Ukraine is of little U.S. interest and Russia might be justified in its invasion. (One such host even suggested the Biden Administration was hyping Ukraine to protect Hillary Clinton from a court filing that conservative media outlets have obsessed over.) The base seems to be responding favorably to the slide toward Russian apologia already in motion for the last six years.

It’s an early test of where lawmakers and those who hope to become them in the Republican Party need to be. In Ohio, for instance, Senate candidate J.D. Vance essentially blew it off: “I don’t really care what happens to Ukraine one way or another.”

It might be the politically smart stance, at least in the current GOP still taking its cues from Trump. Republican voters tell pollsters they’re less eager than Democrats to dispatch forces to fight Russia—a 15-point difference in YouGov’s latest polling. While Republicans for years had been seen as the pro-military, hawkish half of the country, two decades of wars in Afghanistan and elsewhere have left the base weary. Trump understood that before the rest of the party did.

Specifically on Russia, Trump’s rhetoric has helped usher a seismic shift. According to Gallup, Republicans for years tended to have a more skeptical view of Russia than Democrats. But as Russia’s interference came to Trump’s benefit in the 2016 election, the script flipped, with just one-in-three Republicans now seeing Russia as a threat in the Gallup numbers.

Hence, Trump’s assessment of Putin’s latest moves towards Ukraine as “genius” and “savvy” this week sent the foreign policy establishment into Did He Say That? mode, but didn’t wreck his chances in another potential presidential run. Trump’s respect for Putin isn’t outside the mainstream any longer. YouGov polling from January finds 62% of Republicans and independents who lean that way find Putin a stronger leader than Joe Biden.

If polling holds, Trump is positioned as the GOP’s favored candidate to win the presidential nomination in 2024. And if he doesn’t, plenty of his heirs are ready to adopt his stance: former Secretary of State Mike Pompeo, who has his own presidential ambitions, has praised Putin in some interviews, calling him at turns “a credible, capable statesman” in one interview and proclaiming “enormous respect” for the former KGB agent.

Not all Republicans have been subsumed by Trumpism. Some, like Sen. Lindsey Graham, remember traveling the globe at McCain’s side provoking Moscow. Graham is now pushing for “a sanctions regime from hell” against Putin—a package that lawmakers last week couldn’t pass.

This is an election year and every utterance and vote is fodder, especially for Republicans facing primary opponents. That’s why even in criticizing Putin, the House Republicans’ Leadership team accused Biden of adopting a policy of “appeasement” and cast the true perpetrator as the team in the White House and not the Kremlin. Others point out that the invasion of eastern Ukraine and Crimea by Russia occurred under President Barack Obama and then-Vice President Biden in 2014. Not all Republicans have adopted Trump’s zeal for Kremlin-led autocracy, but they also know they can ill-afford a cranky Trump as they try to take back control of the House.

For years, it went on faith that Republicans would be tough on Russia and Democrats would treat it as an overblown relic, as Obama himself did during one 2012 debate with Romney. The footing on Russia has shifted among Republicans, though. The quake may be temporary or it may harden, but there’s no denying that the GOP has had its core shaken since 2016 in still untold ways. For Republicans chasing power, it would be tempting to trade-in McCainism for Trumpism, especially if the party’s base would rather see MAGA hats than KGB spooks. That doesn’t make Putin any less of a threat to the United States’ strategic alliance with the West. But even the most hardened lines against Moscow can get whittled down over the years, especially if someone like Trump is given a drum sander. 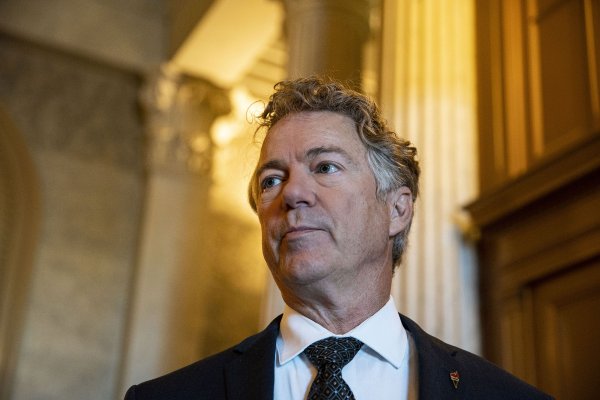 Rand Paul Almost Killed a Senate Rebuke of Russia. Here’s Why That Matters
Next Up: Editor's Pick