In January, Chinese President Xi Jinping sent a note to Ukrainian President Volodymyr Zelenskyy to celebrate three decades of diplomatic ties. Ukraine is, after all, a key member of Xi’s signature Belt and Road Initiative—a $1 trillion repaving of the fabled Silk Road—with whom China enjoyed over $15 billion of bilateral trade in 2020. “I attach great importance to the development of the China-Ukraine strategic partnership,” Xi said, hailing a “deepening political mutual trust, fruitful cooperation in various fields and even closer people-to-people and cultural exchanges.”

It must have come as something of a shock, then, when Xi learned that Ukraine, according to the claims of Russian President Vladimir Putin on Monday, “never had a tradition of genuine statehood.”

China’s most powerful leader since Mao Zedong isn’t used to being contradicted. But as Russia ordered troops into Ukraine’s restive eastern Donetsk and Luhansk regions on Monday, China’s stance regarding Putin’s revisionary aggression remains curiously incoherent and ambivalent: On one level in support of the rules-based international order; on the other tacitly backing Putin’s strongman realpolitik.

Read More: Putin’s Moves Toward War in Ukraine Show How Dangerous He Has Become

Following a summit at the opening of the Winter Olympics in Beijing, Xi and Putin issued a joint statement on Feb. 4, criticizing the “negative” U.S. influence both in Europe and across the Asia-Pacific. They also said they would be deepening a “no limits” strategic partnership, while opposing “the further expansion of NATO” in what they deemed a “Cold War era” approach.

Professor Steve Tsang, director of SOAS China Institute at the University of London, argues that it was as “strong can you get in terms of support short of forming a formal alliance.” Chinese state media, meanwhile, gushed that the two nations stood “shoulder to shoulder in upholding justice in the world.”

At an emergency U.N. Security Council meeting on Monday, Zhang Jun, China’s ambassador to the U.N., called for restraint by “all sides.” While officially calling for “calm, restraint and dialogue” on Tuesday to resolve the Ukraine crisis, Beijing’s repeated repudiation of the West, like that in Beijing Feb. 4, is effectively cheerleading Putin’s belligerence.

Meanwhile its purchase of Russian oil—bilateral trade rose 33.6% year-on-year to some $140 billion in 2021—is likely to dampen the impact of Western sanctions. Following the 2014 invasion of Crimea, several Chinese state banks provided loans for Russian counterparts sanctioned by the West.

Still, it remains a muddled, contradictory relationship. On Feb. 19, Chinese Foreign Minister Wang Yi called the Minsk accords, two faltering ceasefire agreements that nevertheless remain the bedrock for any negotiated settlement on the independence of Donetsk and Luhansk, “the only way out for the Ukrainian issue.” But then Putin effectively shredded that agreement two days later when he recognized the independence of the two regions in his speech on Monday.

Beijing is not generally in the habit of endorsing territorial revisionism (other than on its own periphery to its own benefit). It has not recognized Putin’s 2014 annexation of Crimea, for one. But there are signs of a shift in thinking. Last month, China was the only country on the 15-member U.N. Security Council to vote with Russia in a failed attempt to stop a U.S.-requested meeting regarding Moscow’s troop build-up at its border with Ukraine.

Read More: The Threat of a Russian Invasion Is Crushing Ukraine’s Economy and Culture

What is clear is that China, as the ultimate geopolitical pragmatist, doesn’t really care what happens to Ukraine’s 44 million people as long as its own interests are protected. A quick assault and pro-Kremlin regime installed in Kyiv isn’t, ultimately, a bad outcome for Beijing. “But were Ukraine to descend into chaos, Chinese interests are not being looked after,” says Tsang. (China is the biggest trading partner of Ukraine, which sells Beijing strategically important military hardware including parts for advanced weapons systems.)

So, what does Xi get out of chaos? A distracted U.S. may be a net positive given the tenor and trajectory of recent Sino-U.S. relations. “If there is a major war in Europe … it still will steal a lot of oxygen in any war room,” says Alexander Gabuev, chair of the Russia in the Asia-Pacific Program at the Carnegie Moscow Center. “And that means that there will be diversion from the China challenge.”

But the irony is, of course, that by tacitly backing Putin, Xi has all but confirmed Western hawks’ greatest fears about an authoritarian arc stretching from St. Petersburg to Shanghai, harking back to the Sino-Soviet alliance of the 1950s. Stronger Beijing-Moscow ties, after all, simply provide democratic rivals a rallying point. As NATO’s secretary-general Jens Stoltenberg told reporters Feb. 15, “Fundamentally what we see is that two authoritarian powers, Russia and China, are operating together.” Moreover, while Xi galvanizes the world’s split into two opposing blocs—the U.S. and Europe; Russia and China—it can’t be lost on him that he’s thrown his hat in with the weakest of the lot.

Foremost in Xi’s mind might be what the Ukraine crisis means for his desire to recapture Taiwan, the self-ruling island that broke from the mainland following China’s 1945-49 civil war, and whose unification he has repeatedly called “the great trend of history.”

And military parallels aren’t terribly helpful. Ukraine is neither an ally nor strategically important to the U.S., whereas Washington is obliged by treaty to sell Taiwan the weapons it needs for its own defense and the island is a geostrategic lynchpin, producing much of the tech that makes the modern world run. Ukraine would be a messy, attritional ground war; Taiwan would be fought by navies and missiles.

The unknown question for Xi is what kind of economic retaliation he could expect for any offensive on Taiwan, and it’s in this respect that Ukraine might offer an example. At $1.7 trillion, Russia’s economy is less than one-tenth the size of China’s. If Western nations can’t handle the hardship of meaningful punitive economic measures on the Kremlin, then how would they stomach sidelining the world’s top exporter and trading nation? “The Chinese have reasonable grounds to believe that, if and when they are ready to take Taiwan, they will get a similar response [to that Russia receives for Ukraine],” Tsang says.

On Tuesday, the first sign of that Western response began to take shape. The U.K. announced sanctions on three Russian individuals and five banks, while German Chancellor Olaf Scholz halted the certification process for the $10.6 billion Nord Stream 2 pipeline, through which Moscow was due to sell up to 55 billion cubic meters of natural gas annually. The U.S. is due to announce its own new sanctions package on Tuesday.

Read More: What the West Will Never Understand About Putin’s Ukraine Obsession

While this might be chastening regarding Xi’s ambitions for Taiwan, it might not be bad news in the short term at least. After all, a glut of Russian gas means resource-ravenous Beijing is better placed to cut a deal. “After 2014, Russia found itself closer to China and more dependent on China,” Gabuev says. “Here, a very similar moment is coming.”

There may be additional costs, of course, in terms of China’s international credibility. World leaders are unlikely to put much faith in Xi’s celebratory notes, for one. While Putin may relish the role of world’s pantomime villain, Xi still clings to the notion that a resurgent China is a force for good. But by hedging his bets on Ukraine, he risks showing the world his true colors. 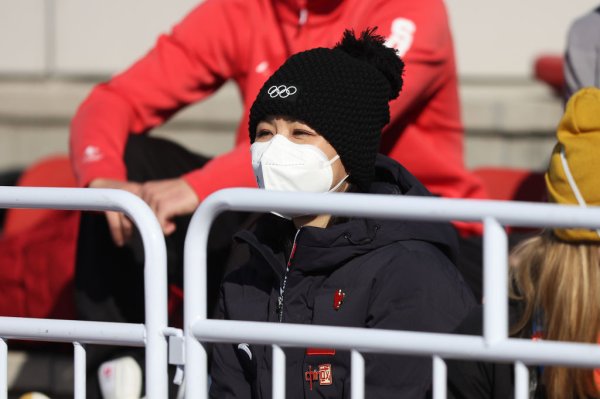