Ideas
By Catherine Grace Katz
Katz is the author of The Daughters of Yalta: The Churchills, Roosevelts, and Harrimans: A Story of Love and War (Houghton Mifflin Harcourt, 2020) and a student at Harvard Law School

In 2014, six weeks after Russia invaded the Crimea, Google Maps took a major step, one that the United States, United Nations, and international community still refuse to take: it recognized the Crimea as Russian territory—but only on some versions of the product. While users in Ukraine still the saw the version of Google Maps everyone was used to seeing—no demarcated border between the Crimea and Russia, but a light gray line indicating an internal border within Ukraine—on the Russian version of Google Maps a solid line suddenly appeared between Ukraine and the Crimea. To users in Russia, this line reflected what the Russian state asserted with its armed invasion. The Crimea unequivocally belonged to Russia. Meanwhile, users of the standard .com version of Google Maps saw a third reality: a dashed line between the Crimea and Ukraine indicating that the border was now disputed.

With the prospect of a major European war greater now than at any point in recent memory, Google needs to be every bit as—if not more—aware of its response to the potential impacts of a Russian invasion of Ukraine as any sovereign nation. As one of the most powerful companies in the world, Google Maps is often treated as the ultimate authority in mapping. Google has the potential to legitimize the illegal actions of hostile nations.

From the British East India Company in the 18th-century to airlines and energy companies of the present, private corporations have long found themselves mired in international conflicts. However, while the British East India Company essentially functioned as an extension of Crown authority in India, prompting Edmund Burke to describe the British government as “a state in the guise of a merchant,” today the reverse might be said of supranational technology companies.

No longer is the relationship of corporations to states as Thomas Hobbes famously described in Leviathan, as “lesser commonwealths in the bowels of a greater, like worms in the entrails of a natural man.” Today, supranational technology and social media companies increasingly take on government-like functions of their own accord and wade into activities we typically associate with the domain of sovereign states. Tech companies’ executive ranks are filled with former high-powered government officials, Supreme Court-like oversight boards impose First Amendment obligations on these private entities, they send “ambassadors” to build relationships with foreign governments. And, of course, Google dominates the field of cartography, which, from the 17th to the mid-20th Century, was often a direct extension of sovereign power.

Google Maps is nearly ubiquitous with 80% market share in digital mapping. With such immense market power, many users think Google provides them with the map of the world. This is partly due to Google’s role in our lives as a purveyor of fact, combined with the sense that digital mapping is scientific, objective, and unbiased, as well as the reality that many governments have outsourced data management functions to private companies. However, the product has no imprimatur of authority. Google Maps reflects the views of one private company that has a duty to maximize shareholder value. As a result, the way Google draws borders or names places on its map is often at odds with those recognized by the international community or United Nations.

Neither the UN nor any other state save for Turkey recognizes the Turkish Republic of Northern Cyprus, and yet, users in Turkey see it demarcated on their Google Maps. Western Sahara, disputed between Morocco and the Saharawi people’s Polisario Front, is listed among the UN’s non-self-governing territories. For most global users, Google Maps separates Western Sahara from Morocco with a dashed line and uses the same font as sovereign countries in its label, but in Morocco, Western Sahara disappears. And in India, Google Maps displays the long-charged Kashmir and Arunachal Pradesh regions differently than for users elsewhere.

As seen in the case of the Crimea, international law is reluctant to recognize changes to borders because of fundamental principles of territorial inviolability, a central tenant of the post-war international legal order under the United Nations system. Meanwhile, Google can make millions of edits to its maps daily. With a new line of code, the map can change in an instant—as can the very base map users are viewing from within their respective countries. Google makes no secret of the fact that it provides localized versions of maps in certain countries around the world where failure to comply would mean the company could not operate within those countries, but it is not a point the company advertises.

Users have only a vague sense of how Google chooses to represent disputed borders or place names on its maps, or what specific criteria it uses when it decides to begin showing a border as disputed. In 2009, Google’s then director of public policy, Bob Boorstein, wrote a public blog post explaining that the company seeks to display “ground truth” on its maps—which Google does not actually define—when dealing with border disputes or disputes over toponyms (what a place is called). Similarly ambiguous are what sources Google uses to draw its maps. The company does publish a list of sources in its legal notices, including UN and US government data, but it does not say what any one data set is used to depict. Following the 2014 change to the way Google displayed the Crimea, a company spokesperson stated that Google Maps attempts to display the world “objectively” by following “local regulations for naming and border disputes.” However, merely reflecting what local laws say is not quite the same as not taking sides.

Google’s ill-defined border and toponym dispute resolution process has embroiled the company in some of the most heated clashes on the map. Over the course of the company’s short history and meteoric rise to power, Google has become both an instigator and mediator of first instance in deeply historic disputes between sovereign nations.

The most famous example is the 2010 “Google Maps War” between Nicaragua and Costa Rica, when Nicaraguan troops dredging the Río San Juan used an error in Google Maps’ border between the two nations to justify an incursion into Costa Rican territory that Nicaragua had long tried to claim. Costa Rica responded by sending a unit of police officers to the border (in the absence of a standing military). Alongside this show of force, both sides appealed first to Google, rather than an international legal body, to support their now weaponized border claims.

More consequentially, Google’s naming practices have inflamed major sources of geopolitical tension in the Middle East. Since the 1960s, international parties have debated whether the Persian Gulf should instead be called the Arabian Gulf, a name that gathered support in the wake of rising Arab nationalism in the early 2010s. The United Nations had addressed this toponym dispute directly in 2006 and published a detailed study of the “Historical, Geographical, and Legal Validity of the Name: Persian Gulf,” reaffirming “Persian Gulf” as its internationally recognized name dating back to the time of ancient Greece. However, Google began showing both names on its Google Earth product following another loosely defined policy of “Primary Local Usage” for bodies of water. Outcry erupted in Iran, which threatened to ban from Iranian airspace any airlines using Google’s products on in-flight maps. Still today, Google has not entirely complied with the views supported by the UN and international community. If you search for “Persian Gulf” on Google Maps, the search bar still informs you it is also called “Arabian Gulf.”

Over the last decade, Google’s influence over international affairs has quietly but powerfully increased. Perhaps the most concerning recent example of Google Maps’ influence in international relations was its part in the aftermath of the November 2020 Russian-brokered ceasefire between Armenia and Azerbaijan, which received little attention. In the absence of internal cartographic expertise and high-quality modern maps (the best maps were Soviet-era maps of dubious quality that were often falsified), Azerbaijani officials began using Google Maps in the long-disputed Nagorno-Karabakh region to apply the new border created by the ceasefire, displacing families in small villages in the process. Alongside the private company’s tools being used to draw a new international border, Google Maps users noticed the company began updating its maps—presumably in pursuit of its “ground truth” policy but without explicit explanation—in favor of Azerbaijan before the ceasefire even went into effect, despite the fact the borders had not yet legally changed.

While each of these instances may not be cause for alarm individually, collectively, Google Maps’ impact on international affairs is massive, especially as it affects users’ perceptions about major geopolitical disputes, as users tend to conflate Google’s ubiquity with authority.

As tensions rise with Russian troops amassed on Ukraine’s border, the decisions of America’s most powerful companies that affect geopolitical affairs are too important to be resolved in a seemingly ad hoc and ex post manner as with the Crimea in 2014. A Russian invasion of eastern Ukraine would offer Google Maps its greatest challenge yet—one that would pit Google’s commitment to its policy of depicting “ground truth” with concerns over the symbolic victory for Putin that recognition by such a powerful American company would represent.

In recognizing its power on the world stage, Google must have a more concrete and transparent plan for how it treats disputed borders on its ubiquitous product. The real truth on the ground is that the consequences of Google’s choices regarding representations of deeply entrenched international disputes cut to the core of centuries-old notions of sovereign identity. 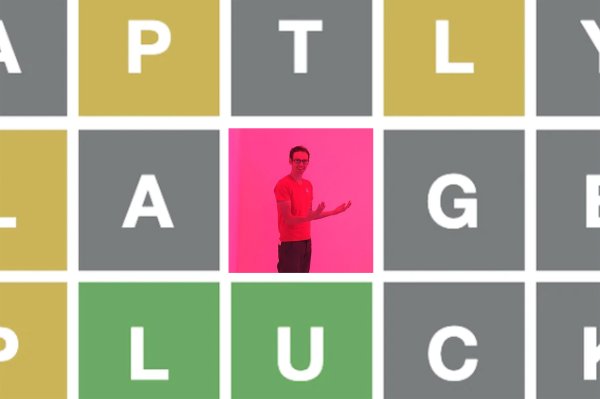 How Wordle's Creator Feels About Selling His Viral Game
Next Up: Editor's Pick