As a child, Quinta Brunson loved being able to gather around the TV with her family for the shows they all enjoyed, from 227 to Martin to The Fresh Prince of Bel-Air. Now, the writer and executive producer of Abbott Elementary is hoping the new sitcom will become that kind of show for families today.

Brunson stars in the mockumentary-style show as Janine Teagues, an idealistic second-grade teacher eager to solve the many problems plaguing her underfunded Philadelphia public school, from outdated textbooks to broken hallway lights. It premiered at a time when the pandemic has made teachers’ jobs more challenging than ever and has drawn more attention to the important role of public schools within a community.

Brunson, a comedian who previously produced and starred in videos for BuzzFeed and co-starred on HBO’s A Black Lady Sketch Show, says she has heard “an overwhelming response” from real teachers who see themselves in the show’s characters. She named the show after her middle-school teacher, Ms. Abbott, and also drew inspiration from her mother, who taught kindergarten in Philadelphia public schools for about 40 years before retiring.

Brunson talked to TIME about transitioning to network TV and finding a way to address big issues in education while making sure her show remains a comedy.

Why did you want to set this workplace sitcom in a school environment?

I’m a big fan of workplace sitcoms, and I got inspired from spending some time with my mom before she retired. For about 40 years, she had taught and I’d been with her so much. I was in her kindergarten class when I was little. I went to the school she taught at. I rode to school with her; I rode home with her. That environment felt very natural to me, and I felt that I could tell some really strong stories there.

How did your mom shape your understanding of what it’s like to be a teacher today?

The hours my mom put in were crazy, and the impact she had on children’s lives alone meant it was a huge job. And they do it for not only one student, but 20 to 30 students at a time. People don’t get how difficult that is.

What has your mom thought of the show?

She loves it. She called me about this past episode. There’s a scene where the teacher Barbara Howard, who’s kind of inspired by my mom, has no idea who a student is who is praising her. He’s a grown man because she’s been teaching for years. That was ripped right from my mother’s life. She was like, “I’m gonna start needing a royalty check.”

Your middle-school teacher Ms. Abbott inspired the name of the show. Have you spoken with her since it premiered?

I ended up calling her. She was overjoyed, just so happy to hear from me. I’m like, “You know, you inspired the name?” She burst out in tears. It turns out she’s retiring this year, after so many years of phenomenal teaching, so she said this was a wonderful retirement gift.

What have you heard from real public school teachers in response to the show?

I have heard an overwhelming response from teachers. I’ve had teachers who have messaged me online, friends who are teachers who are really enjoying it. A friend of mine actually messaged me and said, “Look, I hope this show makes people become teachers, because a lot of us are leaving.” Ultimately, they’re hoping it creates some type of change.

The show touches on big problems in education—underfunded public schools, high teacher turnover. How did you find a balance between addressing tough issues, but keeping the show funny?

We didn’t try to make anything funny that couldn’t be made funny. There are some things that can be background jokes. In an episode about new technology, we very quickly talked about the school-to-prison pipeline. It’s a huge issue, but that probably can’t be a full-episode concept because that would change the nature of our show. We want to make sure it stays a comedy. There are always ways to insert these larger issues into the picture to get people thinking and talking about what’s going on in schools.

Some of the plotlines on the show are tied to pandemic-related challenges, whether that’s crowdfunding for school supplies or adjusting to a virtual learning technology. Did you consider whether the pandemic should be part of the show?

When we developed it, in 2018, COVID wasn’t even a factor. Also, personally, I was watching TV shows try to handle COVID, and some shows did it really well. Some shows really felt flat on their faces because it’s just hard, between the masks of it all. I didn’t want to even try to do that, at least not on this first season. I thought we had a show without it, and I thought it was a stronger play to show what teachers are dealing with outside of COVID.

Your character, Janine, has a great dynamic with Sheryl Lee Ralph’s character, Barbara, a veteran teacher who is kind of a mentor. Is there someone in your career who has been that person for you?

If I had to say there was one who’s most like Barbara in my life, it’d be Larry Wilmore. I feel like Larry Wilmore is my unofficial mentor. I worked on a show with him, and the dynamic was very like Janine and Barbara: “Quinta, do the job. Do the writing. Write the good work.” Very honest with me and very stern. I don’t know if Larry thinks I’m his mentee, but he is my mentor.

What has it been like expanding into network comedy after your work on BuzzFeed and A Black Lady Sketch Show?

BuzzFeed is a platform about reaching everyone, and I enjoyed that. It’s part of why I joined network TV, because you can reach everyone with it. When I was a kid, network television was the way everyone in my house got to watch together. I loved being able to watch TV with my family, so I wanted to do that for people. I wanted to create a sitcom that had a strong point of view, from the millennial me, but could also span generations. 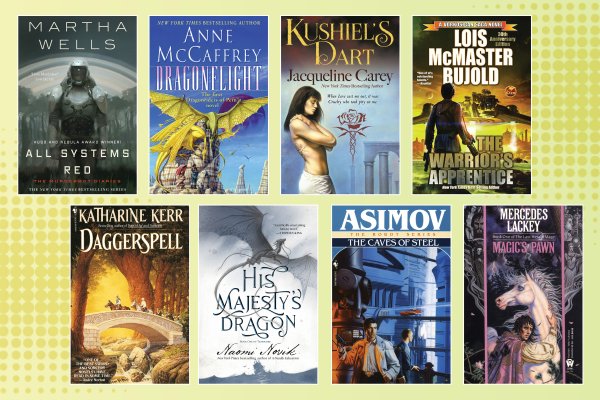 8 Science Fiction and Fantasy Books That Deserve a Screen Adaptation
Next Up: Editor's Pick