The White House intern whose affair with President Bill Clinton nearly got him kicked out of office has made a point of of declining interviews as she builds a new life. Here’s a look back at what she has done since the scandal died down after Clinton was acquitted of impeachment charges in February 1999.

Lewinsky’s authorized biography, “Monica’s Story,” traces her White House antics back to emotional scars from adolescence, including a struggle with an eating disorder and a tumultuous series of love affairs. New York Times book critic Michiko Kakutani wrote that the events in the book, “sadly sum up the sorry state of affairs our culture has reached, a state in which news and voyeurism, politics and soap opera have inextricably blurred.” The book shot to the top of the New York Times’ best seller list.

Lewinsky famously said that she coped with the publicity by knitting regularly. She turned the hobby into a full-fledged business in 1999 when she began to sell knitted handbags through her now defunct website, TheREALMonicainc.com, (Monicainc.com was already taken). According to New York Magazine, Lewinsky selected the fabric, sketched designs, and frequently visited the factory floor in Louisiana. She also wrote copy for the website. “Glistening like a midnight comet,” she wrote of her Midnight Storm Camoufler Purse, “this blackout is a welcome one, unlike your hard drive crashing prior to deadline or at twelve a.m.” The website went into hibernation in 2004. Lewinsky posted a message on the website that said the handbag work had, “helped me cope during an almost unendurable time in my life.”

A slimmed-down Lewinsky appears in a commercial for Jenny Craig. “I’ve tried every diet in the world,” she says, before telling viewers that she had lost 31 pounds with the help of the dieting service. The commercial set off a firestorm of criticism as franchise owners refused to accept Lewinsky as their spokesperson and opted to run old commercials instead. After a five-week run, the company pulled the ads from television and cut short the $1 million dollar endorsement deal.


Monica Lewinsky, dressed in a black pantsuit and a white blouse, sits in front of a black curtain under a white spotlight, for the HBO documentary, “Monica in Black and White,” filmed in, you guessed it, black and white. The deadly serious color scheme didn’t convince the critics that this show would offer deeper insights into Lewinsky’s ordeal. “Tonight on HBO,” wrote one reviewer for the New York Times, “it’s Monica the Infomercial.”

Lewinsky, flanked by twenty masked men, advises a young, single woman to select a husband based on his personality, not his looks, in the aptly named reality series, “Mr. Personality.” 12 million viewers tuned in for the premiere. A considerable proportion came from the crucial 18 to 49 year old demographic, but the show’s popularity was short-lived. Fox cancelled the series after five episodes.

Lewinsky graduates with a master’s degree in social psychology at the London School of Economics. The audience erupted in “spontaneous applause” when she went to accept her diploma, according to her friend and publicist.

Lewinsky declined many interviews from the press, including TIME in 2009. Her friend and former publicist, Barbara Hutson, explained that Lewinsky was attempting, as best as possible, to avoid any publicity. The New York Post reported last fall, however, that Monica Lewinsky was rumored to be shopping around a $12 million dollar book deal — which promised to reveal a more salacious, detailed account of her illicit encounters with the president. The rumors alone have sparked a flurry of speculation about the resurrection of the scandal. “Monica Lewinsky is Back” read a September 2012 headline in the New York Observer, echoing 15 years of headlines on the evergreen intern. 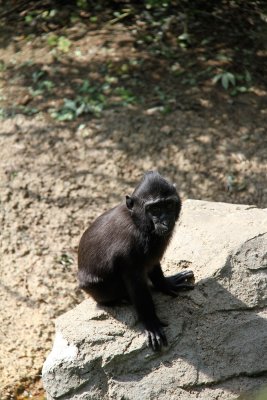 See The Top 12 Zoo Escapes
Next Up: Editor's Pick