The James Webb Space Telescope traveled nearly 1.6 million km (1 million mi.) to reach a destination that, in some ways, is nowhere at all. On Jan. 24, just shy of one month after its Christmas Day launch, the $10 billion observatory arrived at a spot in space known as L2—where the gravity of the sun and the Earth effectively cancel each other out, allowing the spacecraft to circle an invisible point as if it were orbiting a solid body like a planet. There the telescope will station-keep for up to the next 20 years, peering deeper into space than any observatory ever has before. The one-month flight was the culmination of 25 years of research and development work, and NASA was not shy about celebrating the accomplishment.

“Webb, welcome home,” cheered NASA administrator Bill Nelson in an agency blog post. “Congratulations to the team for all of their hard work ensuring Webb’s safe arrival at L2 today. We’re one step closer to uncovering the mysteries of the universe.”

“Congrats to the team,” tweeted Thomas Zurbuchen, NASA associate administrator. “@NASAWebb is now in its new stable home in space & one step closer to helping us #UnfoldTheUniverse.”

The arrival at the L2 point was indeed a cause for space agency high-fives. The Webb telescope operates in the infrared spectrum, detecting exceedingly faint heat signatures from stars and galaxies that formed up to 13.7 billion years ago—or just 100 million years after the Big Bang. In order to pick up such vanishingly tiny electromagnetic signals, the telescope’s 18-segment mirror has to be kept exceedingly cold—as low as -234º C (-390º F). Orbiting in the L2 spot makes that possible, allowing the telescope’s tennis-court-size sun shield to protect it not only from the sun itself, but from reflected light from the Earth and the moon. With its back to those heat sources and its mirror facing out to space, the telescope will, as Zurbuchen also tweeted, “allow a wide view of the cosmos at any given moment.”

Entering the L2 orbit was a delicate exercise. The spacecraft had to fire its main engine for exactly 297 seconds—just shy of five minutes—slowing its speed by a mere 5.8 km/h (3.6 mph), and easing it into an orbit that will see it complete one circuit around the L2 point every six months or so. Those orbits will not be entirely stable, however, with some drift inevitably creeping into them as a result of the position of the spacecraft relative to the Earth and the sun. For that reason, Webb will periodically have to fire its on-board thrusters to make minor course corrections—and that fact was a cause of concern.

The telescope was launched with a full tank of maneuvering fuel, enough for it to operate for at least 10 years—not bad, but not nearly as long as the 32 years and counting that the Hubble Space Telescope has been in service in a stable low-Earth orbit, where it needs no such fuel. Engineers equipped the Webb with grappling handles and a refill port, allowing for the possibility of an uncrewed spacecraft to fly out and top off the tank with more fuel as needed. That was a good idea, but one with a slight hitch: such a spacecraft does not yet exist, and NASA would have only a decade to fund, design and build it. Happily, the European Space Agency Ariane 5 rocket that launched the Webb placed it on a trajectory so true that the telescope had to use virtually none of its precious fuel on outward-bound course corrections, extending its operational life to what engineers now predict could be 20 years or more.

Webb can use every bit of time it can get, especially because, even now, it is still months away from actually beginning its work of exploring deep space. The telescope’s 6.5 m (21.3 ft.) mirror is made of 18 hexagonal segments, each of which moves in seven angles operated by seven pistons and actuators, allowing the overall mirror to be brought into sharp focus. Getting those mirrors into position is a painstakingly precise exercise.

“We start with the mirrors off by millimeters and we’re driving them to be aligned to within less than the size of a coronavirus, to tens of nanometers,” said Jane Rigby, a Webb project scientist, at a press conference at NASA’s Goddard Space Flight Center in Greenbelt, Md.

Gregory Robinson, the Webb program director, counsels patience from a public anxious to see the telescope’s first images, predicting that it will not be until early summer before the mirror segments will be fully aligned and ready to go to work. But the wait, he also predicts, will be worth it.

“I certainly believe that we are going to see some things that we could never even imagine,” he says. “So whatever those things are, certainly, my jaw will drop.” 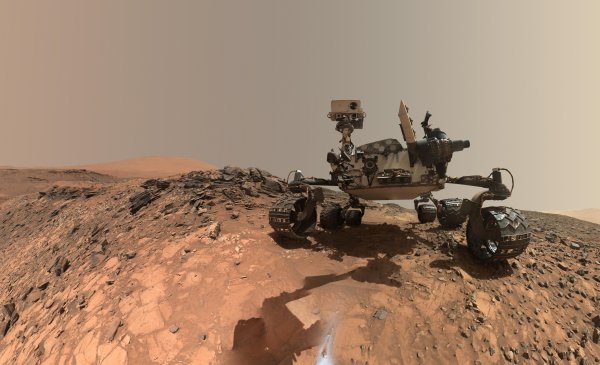 Is There Life on Mars? A New Study Offers Tantalizing Clues
Next Up: Editor's Pick