Former Secretary of Health and Human Services Kathleen Sebelius called the rollout of the government’s healthcare reform law “terribly flawed” and said the administration’s original predictions about its timetable were “flat-out wrong” in a Sunday interview on NBC’s Meet the Press following her resignation last week.

Sebelius attempted to stay positive while acknowledging the failures of the rollout. “Could we have used more time and testing? You bet. I’ve said that from the start,” she told NBC‘s Andrea Mitchell. “But the site actually works. And the great thing is, there’s a market behind the site that works even better. People have competitive choices and real information for the first time ever in this insurance market.”

The rollout of the Affordable Care Act was flawed from its Oct. 1, 2013 launch date, mostly because of technical glitches and web outages affecting the federal Healthcare.gov site. Republicans cite the flawed launch as further evidence that the Affordable Care Act represents unacceptable government overreach. But despite the poor rollout, the number of enrollees in healthcare plans under the law ended up exceeding the Obama administration’s target of 7 million people.

Sebelius also partially attributed the technical failures to the fact that the administration didn’t know until 6 months before enrollment which states would be building their own sites and which would be using the federal site, calling the web development “a moving target.”

The former Secretary also said she didn’t think the White House oversold the program, but instead said that the problem of reforming health insurance was so thorny it defied easy solutions. “I think what we said from the outset was, you know, this was fixing a very broken market– where individuals really were on their own,” she said. “If you were healthy and wealthy, you could get coverage. If you weren’t, you were pretty much on your own”

When asked whether her resignation was voluntary or whether she had been ousted, Sebelius said she had been planning to leave at the end of the first term but didn’t want to jump ship before the health care rollout was complete. 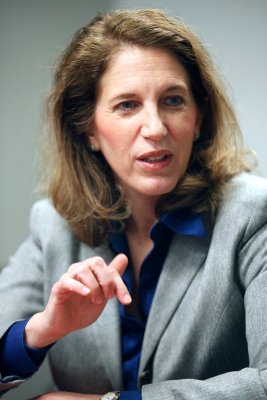 Meet The Woman Who Would Replace Kathleen Sebelius
Next Up: Editor's Pick