U.S. President Joe Biden speaks after exiting a meeting with the Senate Democratic Caucus in Washington, D.C., U.S., on Thursday, Jan. 13, 2022. Biden said he still hopes to win passage of voting rights legislation, which is headed to almost certain defeat, and that he'll continue trying if lawmakers vote it down.
Eric Lee—Bloomberg/Getty Images
By Abby Vesoulis and Brian Bennett

Joe Biden spent more than three decades in the Senate. He understands its arcane rules. He once showed a prowess for shepherding complex legislation past obstinate Senators from both parties. But as he closes out his first year as President, Biden has failed to get two of his signature legislation efforts past Senators of his own party.

His trillion-plus dollar social spending and climate bill has been held up over objections to its price tag, corporate tax provisions and impact on polluting industries. And he has so far failed to sway Democrats to change Senate rules to pass laws designed to ensure the integrity of vote counting and access to polls. In the process, he’s alienated two key Democratic Senators: Joe Manchin of West Virginia and Kyrsten Sinema of Arizona.

After months of bad days for Biden, Thursday got off to a uniquely rough start. An hour before the President was scheduled to make his pitch to Democratic Senators to eliminate the filibuster to ram through voting protections, Sinema stood on the Senate floor and torpedoed the plan, referencing her “long-standing support for the 60-vote threshold to pass legislation.” White House aides had been caught flat-footed that morning when they got word Sinema was going to tank the effort.

Biden had no real prospects after that. But he got in the black Presidential limo from the White House for the three-minute drive down Pennsylvania Avenue to Capitol Hill, anyway. When the President stepped into the Russell Senate Office Building, a reporter shouted: “Mr. President, how do you get this done?”

Biden turned and walked into the caucus meeting, ducking the most important question on the Hill on Thursday—and the question that may ultimately define his first term as President, as an increasing number of his key initiatives become stalled and Americans sour on his leadership. The pandemic he declared almost over in July is seeing yet another spike in cases. Millions of Americans still refuse to be vaccinated. Consumer goods prices continue to rise. A humanitarian crisis has followed in the wake of his decision to withdraw U.S. troops from Afghanistan and the Taliban takeover of the country. While he did sign pandemic relief and a bipartisan infrastructure law last year, he wasn’t able to pass his social spending package, and he’s faltering on the voting rights bills. The percentage of Americans who approve of his job as president has dipped into the low 40s.

Thursday’s gathering lasted a little over an hour. Biden spoke for roughly 15 minutes, followed by more than 45 minutes worth of questions from Senators about the importance of passing the John Lewis Voting Rights Advancement Act and the Freedom to Vote Act, Virginia Democrat Sen. Tim Kaine told reporters afterwards.

The former of the two bills would restore the federal government’s power to prevent states with histories of racial voter discrimination from enacting new election policies without pre-clearance from a federal judge or the Department of Justice. The latter of the two bills would expand voting access by making Election Day a holiday, require early voting periods of at least 15 days, make it more difficult for states to remove eligible voters from voter rolls, prohibit overtly partisan gerrymandering, and mandate that states allow voters to cast ballots by mail without an excuse, among other things.

Much of Thursday’s meeting revolved around whether it was wise for Democrats to change the Senate filibuster rules in order for the voting rights legislation to pass along a simple majority vote rather than the two-thirds majority needed to pass most forms of legislation. During a speech in Atlanta on Wednesday, Biden said Democrats should take that step if they can’t pass the legislation otherwise. “President Biden, speaking as a [former] Senator who saw rules changed a lot, talked about the fact that rules change because times change,” Kaine said of Biden’s closed door remarks on Thursday.

To change those filibuster rules, however, Biden would have needed to convince all 50 Senate Democrats. And as Sinema made clear before the meeting began, he doesn’t have her vote. Manchin has said he’s reluctant to change the rules, and other Democrats are privately hesitant as well.

“I hope we can get this done, but I’m not sure,” Biden said during brief remarks after the caucus meeting wrapped around 2:15 p.m.

Some Senators believe Biden’s methods have pushed to hard into already existing divisions, including when he created a stark contrast during his Atlanta speech, putting those who oppose voting rights legislation on the same side as Alabama segregationist governor George Wallace and President of the Confederacy Jefferson Davis. “Perhaps the President went a little too far in his rhetoric,” Senator Dick Durbin, a Democrat from Illinois, told CNN’s Jake Tapper on Jan. 12.

But if there was anything for Democrats to celebrate during Biden’s remarks, it had dwindled further by late afternoon. Around 4 p.m., Manchin put his foot down. “I will not vote to weaken or eliminate the filibuster,” he wrote in a statement. (Later that evening, Manchin and Sinema met with Biden for more than an hour at the White House to continue discussing voting rights.)

Despite all the applause, motorcades and fanfare, Biden still couldn’t answer the first question called out before the meeting started: “Mr. President, how do you get this done?” 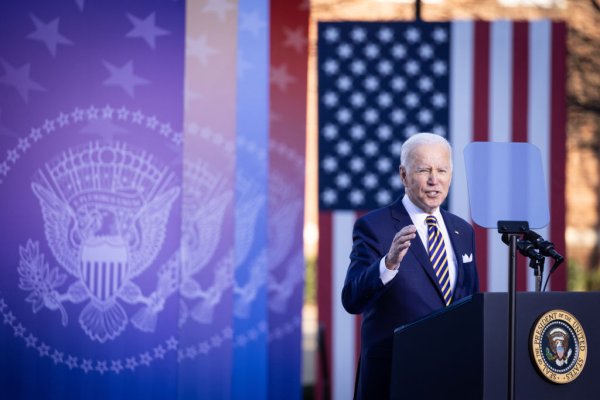 Why Biden Flipped on Ending the Filibuster
Next Up: Editor's Pick