What the History of the Word "Insurrection" Says About Jan. 6

Thousands of Donald Trump supporters storm the United States Capitol building following a "Stop the Steal" rally on January 06, 2021 in Washington, DC. The protesters stormed the historic building, breaking windows and clashing with police.
Spencer Platt-Getty Images
Ideas
By Hawa Allan
Allan is an attorney and author whose work has appeared in the Chicago Tribune, Los Angeles Review of Books, Lapham’s Quarterly, and the Baffler, among other publications. Her new book is Insurrection: Rebellion, Civil Rights, and the Paradoxical State of Black Citizenship

Ever since a mostly white mob stormed the U.S. Capitol after attending a Trump-headlined “Stop the Steal” rally on Jan. 6, 2021, there has been an ongoing and heated debate over whether to call the event an “insurrection.” This much is undisputed: hundreds of rally attendees—some armed with metal flagpoles, baseball bats, pepper spray and stun guns—smashed their way into the Capitol building and loitered in the halls, splintering off to rummage through offices or maraud an empty chamber of Congress. Five people died on that day as a result of the clash between the crowd and Capitol police, and at least 140 were reportedly injured. However, the interpretation of those facts has largely diverged into polar opposites.

An “insurrection,” by definition, is a “violent uprising against an authority or government.” It is clear that Capitol stormers who dissented against the election outcome, or even sought to obstruct Congress’ certification of the election, were rising up against the government. The crux of the contention among commentators, though, lies in whether the crowd was truly violent—an attribution that has faced resistance. This distinction determines whether those who breached the Capitol are to be accurately described as “rally goers” or “rioters,” “patriots” or “terrorists,” “peaceful protestors” or “insurrectionists.”

None of these labels are benign or interchangeable. To declare the crowd “violent” implicitly justifies state action to subdue or punish its members. While law enforcement may stand by and passively patrol “peaceful protests,” it has license to forcefully crack down on “insurrections.” Courts are called to uphold First Amendment rights of “rally goers,” and to read the Riot Act to “rioters.”

This war of words is nothing new. Long before the debate over whether the January 6 event was, essentially, a “protest,” a “siege,” a “coup,” or, indeed, an “insurrection,” there has been ongoing discord over the difference between “riots” and “rebellions.” What’s new is whose actions are being discussed: In the past, this debate often focused on the rising up of Black people in America.

Such naming conventions perform a narrative reframing typified by the summary to the 1968 Kerner Report, which was commissioned by Lyndon B. Johnson to understand the causes of the so-called race riots sparked in 1965 through the “long, hot summer” of 1967. Instead of casting blame on the usual suspects—like the incitement of Black radicals, Communists, or “outside agitators”—the summary highlighted white racism and socioeconomic obstacles facing Black Americans as chief perpetrators of the unrest. In this vein, widely referring to an event as a “riot” or a “rebellion” is more than a matter of words. It could very well mean the difference between, say, intensified policing and socioeconomic reform, (if any action at all).

The word “insurrection” is also part of this history. Its recent usage resurrects a fairly antique term once widely used to refer to uprisings by the enslaved. The enforcement of slavery in the U.S. effectively stigmatized all African-descended persons in the country as potential insurrectionists, as to enslave someone is to simultaneously give rise to an impulse toward liberation. The history of “insurrection” and Black people in America, however, continues far beyond the slavery era. As I discuss in my book Insurrection: Rebellion, Civil Rights, and the Paradoxical State of Black Citizenship, use of the Insurrection Act of 1807—which allows the president to deputize the state National Guard and/or dispatch federal troops to quell domestic unrest—has historically been part of the ongoing and bloody battle to fully incorporate Black Americans as citizens of the U.S.

Although the word “insurrection” was not technically defined in the text of the Act, it was effectively defined in practice. From Nat Turner’s rebellion; to pro- and anti-slavery clashes over whether territorial Kansas would become a free- or slave-state; to the Detroit riots of ‘43 and ‘67; to the desegregation of public schools in Alabama, Arkansas and Mississippi; to the march of civil rights protesters from Selma, Ala., to Montgomery; to the Los Angeles riots in ‘92—the extraordinary presidential power to domestically deploy federal troops under the Insurrection Act has largely been invoked to either suppress uprisings against racist systems, on the one hand, or to enforce the civil rights of Black Americans, on the other. That President Trump threatened to invoke the Act in response to the nationwide Black Lives Matter demonstrations over George Floyd’s killing is only a recent extension of this pattern.

This pattern paints an unstable portrait of Black Americans—treated, under the Act, as both wards and enemies of the state. Despite “progress” and changes in law, the Act’s invocation nonetheless reflects the enduring stigma of Black people in America as potential insurrectionists. Even when the Act was invoked to enforce the desegregation of public schools in the South or defend the rights of civil rights protesters to march from Selma, for example, the people often described as “rising up” are the Black activists who practiced civil disobedience. Meanwhile staunch segregationists like Alabama governor George Wallace—even when their actions defied the law—have not been similarly typecast as “insurrectionists.”

And, of course, the contrast between the militarized show of force in the D.C. during the Black Lives Matter protests of 2020 and the paltry staffing of law enforcement at the Capitol during the ‘Stop the Steal’ rally reveals a recent and undeniable picture of who government officials have tended to regard as potential insurrectionists.

Defining the mostly white crowd that stormed the Capitol on January 6 as “insurrectionists” does more than set a narrative mood, it represents a major narrative shift—expanding the traditional role of the insurrectionist beyond the Black actor to the white one. This is not the first time the shift has happened: When Ulysses S. Grant invoked the Insurrection Act in March 1871 to deploy federal troops in South Carolina to help put down the paramilitary Ku Klux Klan, it was abundantly clear that violent Klan members were the “insurrectionists.” But such use of the term has been rare. And for those who resist the word “insurrection” to describe the events of Jan. 6, this history may only underline that it may be a troubling harbinger of future state action that then-president elect Joe Biden was among the first people to use it.

In the end, the resistance of some commentators against the label “insurrection” is, in essence, a defense against being redefined and thusly marked with the presumption of guilt, perpetually scanned by the sensor of societal suspicion, prospectively analyzed as a threat to the state—a predicament traditionally reserved for Black people in the United States. 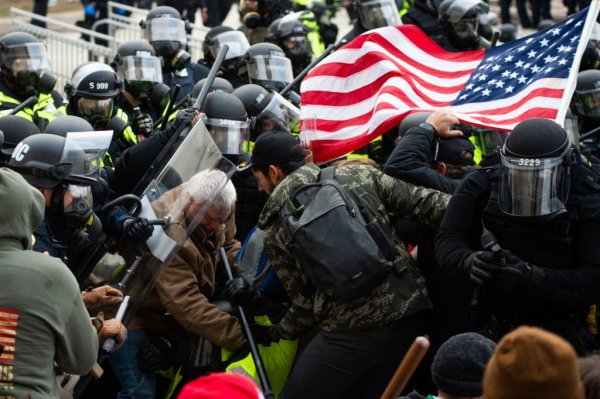 More January 6ths Are Inevitable. How We React Is Crucial
Next Up: Editor's Pick