No Super Bowl this week means there’s no excuse to miss Downton Abbey, but just in case — here’s what you missed.

His Lordship is going to America! A telegram arrives with news about Uncle Harold, and Robert has to go help him. Something about a Senate committee. Uh-oh. He’s going to take Thomas with him as a valet because Bates needs to stay with Anna — which means Mrs. Hughes had to tell Mary what happened to Anna, so she could intervene on her behalf. Anna is glad that Mary knows, but she still doesn’t want to talk about it — though she may have no choice. (We’ll get to that later.)

First, a word about the pigs. Last week’s recap wondered whether the pigs would be important, or if they were just some sort of token of modern farming that generated way more dialogue than they deserved. Apologies, as the pigs have turned out to be quite important. Robert is going to miss the arrival of the pigs, and Mr. Blake — the government man who thinks landed estates are phooey — is nervous that the Crawleys don’t understand how difficult it is to operate a pig farm. He argues with Mary over whether the gentry expect to be able to keep their power and land and money without working for it. He’s proven wrong, however, when he and Mary go to see the pigs in their new home and find that they’ve kicked over their water trough and are dangerously dehydrated. Blake and Mary work together, in the mud, to save the pigs, and by the end of the night they’re friends; he’s impressed that Mary got her hands (literally) dirty, had a playful mud fight with him and even made them scrambled eggs as a snack.

Though the pigs were important, the heart of this week’s episode was two potential scandals: one for Rose and one for Edith. Edith, still pregnant and still with no word from Michael Gregson, makes plans to go to London; Rose tags along, of course.

Rose’s potential scandal is the predictable one: she sees Jack, the handsome band leader, for a romantic row-boat ride. He asks what she expects to come of their interracial courting, and she tells him to just live in the moment. It’s a nice idea, but Rose is sure to find out things aren’t so easy.

Edith, meanwhile, knows things aren’t easy. The reason she’s gone to London is to have an abortion. Before leaving, she asks her mother whether she’s a bad person; Cora responds, “We all have bad feelings, it’s acting on them that makes you bad” — hardly a comfort to Edith who, when made to tell Aunt Rosamund where she’ll be when in London so that Rosamund can serve as her alibi, is reminded that what she’s about to do is illegal and dangerous. Rosamund tries at first to talk her out of it, but Edith has made up her mind that she can’t bear to be a social outcast with a bastard child — “I am killing the wanted child of a man I’m in love with, and you ask me if I’ve thought about it!” — so Rosamund says she’ll come with her. When they get to the shady abortion site, it’s an unmarked flat, clean-looking but dark. A woman is crying in the next room. Edith, remarking that she loves Gregson and thinks she’ll no longer be able to bear to see her niece and nephew after this, turns out to be less decided than she thought. She changes her mind, returning to Downton with Rose and a secret that she won’t be able to hide much longer.

Speaking of secrets coming out, Lord Gillingham drops by Downton, as he’s wont to do, and brings his valet, Green, with him — the man who assaulted Anna. Even though Gillingham is engaged, he makes no secret of his affection for Mary, and neither does Evelyn Napier, who comments that ever since the pigs incident there’s even more competition because she’s won over Mr. Blake. The real drama, however, is downstairs. Mrs. Hughes confronts Green in the boot room (if those walls could talk!) and tells him she knows what he did and he better watch himself if he values his life. He continues to be terrible, accusing Anna of being drunk that night, but Mrs. Hughes isn’t having it. Later, in front of all the servants, that night’s Dame Melba performance comes up and Green says that he hated the singing so much that he went downstairs, which we know to be where the crime occurred — at which point Baxter, who has been charged by Thomas with figuring out why Bates couldn’t go to the U.S., sees something pass over Bates’ face. This secret (and maybe Green himself) are not long for this world.

The night’s lighter entertainments were:

Dowager Zinger of the Week: [feverish mumbling]
History Lesson of the Week: The ship on which Robert and Thomas sail for the U.S. was a real liner. The first SS Cameronia was torpedoed during World War I and sank; a second ship of the same name launched in 1919 and plied the Glasgow-Liverpool-New York route. It was sold and scrapped in 1957. 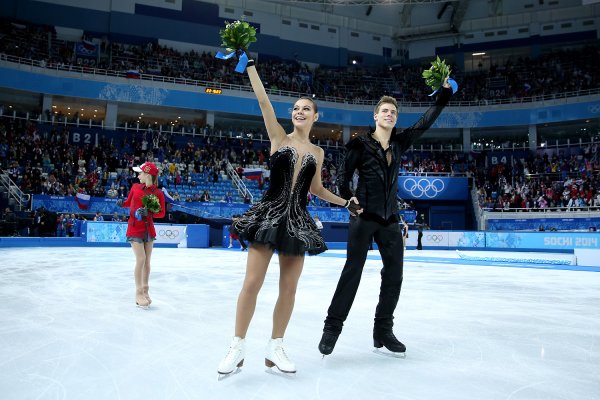 Lessons from The Team Event: Why It's Tough to Be a Skater If You're Not From Russia
Next Up: Editor's Pick