We Must Learn From the Failed Global Response to COVID-19

In the world of international affairs, non-traditional security threats are not new. Many of us have spent decades analyzing and conducting contingency planning for the sudden advent of developments like a pandemic. And yet, despite all the time and resources invested, the COVID-19 pandemic still caught the world woefully unprepared.

Beyond learning from the woeful manner in which this COVID-19 pandemic has been handled both nationally and internationally, there are several significant ramifications for global politics, the economy, and the U.S.-China relationship that warrant serious consideration.

First, COVID-19 has damaged global institutions while simultaneously strengthening the power of national governments. Without delving into a political debate, the WHO could have done much better in responding to the COVID-19 crisis than it did. Instead of the WHO taking the lead on effective early warning, establishing early mechanisms for global tracking and notifications, and coordinating global vaccine distributions, national governments have reasserted themselves as the only reliable mechanism to shield their citizens from harm. Indeed, across the board, on both the pandemic and the faltering economic recovery, we are witnessing the fundamental return of the nation state to the absolute forefront of international politics. This is a phenomenon that bears watching because COVID-19 has created new powers and potential new intrusions by the state into society, including new digital surveillance technologies that were previously the province of authoritarian political systems. This has implications not just for China, but also for democracies around the world.

A byproduct of this burgeoning of the power of the nation state is the further rise of nationalism itself. This nationalism has primarily taken two forms: “COVID nationalism” and “vaccine nationalism.” With people around the world looking to their national and provincial governments for confidence and security, the consequence is that societies turn inward and become more guarded, more selfish, less globally-oriented, and more nationalist. We also see that reflected in the rolling obscenity of global vaccine distribution, where vaccines have been allocated in a non-coordinated fashion, oblivious to human need and often driven by foreign policy imperatives. The losers from vaccine nationalism are the most vulnerable, who have fallen off the world’s political radar screen.

Second, COVID-19 has also wrought havoc on the global economy. Economists are still measuring this, in terms of lost production, economic “scarring”—particularly on employment—and a burgeoning and re-legitimized protectionism as global supply chains have failed on distributing both PPE and vaccines. For example, America’s workforce is 8.5 million people smaller than 12 months ago. That provides just one snapshot of the economic impact in terms of lost employment. Global foreign direct investment also fell 35 percent in 2020, and while around two-thirds of that loss was recovered in 2021, the recovery remains uneven. The same difficult picture is emerging for many economies around the world.

Third, COVID-19 has accelerated the pre-existing strategic dynamics between China and the U.S., fostering a relationship even more problematic than before. COVID-19 provided a strategic opportunity for bilateral cooperation and global leadership. Both governments failed. Instead, Beijing went into political hyper-drive to try and prevent being blamed for the original outbreak in Wuhan so as to protect the party’s political legitimacy at home and abroad. As for Trump’s interest in dealing effectively with the pandemic, either at home or abroad: the less said the better. But the collapse in bilateral public health collaboration in the midst of a genuine global crisis was both tragic and avoidable. Thirteen years ago, at the onset of the global financial crisis, the international community did work together, through the G20 and under the leadership of both U.S. presidents George W. Bush and Barack Obama. By and large, that approach worked. It is appalling that we have now forsaken both the political spirit and the essential public policy machinery that was deployed so effectively just over a decade ago.

One last dimension to the current crisis which confronts us all is the question of what sort of world has now emerged from the public health, economic, and foreign policy ruins of COVID-19. China has sought to deal with COVID-19 by imposing a zero tolerance policy. It is now the only country of the 193-member UN to have a strategy of total virus elimination and suppression. Although there has been some internal debate in Beijing on whether this remains a cost-effective and realistic strategy amid the emergence of new variants, so far the Chinese leadership has squashed any change of policy. How this works out will have implications for how the rest of the world is able to engage with the China of the future. This is not just a practical question of future travel, diplomacy, and business. It is also a question of hardening mindsets, as China cuts itself off from the rest of the world and runs a risk of becoming a second “hermit kingdom” similar to North Korea. We do not know yet the full consequences of China’s self-isolation on how Beijing now views the world, and how the rest of the world views Beijing. But it’s certainly not going to help.

Isolation will also serve to underscore the radical differences between the two countries’ competing political ideologies and systems. The Communist Party proclaims virus suppression as evidence of the superiority of its system in 2021 (while ignoring its systemic failures in containing it at the source in early 2020, when there was still time to do so, because local officials were too fearful of political retribution from the top to deliver bad news). At the same time, the freedom-loving West has, by and large, been shambolic in its floundering efforts at suppressing one variant after another. Meanwhile, as Gordon Brown has recently reminded us, neither China nor the West seem to have politically grasped the central fact that the world will remain vulnerable to mutation (as with the Omicron variant) until we recognize that we must inoculate, contain, and eliminate COVID-19 in the developing world as well as the developed world.

The ramifications of the COVID-19 pandemic on international politics and the global economy are therefore very real. We are witnessing the re-emergence of the state, the rising appeal of nationalism, the discrediting of international institutions, the deep scarring of the global economy, and the greatest setback in global poverty reduction in decades. And on top of that, it has reduced U.S.-China relations to their rawest state in half a century.

We thus now find ourselves in a decade of living dangerously. This is all the more reason for China and the U.S. to learn from the mistakes of the past two years and establish a new diplomatic framework to effectively manage their strategic competition, create the political space for effective dialogue, and enable collaboration to handle both future viral mutations as well as other crises facing the global commons, such as climate change. 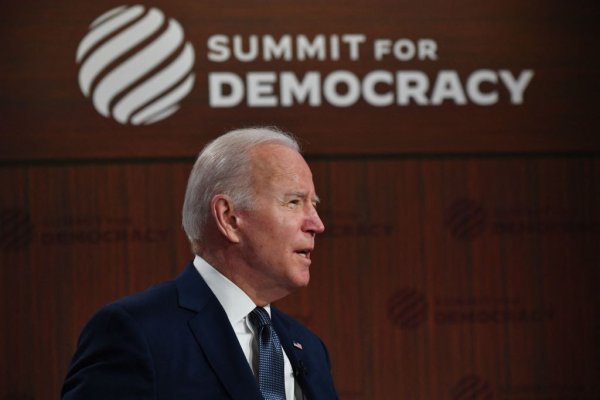 Joe Biden’s Democracy Summit Is the Height of Hypocrisy
Next Up: Editor's Pick