Russia Steps Up Pressure on Google With $98 Million Fine

A Russian court slapped Alphabet Inc.’s Google with a fine of 7.2 billion rubles ($98 million) Friday for failing to remove banned content, the largest such penalty yet, as the authorities escalate a crackdown on foreign technology companies.

The Moscow court cited the company’s repeated failure to comply with orders to take down content. The fine was calculated based on Google’s revenue, it said.

Google is studying the ruling and then will determine its next steps, the company’s press service in Moscow said in a statement.

Russia has stepped up its confrontation with foreign social media and internet companies this year in what the government calls a campaign to uphold its digital sovereignty. Regulators have levied fines and slowed content in a bid to force companies including Google and Twitter Inc. to delete posts encouraging unauthorized protests and other material deemed illegal.

The government is also pushing tech companies to comply with its increasingly strict laws on localizing data storage. This year, Google and Apple Inc. removed a protest-voting app from their Russian stores during parliamentary elections after the authorities threatened to imprison their local staff.

Until the latest ruling, however, fines for failure to remove content were generally insignificant. In September, Russia’s federal communications watchdog said companies that did not delete content could face fines of 5% to 20% of their annual local revenue.

Google earned revenues in Russia of about 85 billion rubles in 2020, according to the Spark-Interfax database.

“For some reason, the company fulfills decisions of American and European courts unquestioningly,” Anton Gorelkin, a ruling party deputy in the lower house of parliament who sits on the Information Policy committee, wrote on Telegram Friday. “If the turnover fine doesn’t bring Google to its senses, I’m afraid that some very unpleasant measures will be taken.”

Friday’s ruling is the latest legal blow to Google in Russia, after a Moscow appeals court this month upheld an April ruling that ordered the U.S. technology giant to restore Tsargrad’s YouTube account or face escalating fines. The fines can reach as much as 1 billion rubles within nine months.

Russia has become increasingly bold in its attempts to restrict technology companies since its failed attempt to block Telegram several years ago. Following a 2019 law, authorities have upgraded systems they say would allow Russia to completely cut itself off from the internet if needed. — With reporting by Vladimir Kuznetsov and Yuliya Fedorinova. 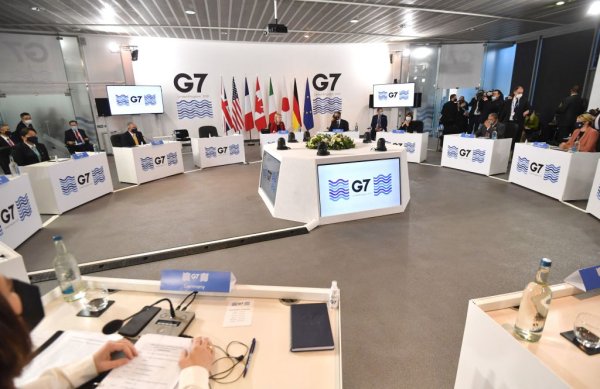 G-7 Warns Russia of ‘Massive Consequences’ Over Ukraine
Next Up: Editor's Pick