Don't Look Up Is More Than Your Standard Climate Cautionary Tale

If you follow the public conversation around climate change, you have probably heard about Don’t Look Up. The Netflix disaster movie, which stars Leonardo DiCaprio and Jennifer Lawrence as ignored scientists Randall Mindy and Kate Dibiasky, uses an impending comet strike as a cautionary tale for climate change. When the scientists deliver news of the potentially civilization-ending comet, leaders in government, media and business fail to meet the moment.

For anyone who follows the push to act on climate change, it all sounds very familiar. But what I found interesting about Don’t Look Up was less the big picture allegory—using a comet as a metaphor for climate isn’t exactly subtle—but the myriad ways the film highlighted the frustrations, debates and controversies that have defined very real discussions around climate change in recent years. It leaves the reader with a looming sense of dread and offers some pointed takes along the way. (Beware: there are spoilers ahead).

One of dynamics the movie hits hardest is in its absolute skewering of the mainstream media’s approach to covering climate change, which for years has been a frustration of climate activists and scientists. In the movie, the New York Herald—a stand-in for the New York Times down to the font in its logo—is well intentioned and set on breaking the news of the impending disaster. But, when the story turns out to be a web traffic snooze and the White House denies some of the story’s particulars, the Herald abandons it.

Worse still is the portrayal of The Daily Rip, a morning show that appears to channel Morning Joe, again relying on a similar logo. The hosts, played by Cate Blanchett and Tyler Perry, are vapid and uninterested. After the scientists are advised to keep it light during their appearance on the show, Lawrence declares on camera that “no one said the end of the world is supposed to be fun.” It’s a frustration shared by climate scientists—and journalists—who have been told at various points to make the grim facts of climate change light and accessible.

Don’t Look Up offers an equally harsh portrayal of private sector initiatives targeting climate change. As leaders in the federal government in the U.S. have struggled to implement big climate change programs, these same officials have turned to the private sector and touted climate-programs pushed by companies as a sign of success. This was the case in the Obama Administration and is once again the case as the Biden White House struggles to pass ambitious climate legislation.

In the film, President Janie Orlean, played by Meryl Streep, abandons plans for the government to address the fast-approaching comet to instead work in partnership with a political donor’s company. The goal is to both avert catastrophe while making money, an approach to tackling climate change that has become standard on Wall Street and in Washington.

I could go on and on with these examples—the portrayal of space travel as a potential savior for humanity and the depiction of science deniers, to name a few—but I want to end with the scene that I kept thinking about for days after seeing the movie. At a quiet dinner with the scientists’ family and friends, moments before the planet faces certain destruction, DiCaprio’s character offers a simple yet cutting statement: “We really did have everything didn’t we, when you think about it.”

The truth is that climate change is unlikely to totally end human civilization like the comet does, but the line—and the movie more broadly—nonetheless offers a critical reminder that our civilization cannot be taken for granted. Right now, we may “have everything” but there are no guarantees about the future, and we may look back one day and say the same.

Scientists, academics and journalists make this point over and over: to inspire action on climate change people need to understand that a different world—for better or worse—is both possible and possibly imminent. It’s an idea that has until recently been largely absent from popular culture. In that sense, Don’t Look Up is a valuable corrective: proof that climate change can be woven into the cultural narrative in an entertaining way while also saying something smart. 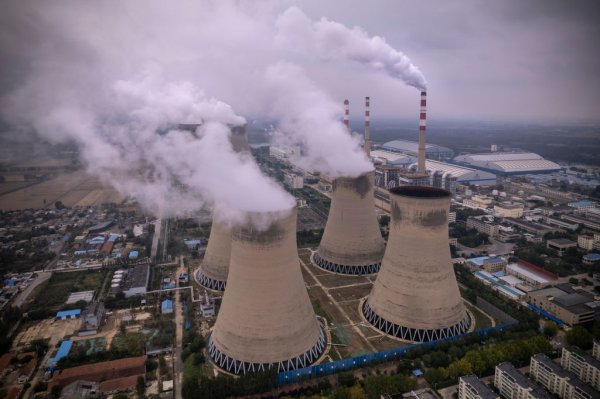 World Got More Power From Coal in 2021 Than Ever
Next Up: Editor's Pick