If the Economy Is Doing So Well, Why Does It Feel Like a Disaster?

Ideas
By Zachary Karabell
Karabell is an author, investor, and commentator. His latest book is Inside Money: Brown Brothers Harriman and the American Way of Power.

Given that, it’s hardly surprising that many Americans are feeling not so good about the country in general and, more specifically, about this thing we call the economy. Yet, the actual data about our economy point in a radically different direction: up.

While the news per se is hardly to blame for any of the issues, the tenor of it certainly highlights where the mood is. And with the new surge in COVID-19 creating even more anxiety and uncertainty combined with the dimming prospects of a massive social spending after Sen. Joe Manchin announced he would not vote for Build Back Better, the coming months are not likely to change the narrative or the shift the mood for the better.

But if you step back, things look different. The various gauges we use to measure the economy are almost all as good or better than they’ve been in years, and in aggregate, better than they been since the beginning of the 21st-century. GDP growth, unemployment rates, average wages have all been moving in the right direction, with unemployment at about 4%, a multi-year low even with places like New York City lagging behind; GDP growth is expected to be above 5.5% for 2021, the best since 1984; wage growth for the bottom of the economic pyramid has been notable for the first time in a generation. In fact, wage growth for the bottom of the economic pyramid has actually been faster than the one thing that dampens the picture: inflation.

Inflation hits those with the least the most. If you are barely scrimping by, having to pay $10-20 more for a full tank of gas and another $5-10 every time you buy food is a serious challenge. But even with inflation running a hot 6.8% in November, low-wage workers are seeing wage increases on average of as much of 8%, as employers scramble to meet surging demand for goods and services. That trajectory may be dented if Omicron leads to nationwide slow-downs but it is unlikely to be halted given a booming economy and pent-up demand that hasn’t yet been sated by a few months of explosive activity. Some dispute whether those gains have been as significant, and given the complexity of calculating, we won’t really know for sure what the wage picture is until later next year. Still, with so many large companies raising minimum wages and so many positions unfilled, there’s no question that low-end workers are doing better even with higher inflation.

In addition, unlike with the stagflation of the 1970s and the subsequent double-digit inflation of the early 1980s, today’s inflation is directly a product of more people with more money consuming more goods and services all at once after a pandemic year of selective consumption. That means that inflation now is a by-product of both government spending that cushioned the economic pain of the pandemic and of everyone from the working-poor to the very rich having more income. Inflation today is a by-product of a strong system, not a harbinger of a troubled one. That doesn’t mean inflation can’t be harmful or won’t end up destabilizing the economy. In that sense, inflation is much like obesity: it is a symptom of affluence, of too much, not a sign of impending contraction or scarcity.

But the public mood and the narrative don’t reflect those statistics. The chasm between how our public understanding of what’s going on economically and what our numbers say is not just a feature of our present. At few points in the past twenty years have Americans felt good about the future for very long. At no point since the bursting of ‘90s tech bubble and the subsequent recession of 2000 have American felt as good about the economy as they did throughout the 1990s, and the high point after twenty years of ups and mostly downs was January of 2020, when confidence about the economic future reached about where it was in early 1990s. And then came COVID-19.

In fact, the past twenty years has been a litany of challenges, each of which dented American confidence and which in aggregate have altered what was once a preternaturally upbeat and optimistic country (albeit one with vicious divisions) into a perpetually pessimistic one. The stock market internet bubble burst of 2000; the botched “hanging chad” election of 2000; the attacks of 9/11; another stock market crash and corporate scandals such as Enron in 2002; the Iraq invasion of its aftermath in 2003-2004; revelations of metadata spying and torture in US military prisons in 2005-2006; the bursting of the housing bubble in 2007-2008 followed by the Great Recession of 2008-2010; a few decent economic years from 2013 to 2016 which nonetheless didn’t prevent the rise of Donald Trump in 2016; the acrimony of the first Trump years and then the pandemic in 2020 and riots and protests over race followed by the contested election and January 6.

Put in that context, the dyspepsia about how we are doing economically makes more sense. So too does that fact that yes, in the past decades, the rich have gotten far richer while the middle has tended to mosey along and the bottom has struggled as it always has. And the rise of China as an economic challenge to American global hegemony has also discombobulated a people and a country that had long defined itself—and prided itself—for being at the top of the global economic pyramid.

It’s not all about how we feel: even while our numbers look good, they mask shifts and changes that can be deeply unsettling and often disruptive. The untenable increase in healthcare costs. The drip-drip erosion of northeast and Midwest manufacturing; the opioid crisis in those regions; the changing composition of a workforce towards more service oriented and often less secure and sometimes less remunerative jobs; the way technology creates change at a faster pace than most of us can easily adjust to, all of that doesn’t show up in GDP and employment numbers but intimately shapes how we live and how we experience life.

If we are to collectively try to assess how to muddle through, distinguishing between sentiment and the numbers we use, however vaguely, to measure what we call the economy is essential. The numbers don’t tell us everything, and indeed tell us little about any one individual or community. They do chart trends over time, and those trends for the most part are unequivocally positive these days.

As we round into 2022, we can appreciate that rarely have things in general been so good in economic terms, even as we acknowledge that rarely have so many of us felt so uneasy and so unconnected to those numbers. It would do us all some good to take a deep breath and acknowledge that we are in much better shape than most of us feared or assumed even a year ago. That doesn’t mean any of us should be complacent, but we all need to check the tendency to see only clouds. 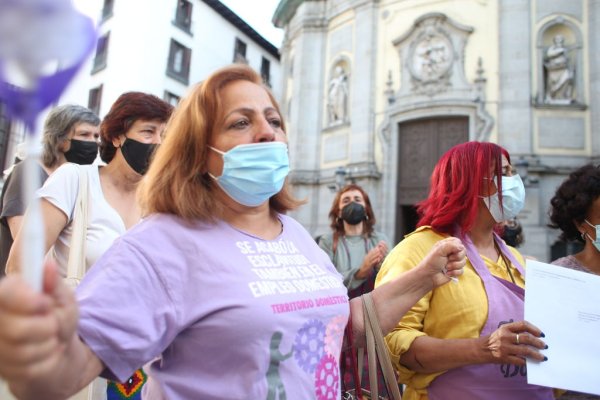 It's Time for a New Progressive Era, With Informal Workers at the Center
Next Up: Editor's Pick