How the Christmas Stories Call the Church to a Different Vision

King Solomon, stained glass, Chartres Cathedral, France, 1145-1155. Detail from the Jesse Tree Window
Universal History Archive/Universal Images Group
Ideas
By N.T. Wright
N. T. Wright, Senior Research Fellow at Wycliffe Hall, Oxford, is the author most recently of Galatians. His new book of devotional readings, On Earth as in Heaven, is to be published in March 2022 by HarperOne.

Two weeks ago I visited our old family church, in the far north of England. I was placing flowers by my parents’ gravestone, in front of memorials to my grandparents, great-grandparents and sundry uncles and aunts. But my eye was drawn, as it has often been, to the Jesse Window in the east end of the twelfth-century church.

“Jesse Windows”—a traditional medieval design in stained glass—display Jesus’ ancestry in the form of a spreading tree. The genealogy goes back a thousand years to King David, and then to David’s own father, Jesse of Bethlehem.

This way of telling Jesus’ story picks up a prophetic text often read at Christmas time. Isaiah Chapter 11 speaks of the coming king as “a shoot from the stump of Jesse” and “a branch [which] grows out of his roots.” The passage promises that “the root of Jesse” will be a sign of peace and hope for all the nations, filling the whole earth with “the knowledge of the Lord.”

Earlier, the prophet described this coming king as “the prince of peace” (9:6). That famous phrase crops up, perhaps wistfully, in many Christmas carols, along with the mention of Jesse himself. A recently popular carol speaks of “A spotless rose” which comes from “the tender root of Jesse.” Flowery language, rooted in scripture, for a horticultural theme.

Isaiah’s original oracles of peace burst in upon a world of warring nations. The prophet saw them, in vivid symbols, as animals who would finally live in peace together in a renewed creation. “The wolf shall live with the lamb; the leopard shall lie down with the kid; the calf and the lion and the fatling together; and a little child shall lead them” (Isaiah 11:6).

That “little child” links back again to the infant Jesus. The picture of animals living in peace under his guidance translates easily into the Nativity scene: Jesus in a manger, Mary and Joseph looking on, with ox, ass, lambs and even camels all clustering round. Killjoy rationalists might object that the stories of Jesus’ birth don’t mention these animals, or that you might actually find a manger in family living quarters; but that’s not the point. The Nativity scene re-expresses Isaiah’s vision in its own symbolic way. The prince of peace, the shoot from Jesse’s stump, will bring all creation into a much-needed new harmony.

Jesse doesn’t appear much in the New Testament, but when he does it’s explosive. Saint Paul, like Isaiah, believed in creation’s coming peaceful renewal. But we often forget how he sees that hope being fleshed out. Jesus’ followers, Paul believed, were supposed to be the working model for creation’s hope. At the climax of his letter to Rome, he urges believers from different ethnic and cultural backgrounds to come together in worship. They are to welcome one another across traditional differences, learning to worship the one God, the father of Jesus the Messiah, “with one mind and one mouth” (15:6). Paul backs up his urgent and eloquent appeal with a string of biblical quotations, saving for the last the telling line from Isaiah 11:10: “the root of Jesse rises to rule the nations, and in him the nations will hope.”

Read More: The Revolutionary Politics of the First Christmas

Paul is here looking through the biblical equivalent of a Jesse window, glimpsing an entire train of thought—in this case, the prophecy of Isaiah 11—in a single line. In his mind, the different ethnic and cultural groups that have come to believe in Jesus are like the different animals that, in the prophet’s vision, will now feed peacefully together, with the little child at their head, ruling through self-giving love.

Under this leadership, traditional opponents, and those nursing mutual suspicions, must find reconciliation. In particular, the long-promised coming together of Jews and Gentiles into a single, renewed family is to be a sign of hope to the world. The Nativity scene, so easy to dismiss as Christian kitsch, still carries symbolic power.

But here’s the problem. The Bible translators of the sixteenth century were determined that ordinary people should worship, and read scripture, in their own languages. Isaiah’s vision and Paul’s theology ought to be within the reach of all. Fine. But in the excitement of using one’s own language, it was easy to ignore the biblical imperative to unity. Why make things complicated by getting together with other language groups?

Ethnic differences have thus quietly pulled us all apart, often picking up theological freight along the way. The big debates of the sixteenth and subsequent centuries were in any case about “how to get to heaven,” which was never the Biblical hope. The Jesse-hope was never about humans “going to heaven.” It was always about heaven coming to earth, fulfilling Isaiah’s promise (11:9) that “the earth would be full of the knowledge of the Lord, as the waters cover the sea.”

Things got worse. Having accepted national and language-based fellowships, the Western churches were unprepared for the secular sociology which suggested that different ethnic groups were effectively different species. We know where that has led. Paul would have been horrified. What about the wolf and the lamb? The book of Revelation (7:9) envisages a great crowd, too big to count, of “every nation, tribe, people and language,” all worshipping together. That’s how the church is supposed to be living already, as indicated by the texts we read at Christmas. Without that, why should anyone believe in the God who holds out hope for the whole creation?

Never in my lifetime have we needed that hope as urgently as we do today. The pandemic is still rampant. The global climate is throwing floods, fires and tornadoes at us. Powerful nations rattle their missiles at one another, while babies starve and refugees drown.

The Christmas stories themselves call us to a different vision. Matthew’s gospel is the most obviously Jewish, but that’s where we find the story of the (obviously non-Jewish) Wise Men coming to worship Jesus. Luke’s gospel is the most obviously Gentile in orientation, but that’s where we find the (obviously Jewish) shepherds coming to find the newborn child. Like the animals around the crib the Christmas scenario opens up to include the world. Shame on us if we shrink that vision to fit our prejudices. Jesus’ followers are called to model God’s hope for the world.

This time last year, Isaiah 11 acquired a new meaning within our family. Our youngest grandchild arrived just before Christmas. To our surprise and delight, his parents named him Jesse. 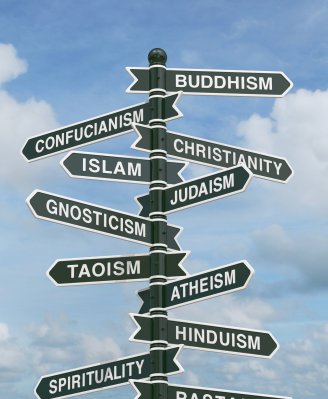 How to Tell Your Family That You Are An Atheist
Next Up: Editor's Pick