The grave of JonBenét Ramsey, 1997
Chris Rank—Sygma/Getty Images
By Olivia B. Waxman

On Dec. 26, 1996, 6-year-old child beauty pageant contestant JonBenét Ramsey was found dead in the basement of the family’s Boulder, Colo. home, along with a ransom note asking for $118,000. Autopsy results released in Aug. 1997 revealed that JonBenét had suffered asphyxiation due to strangulation.

A week after JonBenét’s death, her parents, socialite Patricia Ramsey—the 1977 Miss West Virginia—and businessman John Ramsey made their first appearance on national TV on CNN, pleading for the public’s help finding their child: “There’s a killer on the loose,” Patsy Ramsey said.

Still, 25 years later, no charges have been filed. In Oct. 1999, a grand jury investigation concluded without issuing any indictments, but did accuse John and Patsy Ramsey of “unlawfully, knowingly, recklessly and feloniously permitting a child to be unreasonably placed in a situation which posed a threat of injury to the child’s life or health.” But in 2008, then-Boulder County District Attorney Mary Lacy exonerated the Ramseys after DNA testing of JonBenét’s pajamas matched that of an unknown man. “We do not consider your immediate family, including you, your wife Patsy, and your son, Burke, to be under any suspicion in the commission of this crime,” she wrote in a letter to John Ramsey.

Though the case remains open at the Boulder Police Department, JonBenét’s murder is one of the most famous unsolved true crime mysteries in American history.

John and Patsy Ramsey, the parents of JonBenét Ramsey, meet with local Colorado media on May 1, 1997 in Boulder. Patsy holds up a reward sign for information leading to the arrest of their daughter's murderer.
Helen H. Richardson—The Denver Post/Getty Images

Paula Woodward, who covered the Ramsey case as a journalist in Boulder and is the author of Unsolved: The JonBenét Ramsey Murder 25 Years Later, says the media landscape—and 24/7 cable TV in particular—helped fuel the appetite for sensationalized coverage. Public fascination with the “surreal” multimillion dollar world of children’s beauty pageants, in particular, was a “side effect” of intense scrutiny of the case, as TIME put it in the Jan. 20, 1997, issue.

Read More: The U.S. Is Still Dealing With The Murder of Adam Walsh

“She was in these child beauty pageants that very few people knew anything about, and because the autopsy was not released for eight months, no one understood the viciousness of how she died. And as a result, the fill time was spent discussing pageants,” says Woodward.

“Part of what draws people to news stories are the visual elements, and I think the cache of photographs of JonBenét added to the visual appeal of the story,” adds Danielle Slakoff, assistant professor of criminal justice at Sacramento State University in California. “For example, the photo of JonBenét with ringlets in her hair and a crown of baby’s breath flowers continues to be used when discussing her case, even 25 years on. When people see that photograph, they know it’s JonBenét.”

(In a 2012 ABC News interview, John Ramsey said that he has some regrets about entering his daughter in so many beauty pageants, “only because that possibly might have drawn attention to us.”)

TIME also explained that the tragedy happened at a time when the public was following several high-profile and sensationalized true crime cases. “Memories of the [O. J. Simpson] investigation may haunt local police, but the public fascination with [the Ramsey] case seems to stem from recollections of Susan Smith’s tearful televised pleas to an alleged carjacker to return the two sons she had already drowned in a South Carolina lake,” TIME’s Paul Gray wrote. “Bereaved relatives have become suspects in the court of public opinion. Such before-the-evidence perceptions overshadow the loss of a precious child.”

In its Feb. 3, 1997, issue, TIME published a letter from a reader named Rebekah Gilbert of Yorkville, Illinois, arguing that all missing children should have received media attention comparable to JonBenét. “It is tragic that such a crime must be accompanied by beauty and wealth to merit national concern,” Gilbert wrote.

But wealthy white families can have key advantages in investigations related to child homicide cases, explains David Finkelhor, Director of the Crimes against Children Research Center at the University of New Hampshire

“When kids are missing or kids are abducted, better-off families tend to be able to mobilize resources and advocates, publicize what’s going on and get help in searching,” he says. “You could say that the social class or the race of the family played some role in this [case].”

And Danielle Slakoff says widespread interest in the Ramsey case can also be seen as an example of “missing white woman syndrome,” a term used by scholars and social media users to address, and assess, the trend of missing white women getting more media coverage than women of color. This fall’s comprehensive coverage of the search for 22-year-old Gabby Petito—found dead by homicide in Wyoming after a hiking trip with her boyfriend, who was also later found dead in Florida—most recently sparked discussion of the phenomenon.

“JonBenét’s death—and all the media coverage it received—is a strong example of the media and the public’s fascination with missing and harmed white women and girls,” Slakoff tells TIME in an email. “In many ways, JonBenét fits the ‘ideal victim’ stereotype. She is young, innocent, and blameless. Research—including my own—shows that Black and Latina women and girl victims are not treated the same way by the media. They are more likely to be described as blameworthy in some way.”

Twenty five years after JonBenét’s death, the Ramsey family continues to have hope that the person who murdered their daughter will be found.

“We’re going to keep the pressure on,” John Ramsey told Tamron Hall in a Jan. 26, 2021, interview. “We’re going to keep being public about it in hopes that we can get more information, get the police to do their job, whatever it takes… This is a cloud that’s going to hang over our family until we find an answer—that’s why this is important to me.” 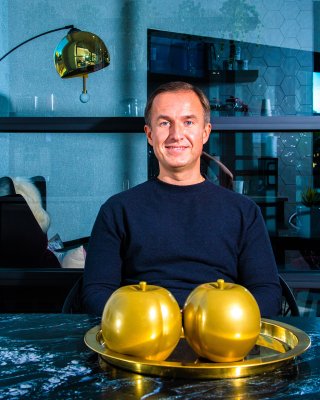 This Infamous Russian Hacker Wants Your Crypto Investment
Next Up: Editor's Pick