Some people love a nice, cheerful movie at holiday time. For everyone else, there’s Nightmare Alley, Guillermo del Toro’s thoughtful and darkly glamourous reimagining of both William Lindsay Gresham’s 1946 novel and the 1947 film noir that sprang from its dark seed, starring Tyrone Power and Joan Blondell. Del Toro’s Nightmare Alley, set in the waning days of the Depression, is neither a remake nor a strict adaptation, but rather a melding of both, its own sleek, obsidian creature. It marries the despair of Gresham’s superb, unsparing novel with the creepy angularity of Edmund Goulding’s film version. And it features a terrific, multitextured performance by Bradley Cooper as the story’s ambitious, amoral antihero, Stanton Carlisle, who begins as a carny underling, rises to become a show-biz smash, and ultimately—well, never mind for now where he ends up. It’s enough to say that Cooper ably meets every demand the film makes of him. This an unnervingly compassionate portrait of a truly bad egg.

We first meet Stan just as he’s committed what we’re sure is a crime—we see the coverup, but not the deed, and then we watch as he boards a bus to a town that might be called Nowhere, Anywhere. He hops off and somehow insinuates himself, like a parasite, into the workings of a traveling carnival. He tells barker Clem Hoatley (a suitably crusty, calculating Willem Dafoe) that he’ll do any odd job. He also learns about a carnival attraction so inhumane that some performers won’t join a troupe that features one. The individuals who apply for this job have reached the depths of human desperation; those who take advantage of them are perhaps only nominally human.

Stan learns the ropes of carnival life quickly, even as he gets a hand—in a manner of speaking—from the troupe’s resident medium, Zeena (Toni Collette). Zeena’s husband, Pete (David Strathairn), helps out with her act, managing as well as his debilitating alcoholism allows. Before Pete’s drinking got the better of him, these two had been a high-class team, playing tony venues and raking in the dollars with their polished mind-reading act, thanks to a complex system of codes they’d worked out and memorized. Though Pete’s condition long ago forced them to abandon the act, he still treasures the book in which he painstakingly recorded their secret technique. Stan eyes the book like a buzzard circling a dying man in the desert; he sees his future in the pages.

He needs an accomplice for his show-biz ascension, and the easy choice is carnival sweetheart Molly (Rooney Mara), whose act involves enduring killer-level jolts of electricity. But can she survive Stan? Together, they leave carnival life behind. The show they’ve borrowed—or should that be stolen?—from Zeena and Pete belongs not inside shoddy canvas tents but in grand ballrooms, where they wow dowagers and elderly banker types with their astonishing feats of alleged mind-reading. But while Molly respects the limits of the act, Stan is always calculating ways to make it grander. Why not try a little phony spiritualism, as a way of squeezing even more money out of grieving rich people? For this, he needs a new accomplice, and he finds it in chilly-elegant Dr. Lilith Ritter (Cate Blanchett), a psychoanalyst whose clients include society’s crème de la crème.

All of that sounds like bitter good fun—and it is, in a way. But if del Toro is lavish with stylish noir touches—like Dr. Ritter’s hourglassy Adrian-inspired day suits, or the oaky interior scenes, lit by a soft, ‘40s deco glow—he never stoops to winking at this material. And if you’ve read Gresham’s novel—or even if you’ve just seen Goulding’s movie—you know that’s the only way to play it. Nightmare Alley isn’t suitable as a vehicle for kitschy noir nostalgia. We can take pleasure in Stan’s square-shouldered overcoats, or Dr. Ritter’s rich-bad-gal reverse-moon manicure. But in the end, this is a story about the corners of the human heart where you really don’t want to look.

Del Toro—who cowrote the script with Kim Morgan—has called Nightmare Alley a monster movie in which all the monsters are human, an apt description. The movie’s roadmap into darkness is set up vividly within its first section, in the second-most most moving part of the film: In these early carnival scenes, we get a sense of the domestic life of Zeena and Pete, of the hardscrabble coziness of their frayed-satin digs, and of their devotion to each other. Collette and Strathairn are marvelous in these scenes: Pete is broken in ways that the camera translates clearly, without spelling them out. He can barely bring himself to look into his wife’s eyes, even though there’s nothing but tenderness there. Stan will go on to deceive other humans in more overtly devious ways—Richard Jenkins and Mary Steenburgen are both fantastic as two of his clueless, grief-stricken marks—but Pete and Zeena are his most profound victims, the two people in his orbit least deserving of his weirdly veiled yet shiv-like cruelty.

He also visits that cruelty on his romantic and professional partner, Molly, though as Rooney plays her, she’s a girl who knows what’s what—her lunar earnestness doesn’t make her a dope. Still, you feel something for her when Stan berates her for a minor gaffe during one of their performances. And at that moment, still quite early in the film, we’re forced to see Stan for what he is—to acknowledge everything we knew him to be from the first frame, even as we resisted believing it.

Because even when Cooper’s playing a bad guy, there’s a part of you that wants to believe he isn’t. Cooper makes a perfect Stan. He may be even more perfect than Tyrone Power, who, with his swooning-from-the-balcony handsomeness, so impeccable you didn’t dare trust it, was pretty perfect to begin with. Cooper can come off as both wily and guileless in the same moment. As Stan, he’s bad news delivered in a candy wrapper. When we see Molly falling for his sweet talk, we know she should run a mile, even as we’re bolted in place—we’re not going anywhere, because we need to see what this guy does next. Opportunist, manipulator, murderer—what hat won’t Stan try on for size? Yet when he swears, as he does more than once, that he never touches even a drop of whiskey, his aggressive self-assurance is as big as a ship’s S.O.S., and we see his downfall on the horizon like a shipwreck premonition.

That’s the arctic chill of Nightmare Alley, enhanced perfectly by Dan Laustsen’s faded-brocade-and-polished-marble cinematography: We see Stan’s fate long before he does, even before his friend Madame Zeena reads it in her tarot cards. If Stan’s circuitous betrayal of Pete and Zeena is the first great heartbreak of Nightmare Alley, the second and greater one hits with the movie’s final line, as Stan greets the horrible fate we’ve already glimpsed for him—one that makes us feel complicit, in a way, because it has been so perversely pleasurable to watch him work his selfish schemes. Now, as the movie delivers him to his bleak future, Stan looks relieved, radiant, ready for his own personal canonization. It’s as if he’s seen God, at last. And that’s why this Nightmare Alley isn’t exactly fun. You’d call it more of a knockout. 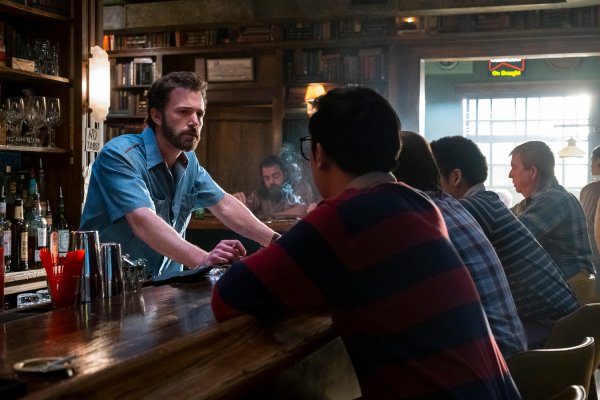 Ben Affleck Isn’t the Star of The Tender Bar—But He’s the Reason To Watch
Next Up: Editor's Pick