In the days leading up to the chaotic American withdrawal from Afghanistan, John Sopko’s staff began receiving urgent emails from the U.S. State Department to shut down public access to his agency’s website. As Special Inspector General for Afghanistan Reconstruction (SIGAR), Sopko is charged with producing reports cataloging the waste, fraud and abuse that has plagued 20 years of U.S. reconstruction spending in Afghanistan.

On Aug. 16, a day after the U.S.-backed government collapsed, State Department officials requested the SIGAR office temporarily disable its website where more than 700 reports and audits compiled over the past 13 years are free and available to the public. All of this oversight work needed to be analyzed and scrubbed as a precaution, the department officials wrote. Their fear was that SIGAR’s reports might contain information that identified Afghan allies or other sensitive data that may put innocent people at-risk of Taliban retaliation.

Sopko was sympathetic to the concern. After all, SIGAR itself was in the middle of trying to ensure its staff was evacuated and all its Afghan partners were safe. But it was also an uncomfortably familiar request. For years, across multiple administrations, Sopko felt pressured by the State and Defense Departments to needlessly redact or classify information in its reports that detailed major failings in the Afghan government or military. Meanwhile, he’d watch senior U.S. leaders publicly praise the smallest signs of progress, reassuring Americans that things in Afghanistan were now on the right track.

So Sopko pushed back, asking for the State Department comptroller to put down in writing the reason for the request and why SIGAR’s reports, which have been publicly available for years, suddenly posed a risk. After receiving State Department Comptroller Jeffrey Mounts justification on Aug. 19, SIGAR pulled down hundreds of reports and scrubbed the information. Later, Sopko ordered his team to review each of the 2,400 redaction requests. He says his agency found all but four to be without merit.

“They may have had good intentions, but it made no sense,” Sopko tells TIME. “You don’t ask an agency to do something that’s against its regulations or against its policies unless you have a really good justification. And the problem was, we never got an explanation other than, ‘This could possibly, maybe, we think, harm somebody.’”

Perhaps no one in Washington is more knowledgeable about America’s many failures in Afghanistan than Sopko. Since taking charge of SIGAR in July 2012, he’s been immersed in the details of a war that’s killed more than 2,400 U.S. troops, wounded another 20,000, and maimed or killed hundreds of thousands of Afghans over two decades.

But after a decade of investigation, chief among Sopko’s concerns about America’s handling of the war isn’t a particular failed multimillion-dollar project, ill-conceived diplomatic strategy or shoddy battle plan. It’s the U.S. government’s inability to be honest with the American people.

Sopko says Washington’s inclination to classify information about the war severely hobbled public discourse and may have caused it to drag on years longer than it should have. So when someone asks him to redact information, he needs a good reason why. “The government doesn’t classify good news,” Sopko says.

Afghan people climb atop a plane as they wait at the Kabul airport in Kabul on Aug. 16, 2021.
Wakil Kohsar—AFP/Getty Images

After the Taliban takeover, the U.S. government scrambled to save Afghan partners that were in danger. The Pentagon said it temporarily removed more than 120,000 photos and 17,000 videos of the Afghanistan War from its digital archives. Similarly, the State Department insists all redaction requests sent to SIGAR were to ensure partners inside the country remained safe from Taliban reprisals. But Sopko says State went beyond an abundance of caution, asking his agency to scrub widely known facts, such as former Afghan President Ashraf Ghani’s name, the location of the U.S. Army’s Redstone Arsenal in Huntsville, Ala. and the name of a USAID official who publicly testified before Congress in 2017—even though video footage of his testimony remained on YouTube. “Do you really think the Taliban doesn’t know who the president of Afghanistan was?” Sopko says. “This was silly. This was also a waste of taxpayers money. And it didn’t help anyone.”

Sopko had locked horns with U.S. officials over redaction requests before. In 2015, for instance, the Pentagon requested SIGAR classify information on the performance of the Afghan security forces, allegedly requested by the Afghan government on the grounds that it tipped off the Taliban to the forces’ posture. Sopko says the request included information such as “casualty data, unit strength, training and operational deficiencies, tactical and operational readiness of Afghan military leadership, comprehensive assessments of Afghan security force headquarters leadership; and operational readiness rates down to the corps level.”

The U.S. spent at least $84 billion to train and equip Afghanistan’s 300,000-plus troops and police, which vastly outnumbered the estimated 75,000 Taliban fighters now in control of the country. The Afghan government owned an air force of attack planes and helicopters, armored trucks and heavy weaponry. In the end, though, not one piece of this multibillion-dollar arsenal, which now belongs to the Taliban, could replace the willingness to fight or the instinct for survival, as Afghan troops saw that fellow soldiers who surrendered to the militants were allowed to live and those who fought were often brutally executed.

Americans knew the day would come when U.S. forces would finally withdraw from Afghanistan, leaving the Afghan government to fend for itself. But it was widely believed that Afghan security forces could stave off Taliban offensives against major population centers, like Kabul, for a year or possibly more. Instead, Afghan defenses lasted a matter of weeks—a collapse so sudden and complete that many Americans were stunned when it finally did.

If more information in SIGAR’s reports on the forces had been unclassified, Sopko wonders, could it have had a larger impact on the way the conflict ended? There were no shortage of media reports documenting bad news in Afghanistan, of course, but what if the American public saw the U.S. government’s archive of facts detailing the years-long history of dysfunction, corruption and poor performance? “Maybe the war would have ended earlier,” he says. “We’ll never know, because the information was classified.”

Some aspects of any war must be kept secret, Sopko acknowledges, such as human sources of intelligence and methods by which the information is obtained. However, an inspector general shouldn’t scrub information because it’s politically damaging.

Craig Whitlock investigated the government’s deception over the war in a 2019 Washington Post series and 2021 book, “The Afghanistan Papers,” a searing report largely based on previously classified SIGAR documents which he obtained after filing multiple public-records requests and two Freedom of Information Act (FOIA) lawsuits. “U.S. officials failed to tell the truth about the war in Afghanistan throughout the 18-year campaign, making rosy pronouncements they knew to be false and hiding unmistakable evidence the war had become unwinnable,” Whitlock writes.

A group of military families and veterans watch President Joe Biden's speech announcing that all troops are out of Afghanistan, in Long Beach Calif., on Aug. 31, 2021.
Apu Gomes—AFP/Getty Images

Sopko, 69, earned a reputation in the late 1970s and early 1980s as a hard-charging federal prosecutor in Ohio. He notably helped secure convictions of six Cleveland mafia members on racketeering charges. In 1982, he set off to Washington as a congressional staffer, working for Representative John Dingell of Michigan and Senator Sam Nunn of Georgia, both Democrats.

Thirty years later, President Barack Obama appointed to Sopko take over SIGAR, a position created by Congress in 2008. Sopko replaced Arnold Fields, a retired Marine general, who resigned after critical assessments of the agency’s audits. Almost immediately after his appointment, Sopko drew fire from inside Washington for being outspoken with the media and combative inside government—qualities not often found among inspectors general.

Over the last decade, his job has focused on digging into America’s $146 billion reconstruction efforts in Afghanistan. Next year, he’s been tasked with finding out why nearly all of it failed. “It was our largest development project in history, it was the United States’ longest war in history and we should learn some lessons about what happened,” Sopko says. “Not only to point fingers, but to learn some lessons. Because mistakes we made there, we may very well make, again, someplace else.”

America’s war in Afghanistan is over, but Sopko says oversight on what went wrong has just begun. He just hopes his findings will make it past government censors. 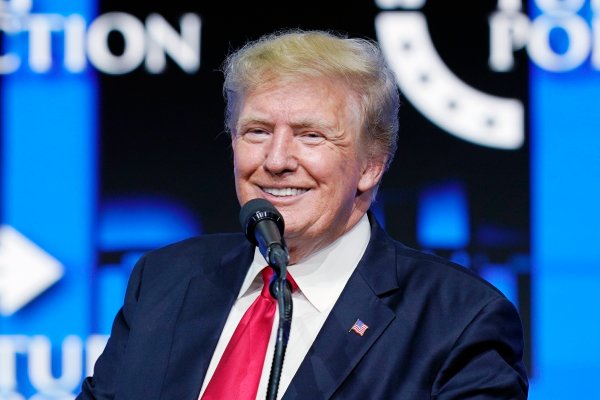 Donald Trump Received a COVID-19 Booster Shot, And Got Booed for It
Next Up: Editor's Pick