Freight wagons containing mined platinum rich rock stand on tracks in the mine shaft ready for transport to the surface during a media tour of the Sibanye-Stillwater Khuseleka platinum mine, operated by Sibanye Gold Ltd., outside Rustenburg, South Africa on Wednesday, Oct. 16 2019.
Waldo Swiegers/Bloomberg —Getty Images
By Felix Njini and Paul Vecchiatto/Bloomberg

South Africa ruled out challenging a High Court ruling that struck down some key changes to mining rules that govern Black ownership targets, in a move that may potentially revive investor interest in the industry.

In September, the High Court struck down some key provisions introduced to the mining charter in 2018 by Mines Minister Gwede Mantashe. It included a rule stipulating that an ownership target of 26% for Black investors in South African min—ing companies would remain in perpetuity. That meant miners that had previously met the threshold would need to find new Black shareholders if the original ones exited their holdings.

The court also ruled that some of the other changes made to the charter were unconstitutional as the minister doesn’t have the power to make law. The court backed a challenge by an industry lobby group representing the biggest producers in South Africa.

“Appeals to the Supreme Court of Appeal and the Constitutional Court, the outcome of which remain uncertain, may take several months or years to conclude, and will prolong legal uncertainty and delay transformation,” the Department of Mineral Resources and Energy said Tuesday in a presentation to lawmakers.

The mining charter, first introduced in 2004, is aimed at distributing the benefits from mining more widely among South Africans to make up for racial discrimination during apartheid. Mining exploration and investment in South Africa, the largest producer of platinum and rhodium and formerly the world’s top gold miner, have dwindled in recent years amid the regulatory uncertainty.

The ministry said it would enforce mining rules according to the court ruling. It would also reconsider other options to promote transformation in ways that reinforce “legal certainty.”

Mining companies “recommitted the industry to transformation” in talks held between the ministry and officials from the Minerals Council South Africa, the industry lobby group said. “Minister Mantashe has also acknowledged this commitment as one of the reasons not to lodge an appeal” against the court ruling in September, the council said in a statement. 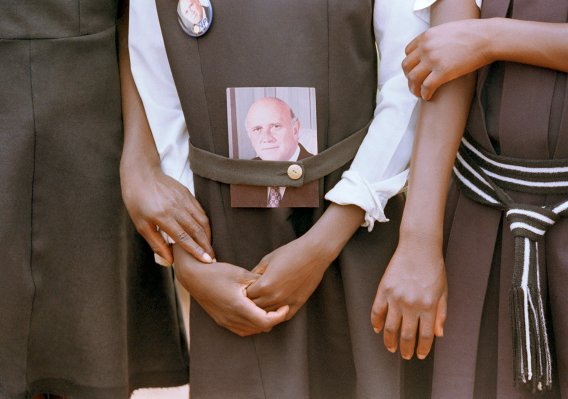 How Nelson Mandela Came to Work with F.W. de Klerk to End Apartheid
Next Up: Editor's Pick