President Joe Biden selected Jerome Powell for a second four-year term as Federal Reserve chair while elevating Governor Lael Brainard to vice chair, keeping consistency at the U.S. central bank as the nation grapples with the fastest inflation in decades and the lingering effects of Covid-19.

The move, announced by the White House on Monday, rewards Powell for helping rescue the U.S. economy from the pandemic and tasks him with protecting that recovery from a surge in consumer prices. A Republican, Powell faces what will likely be a smooth confirmation in the Senate, where he was backed for his first term as chair in an 84-13 vote and whose members he subsequently worked hard to woo.

Brainard would replace Richard Clarida in the vice chair slot and may face opposition from Senate Republicans for her confirmation. She was interviewed by Biden for the chair position and was seen as a strong contender for the separate job of vice chair for supervision, which remains vacant.

Biden plans to announce that nomination along with additional picks for open seats on the Board of Governors beginning in early December, the White House said.

Powell, 68, has enjoyed bipartisan support, including from Treasury Secretary Janet Yellen and other Democrats, although progressive Democrats such as Massachusetts Senator Elizabeth Warren lobbied Biden to choose someone more aligned with them on overseeing banks and battling climate change. Powell also had to answer for an ethics scandal after trading revelations by some senior Fed officials.

Biden’s choice of Powell will also likely win approval from investors by ensuring continuity at the central bank as it begins withdrawing ultra-easy monetary policy amid the challenges of persistent inflation.

Biden, in a written statement, called the economic recovery so far a “testament to the economic agenda I’ve pursued and to the decisive action that the Federal Reserve has taken under Chair Powell and Dr. Brainard to help steer us through the worst downturn in modern American history and put us on the path to recovery.”

Biden added, “I’m confident that Chair Powell and Dr. Brainard’s focus on keeping inflation low, prices stable, and delivering full employment will make our economy stronger than ever before.”

He also singled out what he called their “deep belief that urgent action is needed to address the economic risks posed by climate change, and stay ahead of emerging risks in our financial system.”

Brainard and Powell have similar views on monetary policy, but differ over bank regulation with Brainard opposing at nearly every step Powell’s modest rollbacks of some of the tough curbs imposed on banks after the financial crisis.

Brainard, 59, was appointed a Fed governor in 2014 by President Barack Obama. In 2020, Biden considered picking her as Treasury Secretary, before he picked Janet Yellen.

A graduate of Harvard University, Brainard served in Bill Clinton’s White House as deputy national economic adviser. In 2009, under Obama, she joined the Treasury and became undersecretary for international affairs in 2010.

Powell’s second term is going to be very different from his first. While the economy is rebounding, inflation is running at a three-decade high, Covid-19 cases remain elevated and strained supply chains present big uncertainties.

Some officials are already suggesting the Fed may need to pull back its massive asset-purchase program faster than now planned and Powell will also be presiding over a committee with a number of members who likely want to raise interest rates sooner than he does. 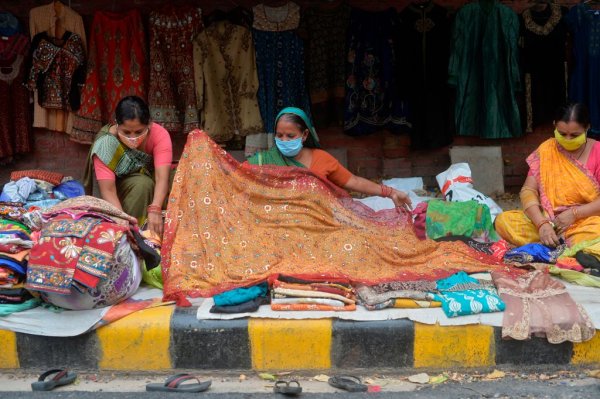 Meet the Women Leading the Global Fight for Workers' Rights in the Informal Economy
Next Up: Editor's Pick