I watched the first four episodes of HBO’s True Detective, ending with last night’s “Who Goes There,” before the series premiered. The advantage of that, obviously, is that seeing several episodes gives a critic a sense of the sweep and the goals of the story better than a single pilot. But especially with a show as visually ambitious as True Detective, a rough-cut advance screener is nothing like the final-cut, HD broadcast version.

So I saw the episode’s climactic, tour-de-force, six-minute tracking shot weeks ago. But also, I didn’t really see it until after HBO aired it last night.

Lengthy tracking shots are obviously impressive–see the legendary example from Goodfellas–but they can also be distracting; once you’re aware what you’re watching, it’s easy to become focused on “How did they do that?” and all the things that could have gone wrong in the shoot. In other words, it can cause you to stop watching TV and start watching the TV-making.

True Detective is obviously, even more than most HBO shows, a series that aims to challenge the movies, from its style to its casting. But this bravura scene doesn’t feel like a gimmick for the sake of being “cinematic.” Rather, the difficulty built into the shooting challenge–the chaos, the frenzy, the feeling that everything could go off the rails–directly served the story in “Who Goes There.”

This was an episode that began in the already-dark reality of True Detective’s Louisiana and took us to something like hell–not just in the seaminess and brutality of the stash-house raid but in Cohle’s return to the drug-using, deep-cover lifestyle that physically and psychologically damaged him. As he cut his deal and snorted biker-blend up his nose to prove his bona fides, the episode shifted into a lurid, Apocalypse Now-like nightmare reality.

That reality is Cohle’s reality, the kind of ugly experience that informed his pessimistic view of human existence, and now we were inside it. The tracking shot, which took us from his entering the project house to his bloody, frenzied escape, tied us to his point-of-view. We ran along a tightrope with him, as he helped a child hide in a bathtub, chanted “thirty seconds” mantra-like while the job dissolved into chaos, scrambled through the project to evade both the outlaws and the cops.

It was one of the most amazing scenes you’re likely to see on TV all year, and yet the episode wasn’t quite done. As Marty peeled off from the crime scene, there was another shift in perspective, an overhead shot that pulled revealed a full-on police assault, a helicopter wheeling into position below us. It was as if we had dived into some murky, surreal deep sea with Cohle, and we were now rising up, up, back to the surface, where finally, we could breathe again. 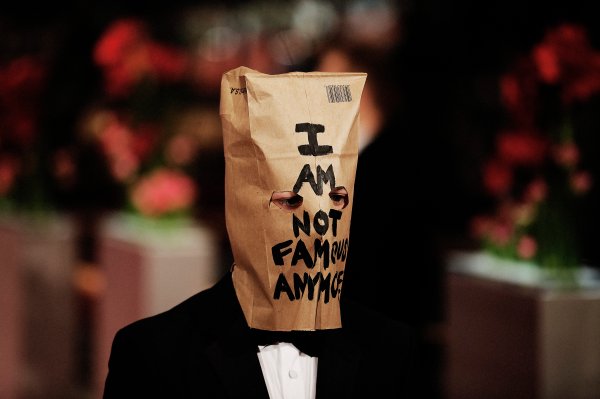 Shia LaBeouf Dons Paper Bag on Head at Premiere
Next Up: Editor's Pick