In Washington, ‘Bipartisan’ Can Mean a Lot of Things

Lest you missed the rollout of the infrastructure package President Joe Biden signed into law yesterday, he used the word “bipartisan” five times in an unusually efficient 11 minutes of remarks.

He noted Democrats and Republicans had worked together to pass the “bipartisan framework.” He said the new “bipartisan law” would modernize ports and airports. And, just in case anyone hadn’t heard him, he hit the point one last time as he got ready to put pen to paper. “Now let me sign this bipartisan bill,” he said.

But when it comes to Washington working together, the bright day on the South Lawn that drew the likes of Republican Sen. Rob Portman and Rep. Don Young is probably an outlier—not a reset—in the deeply divided corridor of power along Pennsylvania Avenue.

Sure, the nation’s new infrastructure law did have some Republican support, and respected GOP legislators helped to write it responsibly. But let’s put that support in context: About the same number of Republicans in the House voted for infrastructure as voted to impeach then-President Donald Trump. In other words, voting across the aisle is not a particularly sustainable posture for them. Like so much else here in Washington, anything that is seen as a victory for Biden is viewed as bad politics for Republicans.

In the House, 13 Republicans supported the $550 billion in new spending on roads, bridges and airports over the next 10 years. Nineteen Republican Senators did the same, including Minority Leader Mitch McConnell. That is 32 of the 283 Republicans with votes in Congress, hardly a show of force or battalion of hugs.

At least for the Senators, the allure of free money for needed repairs was more compelling than the fear of retribution from the right flank, but the risk they took in voting yes is real. Three of those House members and two of those Senators have already announced this is their last term in those chambers, and the far right of the party is already plotting to primary the rest of them. Rep. Marjorie Taylor Greene, whom Republican Leadership booted from all committees over her earlier incendiary rhetoric, tweeted their names and office phone numbers, calling them “traitors.” Others have been only slightly less caustic.

By the time it came time for Biden to sign the legacy-defining legislation yesterday afternoon, just three of its 32 Republican backers joined Biden on stage. By evening, a number of them had posted photos of their White House visit, including five Republican Senators standing with the President and First Lady. Most chose to stay away, though it’s safe to assume they’ll take credit with voters once the new tunnels and bridges start to show up back home.

There aren’t a lot of controversial ideas in the first bite of Biden’s infrastructure agenda. In fact, the new law looks a whole lot like the framework that Trump himself was near delivering until he decided he would no longer cooperate with Speaker Nancy Pelosi until she stopped her fellow Democrats from conducting oversight that eventually led to his first impeachment.

Such a zero-sum view of political power is hardly new. NBC News’ Steve Kornacki aptly chronicled the partisan nature of the 1990s and its tribalism in The Red and the Blue. The obstruction-as-strategy that began under then-Speaker Newt Gingrich mutated with his coaching a decade later. Republicans, just hours after Barack Obama took office in 2009, gathered in downtown D.C. to plot an opposition strategy to say no to everything he proposed and make even his wins look messy. Sen. Mike Enzi, one of the Republican negotiators on Obamacare, admitted that he was never going to get to yes on it and was merely trying to run out the clock. And when Obama got a chance for a third Supreme Court nominee, McConnell simply refused to consider it and claimed history as precedent.

Democrats can be just as partisan as Republicans on big questions like Trump’s border wall, Bush’s plans for Social Security and Ronald Reagan’s nomination of Robert Bork to the Supreme Court. There’s no doubt about that. But they don’t typically say no to popular and broadly sound policies.

Take Washington’s response to the pandemic. Democrats were universally contemptuous of Trump, who had just beat his first impeachment as the reality of this new illness was beginning to take over our lives. He enjoyed a dismal 7% job approval rating among Democrats, according to Gallup.

Despite that, not one Democrat voted against Trump’s first COVID-19 relief bill. The same was true for Trump’s second relief bill, too. The third pandemic package drew three nos from Democrats in the House and none in the Senate. The fourth won unanimous support from all House Democrats except Rep. Alexandria Ocasio-Cortez and passed by voice vote in the Senate. And the fifth, which included the year-end spending package, drew just two no votes from Democratic Reps. Tulsi Gabbard and Rashida Tlaib and none in the Senate.

When you get to the other side of Biden’s Jan. 20 Inauguration, things start looking a lot different. Biden’s pandemic package won exactly zero Republican yay votes in the House or Senate. His upcoming second bite of infrastructure—which includes dramatic social spending that is less popular than bridges but still a winner when partisan impulses are checked—is all but certain to meet the same lonely fate.

So while my Instagram timeline yesterday had plenty of smiling selfies taken on Republican staffers’ phones, cross-aisle cooperation isn’t the new normal. In fact, the Republican cheers for Biden’s success are probably notable not for the bipartisanship they suggest, but for their sheer novelty in the Biden era. When it gets down to it, not all bipartisanship is equal. The five Trump-era COVID-19 bills, totaling $3.8 trillion, had exactly six Democratic nays on final passage. That’s what overwhelming bipartisanship looks like. 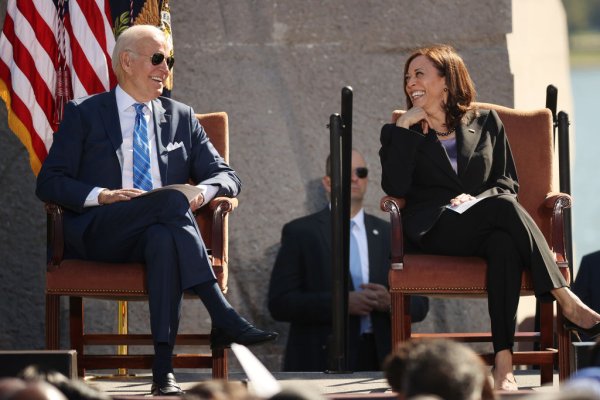 Biden Isn't Making Things Easy for Two of His Potential Successors
Next Up: Editor's Pick