In the Standoff Between Belarus and Europe, Migrants Are Being Used as Human Weapons

Migrants gather on the Belarusian-Polish border near Kuznica on Nov. 15
Oksana Manchuk—BelTA/AFP/Getty Images
By Madeline Roache

Nights are a particularly dangerous time for migrants stranded without shelter in the forest that lies on the border between Poland and Belarus.

Families who have made the treacherous journey from war-torn states including Afghanistan, Iraq and Yemen are forced to wrap themselves in damp sleeping bags and huddle together for warmth as temperatures plummet. Polish volunteers and activists deliver soup and clothes in the dark, avoiding using flashlights so as not to attract the attention of Polish border guards, who they say will force migrants back across the border if found.

Some migrants have not eaten for days by the time the volunteers reach them. “I have never seen hunger like this in my life. People are starving and they have nothing,” says Anna Alboth, an activist and member of Grupa Granica, a Polish network of 14 NGOs assisting migrants. “There should be systematic help from humanitarian organizations that know how to do it,” she says.

Migrants warm themselves at the Belarusian-Polish border in the Grodno region, Belarus, on Nov. 10. Hundreds of refugees who want to obtain asylum in the European Union have been trapped in low temperatures at the border.
Stringer/EPA-EFE/Shutterstock

These migrants have become both the casualties and the unwilling weapons of a new type of conflict raging between the European Union and Belarus. The E.U. says Belarus has encouraged migrants to illegally cross into member states Poland, Lithuania and Latvia, in revenge for sanctions Brussels imposed on Minsk last year. Belarus has denied the accusation and said the E.U. was trying to divert attention from its own domestic problems. Hanging in the balance are the lives of thousands of migrants trapped in the forest in freezing temperatures, urged by Belarusian border guards to cross into Poland, then denied entry to the E.U. country.

The stand-off between Poland, the Baltic states and Belarus is escalating into a geopolitical conflict that could threaten the security of Europe. Belarusian President Alexander Lukashenko has threatened to cut gas supplies to Europe if the E.U. imposes more sanctions on Minsk over disputed elections that gave Lukashenko a sixth term in power. Ukraine said it plans to send 8,500 troops to its border with Belarus, fearing it could become the next frontier in the migrant crisis. German Chancellor Angela Merkel has appealed to Russian President Vladimir Putin, Lukashenko’s main ally and sponsor, to intervene.

“This situation is about the stability of the E.U. as a whole. Putin and Lukashenko intend to test the resilience of the E.U. and NATO,” Pawel Jablonski, Poland’s Deputy Foreign Minister tells TIME.

A great power conflict with thousands of lives at stake

The crisis, which began in the summer, has sharply escalated in the past month. Poland has recorded 24,500 attempted crossings from Belarus this year, with more than half happening in October, compared to only 120 attempts last year. E.U. members Latvia and Lithuania have also seen a sharp rise in attempted crossing via Minsk in recent months. Most migrants have been lured by relaxed visa rules to Belarus and false adverts from travel agencies in Iraq, Lebanon and Turkey promising easy passage to the E.U., human rights activists say.

Reports of Belarusian border guards beating migrants and forcing them to cross the border, including by damaging the razor wire fence that Poland put up in August, are common, human rights activists say.

Poland and the E.U. say Belarus has engineered a migrant surge at the border to pressure the bloc into lifting sanctions imposed on Minsk and to punish E.U. states for hosting exiled opposition figures. Lukashenko has denied the accusation. In August, he told journalists in Minsk, “We are not threatening anyone. You have put us in such circumstances that we are forced to react and we are reacting.”

Poland’s Prime Minister Mateusz Morawiecki recently said Putin is the “mastermind” behind the crisis, something the Kremlin has denied. But in a clear sign of support, Moscow, which helped the Lukashenko regime survive a wave of opposition protests last year through financial and political backing, insisted Belarusian guards were treating migrants “very responsibly” and offered on Nov. 15 to play the role of “mediator” in discussions to resolve the crisis. “There is undoubtedly Russian connivance and undeclared support,” says Samantha de Bendern, an Associate Fellow at London-based think-tank Chatham House.

Jablonski, Poland’s Deputy Foreign Minister, says that the Polish government is expecting an increase in numbers of arrivals to its border. He says he “cannot exclude” the possibility of further escalation. “We are prepared to use any means necessary to defend ourselves but we want to avoid any escalation,” he added. On Nov.16, Polish forces turned water cannons on migrants assembled at border gates.

At the border between Poland and Belarus, migrants wander the forest in search of help wearing only torn socks on their feet, having destroyed their shoes trudging through the swamps, says Alboth. Trapped between border guard push backs and violence, many migrants have given up trying to cross the border. “They are hiding in the forest like animals,” says Alboth. Grupa Granica says they were in contact with about 1,000 migrants last week alone.

There are no independent records on the number of migrants who have been stranded or died trying to cross into Poland. An emergency act passed by Warsaw in early September has barred all non-residents, including aid workers, medics and journalists from entering the two-mile deep strip of forest between the countries. Polish officials have reported that nine people have been found dead in the forest, but Grupa Granica says the real death toll is much higher.

Jablonski says there is no one stranded on the Polish side. “If we identify that someone is legally on our territory, we transport them to detention centers and process them according to Polish law,” he says. But Alboth says that “almost nobody”is taken to a detention center. “It only happens if we activists make a big noise around a case, invite the international media and apply to the European Court,” she says.

Local non-governmental organizations (NGOs) and grass-root activists are helping the migrants who have managed to escape the zone, having crossed the barbed wire fence. Alboth is one of dozens volunteers based along the border who have been providing migrants with food, water, clothes and power banks to charge their phones. She says she has helped children as young as a few months old. “All of the migrants we’ve met this past week have signs of hypothermia,” she says. “It’s heart-breaking.”

Anna Alboth left, with refugee women from Congo who had been hiding in the forest for 4 days near the Polish-Belarusian border. She is giving food, dry clothes and is warming their feet
Courtesy Thomas Alboth

How Europe can de-escalate the situation

The E.U. has attempted to stem the number of migrants traveling to its eastern border, having reached a deal with Turkish authorities on Nov. 12 to stop Belarusian state-owned airline Belavia from allowing citizens of Iraq, Syria and Yemen to board flights from Turkey to Belarus. Iraqi Airways has also said it will halt flights to Minsk.

On Nov. 15 the E.U. agreed on a new round of sanctions against Belarus. Josep Borrell, the bloc’s foreign policy chief, said they would target “everyone involved” in the illegal push of migrants.. A list of about 30 people and entities that will be subject to asset freezes and travel bans is expected to be finalized in the coming weeks.

But some political analysts say that the new E.U. sanctions do not go far enough. They say they should be stronger and target Russia for its tacit involvement. Russia is currently not among the countries the bloc is considering sanctioning, Peter Stano, a senior E.U. official told a Russian radio station, Ekho Moskvy, on Nov. 11.

Piotr Buras, head of the Warsaw office at European Council for Foreign Relations think-tank, says sanctions that target Belarus’s trade with the E.U. would hit Lukashenko “in a much more painful way”. The E.U. is Belarus’ second largest trading partner, amounting to $12 billion in 2020. “This is an untapped potential and would require courageous steps from the E.U.,” he says

Sanctions, even if they are tough, cannot change Belarus’s behaviour while Lukashenko enjoys the support of Russia, says Artyom Shraibman, a political analyst at the Carnegie Moscow Center think-tank living in exile in Kiev, Ukraine. “The E.U. can make it increasingly costly and risky for Moscow to support Lukashenko.” It could do so by threatening to impose sanctions on Russia for backing Lukashenko and for helping Belarusian state companies to circumvent sanctions, he says.

Jablonski says that the E.U. should also “be prepared” to sanction Russian airlines for their role in facilitating the migrant flows. According to him, a growing number of people are now traveling from Middle Eastern countries to Minsk through Moscow. Russia’s flagship airline Aeroflot, has denied helping migrants and refugees travel to Belarus.

Read more: How a Belarusian Teacher and Stay-at-Home Mom Came to Lead a National Revolt

The risk of Lukashenko making good on his threat to cut gas supplies in Europe must also weigh on the minds of E.U. decision-makers — though few believe this is likely to happen. Belarusian opposition leader Sviatlana Tsikhanouskaya has dismissed it as a “bluff”, saying the move would cause “more damage to him, to Belarus, than to the European Union.” Experts say that, since Russia owns the gas and would face a huge economic blow from such action, it is unlikely Belarus would follow through on the threat.

The Kremlin was quick to distance itself from Lukashenko’s comment, with Dmitry Peskov, Russian foreign minister, saying on Nov. 12 that the Belarusian president had not consulted with Moscow and that Russia does not want to see any disruption to gas supplies.

While officials have focused on measures to prevent new arrivals to Poland, less appears to have been done to address the deteriorating humanitarian disaster on its border. Chatham House’s De Bendern and human rights activists say that Poland must loosen the restrictions on the so-called emergency zone, where migrants can currently only hope to receive aid from local residents and activists.

“The E.U. cannot let people starve and freeze at the border,” says de Bendern. “The only positive outcome is if Poland allows E.U. border guards, journalists and NGOs into the border region, and manages to organize a very contained influx of migrants, where they’re able to stay in the border region,” she adds.

Polish NGOs say their repeated requests to enter the so-called emergency zone to help migrants has been rejected by the government. Poland’s prime minister Morawiecki said it offered to provide humanitarian aid for migrants stranded on the Belarusian side of the border, but that this was rejected by Minsk.

Unless Poland takes these steps, de Bendern says, it is only “feeding” into rhetoric from Belarus and Russia accusing the E.U. of hypocrisy. As winter approaches, the need to act is becoming more urgent each day. “There is so much tiredness, frustration and helplessness,” says Alboth, who says this is the worst situation she has experienced in a decade of working in human rights. “We can’t really resolve it. We’re giving people all we can but then we have to leave them.”

The original version of this story misstated the condition of migrants on the Belarus-Poland border. They had signs of hypothermia, not hyperthermia. 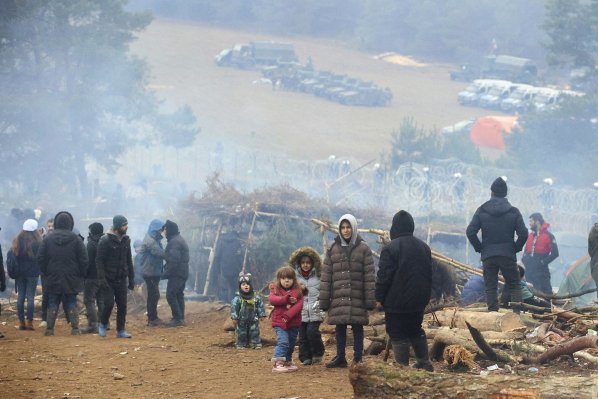