What Early Drafts of Slaughterhouse-Five Reveal About Kurt Vonnegut's Struggles

Author Kurt Vonnegut, Jr., 1970, after the publication of Slaughterhouse-Five
Jack Mitchell-Getty Images
Ideas
By Tom Roston
Roston is the author of The Writer’s Crusade: Kurt Vonnegut and the Many Lives of Slaughterhouse-Five. He has worked atThe Nation and Vanity Fair, and was a senior editor at Premiere for a decade. His work has appeared in The New York Times, Fast Company, New York Magazine, Food Republic, Salon, and more.

In the first chapter of Slaughterhouse-Five, Kurt Vonnegut’s 1969 anti-war masterpiece about a hapless American soldier who becomes “unstuck in time,” the author indicates that he wrote more than five thousand pages by 1965. But he threw all of those pages out, before arriving at his final draft. At his archive in the Lilly library in Indiana, there are at least five hundred pages that appear to come from Slaughterhouse-Five drafts. In tracing Vonnegut’s 23-year crusade to write his most famous novel, I sought to pair his literary struggle with his personal development from his experiences as a soldier during World War II.

It is difficult to determine the sequence of these early versions, but, as a whole, they demonstrate Vonnegut’s creative progress toward writing about his experience in Dresden (where he was a prisoner of war after being captured by German forces during the Battle of the Bulge), a subject he, for the first time, put in the first person in one of his novels when he added an introduction for the 1966 reissue of Mother Night. “135,000 Hansels and Gretels had been baked like gingerbread men,” he writes darkly of the firebombing. (Vonnegut never revised his reliance on disgraced historian David Irving’s discredited tally despite the number being corrected to approximately 25,000 killed by more authoritative sources. “Does it matter?” That’s what Vonnegut told Marc Leeds, author of The Vonnegut Encyclopedia.) “If I had been born in Germany, I suppose I would have been a Nazi, bopping Jews and gypsies and Poles around, leaving boots sticking out of snowbanks, warming myself with my secretly virtuous insides. So it goes.” This is also the first time he used the famous tagline he would go on to repeat throughout Slaughterhouse-Five.

The introduction addresses Mother Night’s general subject of ambiguity and its tone of absurdity, but the author’s first-person reflections on his connection to the material is incongruous with the fictional tale that follows. Nowhere else does the novel make reference to the author’s military experience, and by doing so it effectively reframes the story. Vonnegut’s upcoming Dresden novel was clearly gestating. And it was the beginning of Vonnegut’s signature approach to anchoring his future novels with introductions where Vonnegut, the first-person author, speaks to the reader.

At the Lilly Library, there are two early Slaughterhouse attempts that are dramatically different from the final book. One, with the title “Magic Fingers,” is about a character who experienced the Dresden bombing, who visits a friend named Bernard O’Hare during the World’s Fair and is fixated on the mechanical beds named in the title. There is another version that runs over 130 pages that has little related to the plotline of Slaughterhouse but centers on a character named Billy Pilgrim who is a Pontiac car salesman in the Midwest (glimmers of 1973’s Breakfast of Champions can be found here), who witnessed the bombing of Dresden. The story, which tells of Pilgrim’s relationship with a gay lodger in his home who sells washing machines, doesn’t have much dramatic pull.

“I was a hack. I’d write anything to make money, you know,” Vonnegut later wrote in A Man Without a Country. “And what the hell, I’d seen this thing, I’d been through it, and so I was going to write a hack book about Dresden.” Vonnegut found much glee in disparaging himself, especially in print.

“I tried,” he added. “But I just couldn’t get it right. I kept writing crap.”

He’s not kidding. I keep coming back to those discarded drafts. He really did write some toilet paper–worthy material. But no judgments! I need you with me on this. I am going to trust that you and I can maintain two potentially inconsistent thought processes in our big brains—appreciate Slaughterhouse-Five as it is written and also ferret around how Vonnegut wrote it—without suffering from cognitive dissonance. Or losing a love for the book. Or respect for its creator. He may have been uniquely gifted but it took so much work to make his writing appear almost childlike and off-the-cuff. The evidence is in all those rough drafts. Vonnegut hammered away at making accessibility an art form.

Author and Vonnegut fanboy Steve Almond has worried that it may be “dirty pool to go mucking through his early efforts,” but Almond does it anyway in his long essay, “Everything was Beautiful and Nothing Hurt.” I do, too. We want to understand the book and the man! Maybe if we do, we can understand ourselves, right? Almond also writes, “Writers evolve simply because they tire of their own mistakes.” I want to see that evolution.

Even as late as October 1966, Vonnegut was still playing with whether or not he should write the story as something less condemning of war and more motivated by financial gain. That month, he admitted in a letter to his editor and friend Knox Burger that he had met with a literary movie agent in Los Angeles who inspired him to write a role for actor Kirk Douglas because a movie adaptation would need to have a strong central character. But it didn’t work, he wrote, half ruefully, “because the war I saw wasn’t really that way. I am stuck with the fine arts, I guess. Maybe I’ll get the Nobel Peace Prize, which is 60 G’s.”

There are dozens of Slaughterhouse-Five versions that appear to be much closer to the final book—with no less than eighteen different openings. The lead character is often named Harold Moon or David McSwan, and sometimes Billy Pilgrim. In some, a different character, the mother of a dead POW, challenges the narrator about glorifying war and refers to soldiers as “babies.”

There are also versions that include an O’Hare son who is going to fight in Vietnam and one where Billy Pilgrim is gay. He constantly wavers on calling the first section a “preface” or “chapter one.”

But, finally, on June 10, 1968, less than ten months after he returned from a research visit to Dresden, Vonnegut turned in the final draft of Slaughterhouse-Five. Weeks before, he had mocked his effort when he wrote in a letter to Scholes, “It sure has been hard. It isn’t very long. From now on I am going to follow familiar models and make a lot of dough.”

Vonnegut’s book editor Seymour Lawrence was known to have had a very light touch as an editor. Author Jerome Klinkowitz, who has written several books about Vonnegut, believes that Lawrence may well not have changed as much as a semicolon of the manuscript. With the publication date set for March 1969, Vonnegut’s popularity was cresting. By that date, with the help of Lawrence, more than 200,000 mass-market paperback copies of The Sirens of Titan and 150,000 Cat’s Cradle paperbacks had been sold. And, that same month, hundreds of American soldiers died fighting a North Vietnamese offensive in the largest loss of American lives of the war so far. It was an opportune time for an emerging writer with a youthful following to be coming out with an anti-war book.

Much later, explaining how he was finally able to complete his Dresden novel after more than two decades, Vonnegut wrote, “I think the Vietnam War freed me and other writers, because it made our leadership and our motives seem so scruffy and essentially stupid. We could finally talk about something bad that we did to the worst people imaginable, the Nazis. And what I saw, what I had to report, made war look so ugly. You know, the truth can be really powerful stuff.”

And yet, Vonnegut adamantly refuted the suggestion that his wartime experiences had an impact on him personally. “If I told him he had PTSD, he’d tell me to go soak my head,” says his son Mark Vonnegut.

Vonnegut rarely spoke or wrote directly about what he actually felt during the war. The closest we come to hearing from him may be in the letter written by his uncle Alex in 1945, when the young Vonnegut tearfully exclaimed, “The sons of bitches! The sons of bitches!” after telling his family the story of his fellow American POW Michael Palaia, whom he eventually based the character Edgar Derby on.

Thoughtful. Talk about an understatement. But just as this suggests he is admitting something intimately, painfully personal, Vonnegut adds, “It . . . made . . . you think about . . . death. I have said, too, that I would not have missed it for the world. It was a hell of an adventure. You know, as long as you [are] going to see something, see something really thought provoking.”

Vonnegut was never one to accept the boxes that others tried to put him in. And I believe he didn’t want to be pinned down as another writer traumatized by war. “I suppose you’d think so, because that’s the cliché,” he told Playboy in 1973. “The importance of Dresden in my life has been considerably exaggerated because my book about it became a bestseller. If the book hadn’t been a bestseller, it would seem like a very minor experience in my life. And I don’t think peoples’ lives are changed by short term events like that. Dresden was astonishing, but experiences can be astonishing without changing you.”

Calling what he witnessed during the war a “minor experience” seems like Vonnegut doth protest too much. And there is plenty of clinical evidence that a “short term” experience, if it is harrowing enough, can in fact forever change a person. But Vonnegut’s position remained consistent. He wrote in 1981’s Palm Sunday: “Being present at the destruction of Dresden has affected my character far less than the death of my mother, the adopting of my sister’s children, the sudden realization that those children and my own were no longer dependent on me, the breakup of my marriage, and so on.”

Adapted from the new book The Writer’s Crusade: Kurt Vonnegut and the Many Lives of Slaughterhouse-Five, published by Abrams Press. 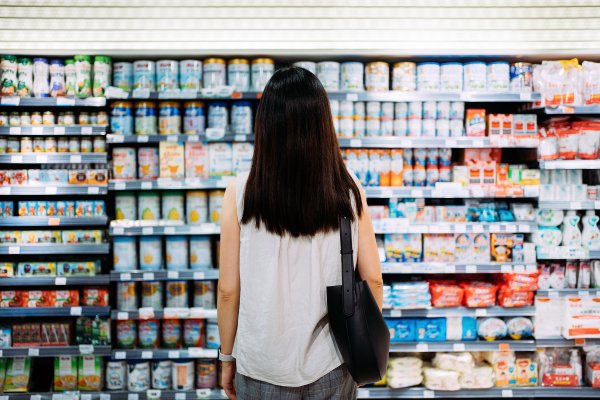 We Only Think We're Making Our Own Choices. It Matters How Options Are Framed
Next Up: Editor's Pick