The Work of Critical Race Theory Falls on Employers Now

Getty Images
Ideas
By S. Mitra Kalita
Kalita is co-founder and CEO of URL Media, a network of Black and Brown news and information outlets that share content, revenue, and distribution. She also is publisher of Epicenter-NYC, a community journalism initiative in Queens, and columnist for TIME and Charter. A veteran journalist, Kalita most recently worked at CNN, and is the author of two books. Follow her on Twitter @mitrakalita.

After the death of George Floyd last year, there seemed at least a desire for large-scale change. In June 2020, JPMorgan Chase CEO Jamie Dimon kneeled in solidarity with employees and proclaimed: “It’s long past time that society addresses racial inequities in a more tangible, meaningful way.” A few months later, the company announced a $30 billion commitment to advancing racial equality and economic opportunity, joining the ranks of PNC, Bank of America, and others with similar initiatives.

But despite the noise companies have made over the past year, the workplace is hardly in a racial reckoning—if anything, the pandemic has exacerbated workplace inequalities. And last week’s election results cast some doubt on how those efforts toward racial equity have landed with white America. From the governor’s seat in Virginia to the school board in Mesa County, Colorado, one idea has surfaced repeatedly as a deciding issue: critical race theory, or CRT. More specifically, opposition to teaching CRT in schools has, for many candidates, been a ticket to electoral victory.

Which means that for all the private-sector employers with newly declared commitments to diversity, this moment is an inflection point: a chance to back up their promises by stepping in where the educational system is falling short.

The term “critical race theory” has become something of a catch-all during its time in the national spotlight: Often, purported opposition to CRT is used to indict a spate of other diversity initiatives—from a more diverse reading list in AP English to Diwali advertising by Target—and to reject acknowledgement of systemic racism as an inextricable part of U.S. history.

CRT does have a specific meaning that frequently gets muddled. Developed in the 1970s as an academic framework, it highlights the intersections between race and our legal systems. It’s since grown into a movement to eradicate white supremacy within institutions, as well as a political bogeyman to stoke white fears. While it’s been discussed mostly in a classroom context, much of the current-day opposition to critical race theory is deeply connected to the workplace. In September 2020, President Trump issued an executive order (since rescinded by President Biden) saying any diversity training that included “divisive concepts” or “race and sex scapegoating” would not qualify for federal funding.

But employers have spent the last 18 months focused on diversity, equity, and inclusion with an energy, at least according to some experts, not seen since the Civil Rights Movement. They’ve hired chief diversity officers, increased recruiting of underrepresented minorities, launched and funded more employee resource groups, and have held numerous diversity seminars. Amid the controversy over what CRT is and isn’t, they now walk a tightrope to navigate this moment without undoing their progress.

“Many of the parents who support the removal of the CRT concepts from the classroom are in the workplace and don’t want to hear it there either,” says Shindale Seale, CEO of the cultural equity and diversity firm SEADE Coaching and Consulting. With the current backlash to CRT reaching a fever pitch, “We may see a strong push in the workplace to limit diversity, equity, and inclusion (DEI) training or revamp it significantly so these groups are not uncomfortable having to face the truth of American history.”

In some ways, the impact on the workplace already has been chilling.

“There are inequities happening and there are people who don’t have the same opportunities—but we can’t have that conversation about why they don’t have the same opportunities,” says Seale, also the DEI program chair at the University of California Santa Cruz’s Silicon Valley Extension. When companies are reluctant to address critical race theory, “We can’t discuss historical barriers to gender pay parity, we can’t revise policies to properly position people of color to seek redress for racial discrimination.”

Indeed, in the runup to the recent election, workplace-diversity experts were peppered with questions about CRT. Three weeks ago, Kimberly Lee Minor devoted her regular meeting with a corporate retailer’s executive leadership to critical race theory. Lee Minor, the founder and CEO of Bumbershoot, a DEI and cultural transformation consultancy, asked attendees in the breakout session: “What scares you about CRT?”

The Ohio-based Lee Minor explained that she wanted to offer more perspectives of CRT itself, she recalls, and not have that understanding “depend on which channel you watch.” The debate about the theory and media depictions, whether Fox News or Twitter, she told the room, has been spilling over into the workplace for months.

This isn’t the first time companies have had to pick up the slack for schools and governments unwilling to touch issues of race. The business imperative for diversity has been made clear to them over and over, both in terms of corporate leadership and in the strategic thinking needed to compete.

Consider an amicus brief General Motors filed to oppose the ban on affirmative action at the university level: “In General Motors’ experience, only a well-educated, diverse work force, comprising people who have learned to work productively and creatively with individuals from a multitude of races and ethnic, religious, and cultural backgrounds, can maintain America’s competitiveness in the increasingly diverse and interconnected world economy,” the company wrote.

We are sliding ever backward, with evidence that fears of CRT not only win elections but also allow employers to preserve the status quo. In Mesa County, Colorado, the school board’s desire to hire a director of equity and inclusion was hotly contested. One reason: “There are code words in the job description for promoting CRT,” a pastor told the Colorado Times Recorder.

It’s not that covert, says Seale: She and many others in the DEI space say critical race theory is embedded in their work like many other tools and frameworks, from the study of economics to management philosophy for navigating different personality types.

“There’s power in it standing as a beacon of truth in its authenticity,” she says. “Especially since we know that it’s not ‘CRT’ that’s under attack, it’s historical truth-telling that’s the real victim.”

What about white people?

Albeit a dwindling number, white people still make up the majority (more than 60%) of the U.S. population. What’s become clear after last week is that a large number of them are feeling alienated. What does that mean for the guy you work with, the one you are seated next to in diversity training mandated by your employer?

One post-election lesson, says Lee Minor, is the language used to include white colleagues might need some revamping. “We need everybody to move forward,” she said. “So when we say, ‘We need white people to get on board,’ that alienates white people. They think, ‘Oh, I thought I was on board.’

“We need to change the message to: ‘This is the whole piece, we all live here, and everyone needs to be committed to making sure we have an inclusive community, process, and pipeline.’”

How to get this right in the new world (dis)order

I asked Seale about how employers can play a role in ensuring workplaces are harmonious in ways that school systems might be unwilling or unable to. She suggests the following:

The first step is to understand how the law has “impacted our workforce and significantly contributed to the inequities we have today,” Seale says. As an example, she points to the GI Bill, which guaranteed housing for World War II veterans, but also allowed banks to discriminate in deciding who got those loans. “The effects of this are still being felt today in education, such as refinancing homes purchased then to help pay for white kids to go to college,” she says.

“The expectation that everyone entering the workplace will have had similar experiences and dispositions is an inequity in itself. These expectations are housed in ignorance of history and culture. This is why so many people of color are refusing to return to the workplace.”

Get loud about intentions.

“Leaders will have to be vocal. They have to be visibly present in charting this course to mitigate the negative effects of CRT backlash. Workers, regardless of how they personally feel about it, will follow suit–or they will leave. This will require organizational courage and strong, committed leadership.”

Know that diversity is a business imperative.

Companies “have to be strategic and growth-oriented,” Seale says, and part of that is “diversifying their ranks at all levels, and creating sustainable and equitable standards to maintain the diverse workforce and appease their diverse markets.”

For many companies, serving these new and changing markets is a matter of survival that starts with internal cultural change. Whether they rise to the occasion remains to be seen.

Correction: The original version of this story misstated the size of JP Morgan Chase’s 2020 commitment to advancing racial equality and economic opportunity. It was $30 billion. 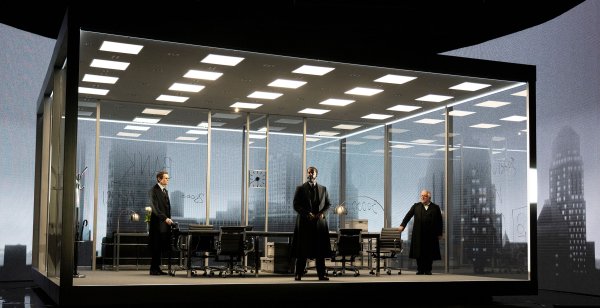 Lessons for This Moment in Business From a Hit Broadway Show
Next Up: Editor's Pick