Counting Your Carbon Footprint One Meal At a Time

Activists from Animal Rebellion scaled the outside of the building of the Department for Environment, Food and Rural Affairs and dropped a banner calling on the U.K. Government to invest in transition to a plant-based food system in the run-up to the COP26, on October 26, 2021 in London, England.
Wiktor Szymanowicz—Barcroft Media/Getty Images
By Aryn Baker/Glasgow

At the COP26 conference this year, there’s a lot of grumbling among activists that official venues are serving meat, even if it’s locally-sourced meat. Animal agriculture has an outsized impact on global warming—up to 14.5% of annual global CO2 emissions, depending on which metrics you include. But here in Glasgow, a serving of meat also comes with a lesson in carbon footprint economics.

Attendees here at COP26 are now informed of the carbon impact of their meals as they peruse the menus. At one restaurant, I was offered a choice between the traditional Scottish meal of haggis, neeps and tatties (stuffed, baked sheep stomach, served with turnips and potatoes); fish and chips; a pearl barley and root vegetable hot pot; or Scotch beef ramen with sustainably sourced local seaweed. I was tempted by the haggis (3.4 kg of CO2), because I’ve never tried it before, but the large carbon footprint made me pause. Was my curiosity worth the extra 3.3 kg of CO2 the haggis cost, compared to the hotpot’s 0.1 kg? Overall, the food we eat accounts for nearly a quarter of global greenhouse gas emissions. The online menu helpfully informed me that according to the World Wildlife Federation, we need to get the carbon footprint of our individual meals down to 0.5 kg CO2 on average in order to reach the Paris Agreement goal of limiting warming to 1.5°C above pre-industrial levels.

Read More: The Cow That Could Feed the Planet

The carbon counts are provided by Klimato, a Swedish start-up that analyzes the carbon footprint of food items so that any foodservice facility—be it a restaurant, a catering provider, the local food truck or a large corporate canteen—can display the climate impact of their food offerings. Making climate-conscious choices when figuring out what to have for dinner isn’t particularly difficult or onerous, says Anton Unger, Klimato’s CEO & co-founder. The problem is that most people have no idea what the carbon footprint of their meal is to begin with, so how can they make an informed decision?

Klimato uses a life-cycle analysis that looks at CO2 emissions from both production and distribution on an ingredient-by-ingredient basis to come up with a final emissions total for a meal. And while Klimato only works with the food industry, Unger says that carbon-emission labelling would work with most products. “Being aware of the climate impact of any consumer action, be it ordering a beef burger or buying a pair of jeans, will help raise awareness and accountability for our own actions and the direct relationship between what I buy/eat/wear and the impact this has on the climate.”

While the carbon count certainly engendered conversation at COP dining venues, it’s not clear whether or not carbon labels would work in the wider world. A newly released survey of people living in 10 countries including the U.S., the U.K., France and Germany observed that a “widespread awareness of the importance of the climate crisis has yet to be coupled with a proportionate willingness to act.” Only 18% of respondents were willing to reduce their meat consumption, even though the vast majority recognized climate change as a threat to themselves and the planet.

In part, that could be because it’s very hard to understand agriculture’s outsize emissions impact within the framework of personal choice. Consumers already understand that taking public transport is better for the environment than driving. But food has a lot more variables: how do you weigh the carbon reductions of locally sourced meat against imported vegetables? By providing a net carbon value, Klimato and other companies like them can help climate conscious consumers make better choices.

Metrics alone don’t decide what we will eat. A variety of factors, from cost to mood to levels of hunger and even the people you are eating with, inform the decision-making process. Knowing the full carbon impact of a grocery-store item or restaurant meal could factor in as well, as long as consumers are educated, says Grant Reid, CEO of the Mars food conglomerate, which just announced its own commitment to reach net-zero carbon emissions across its global candy, snacks and pet-food empire. Beyond the confines of the COP meeting walls, consumer awareness of the climate impact of their food choices is at an early stage, he says. “There’s a much bigger consumer challenge than just popping [a carbon footprint] on the label. These labels are a good experiment, they are good steps in the right direction. But it’s not sufficient.”

Read More: How China Could Change the World by Taking Meat Off the Menu

If carbon footprint consciousness isn’t high on the list of deciding factors, it doesn’t matter what a label says. Another real time experiment could come by the end of next year, when the iconic Mars Bar supply chain goes totally carbon neutral, from cocoa plantation to shop shelves. Will customers care? Only if they know what is at stake, says Reid.

For my lunch today, I tried the haggis. I was in Scotland after all. It was a little disappointing, though, and I’m not sure I would be willing to expend my entire daily food carbon allowance on another version of meatloaf. Knowing that my culinary adventure was responsible for an extra 3 kg of carbon emissions has made me more conscious about everything else I’m eating while I’m here. For dinner I think I’ll opt for the mushroom risotto (0.4 kg), and that vegetarian sausage roll (0.1 kg) for breakfast doesn’t look so bad. Sometimes awareness of your impact is all it takes. Sometimes a target helps.

And for now, at least Klimato isn’t filling me with any guilt by telling me the carbon footprint of a fine Scotch. 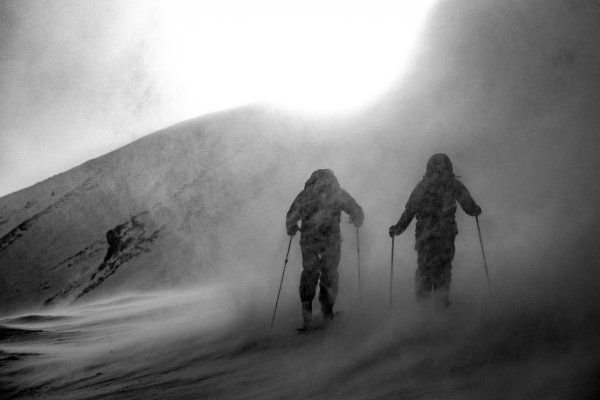 I Traveled the World to Witness the End of Winter
Next Up: Editor's Pick