Rise of the Robots Speeds Up in Pandemic With U.S. Labor Scarce

American workers are hoping that the tight pandemic labor market will translate into better pay. It might just mean robots take their jobs instead.
Labor shortages and rising wages are pushing U.S. business to invest in automation. A recent Federal Reserve survey of chief financial officers found that at firms with difficulty hiring, one-third are implementing or exploring automation to replace workers. In earnings calls over the past month, executives from a range of businesses confirmed the trend.

Domino’s Pizza Inc. is “putting in place equipment and technology that reduce the amount of labor that is required to produce our dough balls,” said Chief Executive Officer Ritch Allison.

Mark Coffey, a group vice president at Hormel Foods Corp., said the maker of Spam spread and Skippy peanut butter is “ramping up our investments in automation” because of the “tight labor supply.”

The mechanizing of mundane tasks has been underway for generations. It’s made remarkable progress in the past decade: The number of industrial robots installed in the world’s factories more than doubled in that time, to about 3 million. Automation has been spreading into service businesses too.

The U.S. has lagged behind other economies, especially Asian ones, but the pandemic might trigger some catching up. With some 10.4 million open positions as of August, and record numbers of Americans quitting their jobs, the difficulty of finding staff is adding new incentives.

Ametek Inc. makes automation equipment for industrial firms, like motion trackers that are used from steel and lumber mills to packaging systems. Chief Executive Officer David A. Zapico says that part of the company is “firing on all cylinders.” That’s because “people want to remove labor from the processes,” he said on an earnings call. “In some places, you can’t hire labor.”

Unions have long seen automation as a threat. At U.S. ports, which lag their global peers in technology and are currently at the center of a major supply-chain crisis, the International Longshoremen’s Association has vowed to fight it.

Companies that say they want to automate “have one goal in mind: to eliminate your job, and put more money in their pockets,” ILA President Harold Daggett said in a video message to a June conference. “We’re going to fight this for 100 years.”

Some economists have warned that automation could make America’s income and wealth gaps worse.

“If it continues, labor demand will grow slowly, inequality will increase, and the prospects for many low-education workers will not be very good,” says Daron Acemoglu, a professor at the Massachusetts Institute of Technology, who testified Wednesday at a Senate hearing on the issue.

That’s not an inevitable outcome, Acemoglu says: Scientific knowhow could be used “to develop technologies that are more complementary to workers.” But, with research largely dominated by a handful of giant firms that spend the most money on it, “this is not the direction the technology is going currently.”

Knightscope makes security robots that look a bit like R2-D2 from Star Wars, and can patrol sites such as factory perimeters. The company says it’s attracting new clients who are having trouble hiring workers to keep watch. Its robots cost from $3.50 to $7.50 an hour, according to Chief Client Officer Stacy Stephens, and can be installed a month after signing a contract.

One new customer is the Los Angeles International Airport, one of the busiest in the U.S. Soon, Knightscope robots will be monitoring some of its parking lots.

They are “supplementing what we have in place and are not replacing any human services,” said Heath Montgomery, the airport’s director of public relations. “It’s another way we are providing exceptional guest experiences.” 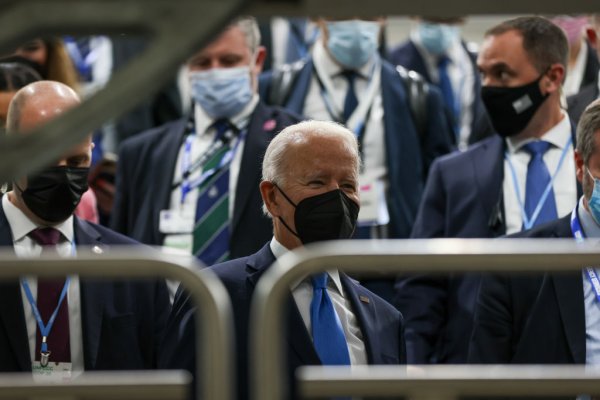 Biden Aide Tests Positive for COVID-19 After COP26 Summit
Next Up: Editor's Pick