The General Electric plant in Lynn, MA is pictured on Feb. 10, 1970.
Photo by Dan Sheehan/The Boston Globe via Getty Images
By Abby Vesoulis

When Sam Bansfield first started working as a material handler at General Electric’s Lynn, Massachusetts plant in 2012, she remembers the noise—the loud clanking of her coworkers in the piece-making wing of the jet engine factory.

Nowadays, she says, the place is painfully quiet. “You can hear everybody,” she says. “There’s no machines running. There’s not any work.”

Bansfield’s experience resonates across the United States. Since 1989, GE’s domestic labor force has declined by 75%—from 277,000 to just 70,000 workers, according to a new report first reviewed by TIME from the University of Massachusetts, Boston and Cornell University. Part of that decrease can be explained by GE’s decision to sell pieces of its business, including its biopharma and transportation arms. But its manufacturing plants have been gutted too: since the 1980s, production personnel at GE’s Lynn, and Schenectady, New York plants have been cut by 90%.

This dynamic reflects in many ways a central economic story in the U.S. over the last thirty years. Large corporations have been off-shoring, and down-sizing domestic manufacturing en masse since the 1990s, fueled by noncompetitive labor rates, powerful trade agreements, and innovations in automation. On Tuesday, GE announced that it will divide itself into three public companies—aviation, healthcare and energy.

But GE’s disinvestment in America’s domestic labor force is different, the UMass/Cornell report says, because of the volume of state and federal taxpayer grants, tax credits, and subsidies the company received while simultaneously disinvesting in the U.S. economy. GE has drawn roughly $1.6 billion in federal money since Fiscal Year 2000, plus $687 million in state and local awards since 1992, totaling more than $2.2 billion, according to a nonprofit’s subsidy tracker that the report uses. Over roughly the same period, the report says, three out of every four GE jobs in the U.S. disappeared.

Take, for example, a $25 billion federal program that provided tax credits to energy companies for every megawatt hour of commercial wind energy they sold between 2007 and 2016. That program had the indirect effect of increasing both the demand for and price of wind turbines, which left GE—the producer of 41% of the wind turbines operating in the U.S. in 2016—in an enviable spot.

That would seem like a public policy success story, the researchers say, except many U.S. workers have been left out of the bonanza in recent years: 13 of the 14 LM Wind power plants that GE now lists on its website are located outside the U.S., and its sole production hub of offshore wind turbines is located in Saint-Nazaire, France. Five of its six onshore wind turbine-head assembly facilities are located abroad.

GE’s approach has affected American workers. Prior to 2017, when GE acquired LM Wind Power, its Denmark-based wind turbine manufacturer, it relied more heavily on U.S. workers to make its turbine blades. GE had been putting in orders for wind turbine blades at an Aberdeen, South Dakota plant of a small American composites manufacturer called Molded Fiber Glass. GE had been the plant’s only client. So shortly after GE moved its sourcing abroad, roughly 300 Molded Fiber Glass employees lost their jobs.

GE indicates it is now scaling up its domestic renewable work. Roughly 500 U.S.-based union jobs off the coast of Martha’s Vineyard will be created to build new Haliade-X wind turbines for a major offshore wind project, says a GE spokesperson. The spokesperson also said the company is considering the “possibility” of opening a facility in New Jersey that would assemble the part of wind turbines that house their electrical generators.

But the UMass/Cornell researchers say such investments don’t begin to offset the amount of public funding GE has received over the years. “Taxpayer dollars—in the form of government contracts and subsidies,” the report says, “have bankrolled GE’s transient approach to manufacturing.”

Tough to pin down

There is no state or federal entity that tracks exactly how much a company like GE receives in public money—which can include loans, tax credits, grants, or other forms of taxpayer funds. The total dollar amount that a company amasses is not subject to mandatory disclosure and is therefore often never made public.

The $2.2 billion in public funds that the researchers say GE received is based on data compiled by Good Jobs First, a non-profit economic watchdog based in Washington, DC that lists GE’s federal subsidy awards going back to 2000. Its data is archived by the Library of Congress.

GE disputes the figure. Company spokespeople say that $2.2 billion sum included, for example, funds that state and federal governments paid to GE for products and subsidies to companies that were only later acquired by GE. For instance, the power business Alstom received at least $68 million in subsidies between 2002 and 2014, but GE did not purchase Alstom until 2015. A GE spokesperson adds that the $2.2 billion figure included $145 million that GE repaid to Massachusetts after GE scaled back its plans for its Boston headquarters. GE declined to provide another figure indicating the total amount of public funds the company has received in the last thirty years.

“While we have not been given the opportunity to review this report, we disagree with its findings based on our continued investments in our workforce and facilities across the country,” according to a statement from GE, which noted that the company has invested more than a billion dollars in expanding its U.S. facilities since 2015.

Greg LeRoy, the executive director of Good Jobs First, defended the tracker’s methods and accuracy. It always accrues past subsidy awards to the current controlling corporation because the subsidies often figure into merger and acquisition deals, he said. Alstom, for example, received federal grants totaling more than $12 million the year before GE acquired it, according to the tracker. That cash infusion can “clearly accrue to the financial benefit” of a current corporate owner, LeRoy says.

LeRoy added that, if anything, the $2.2 billion figure is likely too low, given GE’s size, geographic reach and tax maneuverability. Funds that are not disclosed by local governments, that arrived in the form of corporate income tax credits, or that were awarded outside the public application processes are nearly impossible to track. Good Jobs First’s LeRoy adds that his researchers were able to identify 68 cases in which GE and its subsidies received public funds, but the dollar value was not made public—and therefore not included in the $2.2 billion sum.

Whether GE received more or less than $2.2 billion in government funds is not as important, the researchers argue, than examining whether that public investment ultimately served U.S. goals.

In the late 2000s, for example, GE took advantage of a $5 million state grant and a series of tax breaks to announce a multi-million dollar Schenectady renovation project that brought at least 500 high-paying jobs. Half of those jobs focused on developing renewable and alternative energy sources, making Schenectady the hub of GE’s burgeoning renewable energy work. When the renovations were complete, former President Barack Obama visited the factory in 2011 and hyped domestic investment of that kind. “We want an economy that’s fueled by what we invent and what we build,” he said.

But four years later, the company stationed the headquarters of its new venture, GE Renewable Energy, in Paris rather than New York state. (GE says it invested $39 million of its own money into the Schenectady project, and that the 500-plus jobs created by the project still exist at the Schenectady plant today.)

“GE’s reliance on government subsidies is an indisputable fact,” says Nick Juravich, a primary author on the report and the associate director of the Labor Resource Center at UMass Boston, “as is our government’s willingness to continue awarding subsidies to GE despite its rampant offshoring.”

GE’s off-shoring of manufacturing jobs is most clearly felt by U.S. workers themselves. “It’s been an ongoing joke since I’ve been there that GE will close in, like, five years,” says Bansfield, now an inspector at GE’s Lynn factory. The possibility that her job is outsourced or moved abroad now feels so imminent that she’s gone back to school, she says, “just to have a plan B.”

Kevin Smith, a former GE quality control worker in Salem, Virginia, says the problem is that communities themselves need a ‘plan B,’ too. In the two years since GE shuttered the Salem plant, which employed more than 200 workers, Smith and many of his colleagues have not been able to get new jobs with comparable pay or benefits. And that has rippled throughout the community, he says, from holiday charity drives to local spending.

It’s a similar story in Schenectady, where GE has reduced its workforce from nearly 30,000 unionized hourly production workers in 1970 to approximately 800 unionized hourly production workers now, according to the report. Christian Gonzalez, a 30-year-old castings processor in Schenectady plant’s gas turbine department, remembers a time between 2013 and 2016 when he and 40 to 50 of his colleagues would organize Friday lunches. “We would order out,” he says. “You’re talking hundreds of dollars on a weekly basis patronizing Schenectady small businesses.” Since then, Gonzalez’s team has roughly halved, he says, and they no longer do the big group lunches.

Arthur Wheaton, the report’s other primary author and the director of Western NY Labor and Environmental Programs for the Worker Institute at Cornell, says those job losses have a “multiplier effect” on community. “A dollar doesn’t just go to the employees, it goes through the community to all sorts of restaurants, nonprofits, [and] other activities,” he says, and that has “a major impact when you’re cutting thousands and thousands of jobs.”

GE says it’s investing in domestic workforce training. Earlier this month, it announced a $4.4 million grant to extend an “advanced manufacturing training” program benefitting Lynn and the Massachusetts’ North Shore, and ​​in 2019, it invested $900,000 in an internal training program. GE remains one of the largest manufacturers in Massachusetts, employing nearly 2,450 people in the state. GE also continues to invest in manufacturing domestically, the report notes, including more than $4.3 billion in its domestic Aviation Division, versus just $1.1 billion abroad since 2010.

But the researchers maintain that directing a fire hose of public funds at GE as it simultaneously winds down domestic manufacturing represents a lost opportunity—both for fighting climate change and supporting a healthier U.S. economy. That may be especially true amidst a period in which the White House and majority-rule in Congress is prioritizing renewable energy investments.

“There’s a huge amount of growth here,” says Juravich, of the opportunities in the renewable energy market. “The question is whether it’s going to benefit American workers.”

GE’s announcement Tuesday that it will split up its businesses into three separate ones doesn’t change the researchers’ calculations. “Whether managed by one company or three, GE’s core industrial businesses rely on government contracts and subsidies and are inextricably intertwined with US industrial policy,” Juravich adds. “We hope that GE’s plan to ‘realize the full potential of each of [their] businesses’ will include re-investing in US workers and communities.” 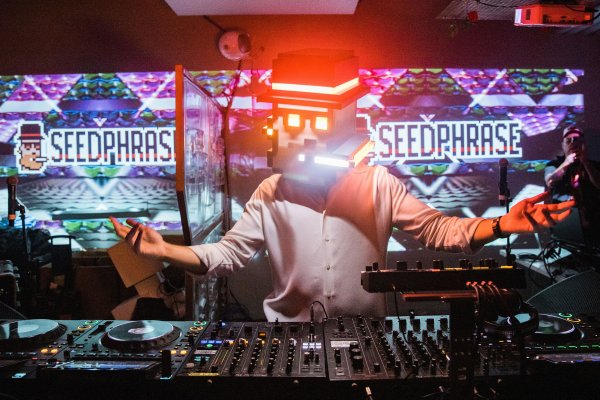 When Crypto and Culture Meet: The IRL Parties of NFT World
Next Up: Editor's Pick