A Ukrainian soldier guards a road not far from Prokhody, a village in the Kharkiv region, some 4 km from the Russian border
AFP/Getty Images
By Per Liljas

Kiev has mobilized its armed forces in the eastern part of the country and announced a full-scale counterinsurgency mission to weed out what it calls “armed terrorists” as pro-Russian groups continue to occupy a number of Ukrainian government buildings in defiance of ultimatums to surrender.

A day after separatists launched synchronized attacks across eastern Ukraine on Sunday, seizing government buildings and arms in several towns in defiance of Kiev’s warning it would take action against the militants, a police building in the border city of Horlivka was broken into by dozens of angry men who hurled rocks and broke windows. The AP reports that hundreds of spectators cheered on the insurgents as they raised the Russian tricolor.

The scene in Horlivka is just the latest of similar events to occur in the Russia-leaning region. At least one Ukrainian security officer was killed on Sunday in a seemingly unsuccessful attempt by the government to retake the police station in the city of Slovyansk.

The emergency U.N. Security Council meeting that night over the escalating crisis in Ukraine saw a fiery exchange of condemnations and accusations. “This instability was written and choreographed in and by Russia,” said U.S. Ambassador to the U.N. Samantha Power, echoing a statement released by the State Department.

The State Department claimed that the operations bore “many similarities to those that were carried out in Crimea in late February” and went on to highlight evidence of Russian participation, such as the highly organized manner of the attacks and the unmarked Russian military equipment being used.

Moscow has denied involvement in the attacks, and Russia’s Ambassador to the U.N. Vitaly Churkin went on the offensive at the Security Council meeting, claiming that Kiev’s “self-proclaimed government” included neo-Nazis. He called on it to stop attacking its “own people.”

Russia reportedly has 40,000 combat-ready troops positioned along the Ukrainian border and has warned Ukraine on several occasions not to attack the separatist groups dug in at government buildings. The U.S., for its part, has cautioned Russia not to invade Ukraine.

The Prime Minister of neighboring Poland, Donald Tusk, told reporters that Ukraine no longer had any choice but to respond militarily.

“The moment comes when Ukraine has to act and show that they do not accept these actions,” he told reporters. “The brutal truth is that Putin will not stop where he wants, but where Ukraine lets him.”

On Sunday, over 10,000 anti-Kremlin protesters took to the streets of Moscow to protest against Russian state television’s news coverage of the conflict in Ukraine. Power reiterated their sentiments, stating: “The lives of innocent civilians are at risk, yet we are being bombarded by Russian disinformation and propaganda, while the Ukrainians are being confronted by incitement and violence.”

Ukraine’s Foreign Ministry said on Sunday that evidence and eyewitness testimonies of Russia’s involvement in the “separatist insurgency” will be presented to the international community on April 17 in Geneva. U.S. Vice President Joe Biden will travel to Ukraine on April 22 to underscore American support and discuss security issues. 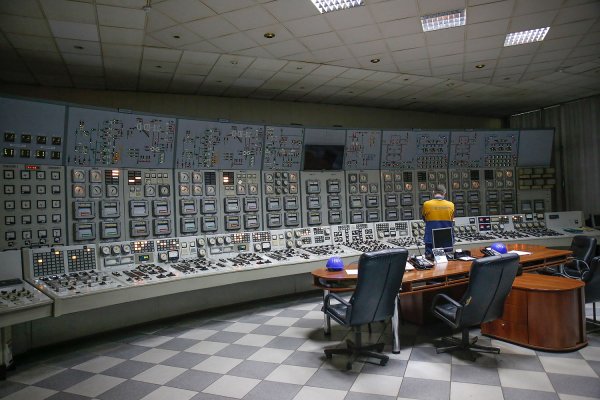 Fuel Duel
Next Up: Editor's Pick