Eric Leroy Adams was elected the 110th mayor of New York City Tuesday, following a campaign in which he won the support of New Yorkers across class and racial lines with promises to restore the pandemic-ravaged city to its former glory.

The Associated Press declared the 61-year-old Democratic Brooklyn borough president the winner over Republican anti-crime activist Curtis Sliwa. Adams had 67% of the vote with 65% of precincts reporting, according to the AP, which called the race 11 minutes after polls closed.

“I’m perfectly imperfect, and the city is made up of perfectly imperfect people,” Adams said at an Election Night party at the Marriott hotel in Downtown Brooklyn. “That’s the combination that will allow us to create a perfect city where no one is left behind.”

Flanked by family and supporters, Adams used his victory speech to highlight the resolve of blue-collar New Yorkers who helped propel him to City Hall. He also called for unity in a “divided” city, pledging to bring firefighters, police officers and other civil servants into the fold.

“We have to get this out of our head that the CEOs in this city don’t want to participate in uplifting our city,” he said. “It’s time to build bridges we’ve destroyed in the past. We need each other.”

In another contrast with de Blasio, who clashed with former Governor Andrew Cuomo, Adams also used the moment to showcase his determination to work alongside Governor Kathy Hochul. Taking center stage in the middle of Adams’s Tuesday night speech, Hochul called her relationship with Adams the beginning of a “new era of cooperation.”

Following the speech, Adams’s campaign said he was headed to an after-party at the members-only club Zero Bond in Manhattan, where billionaire Mike Novogratz and Wendi Deng were already in attendance.

Adams’s election to what’s known as the “second-toughest job in America” catapults him to a national political figure at the center of some of the nation’s most intractable debates.

He’s a reform-minded but tough-on-crime former police officer at a time of rising worries about crime and frayed police-community relations. He’s a moderate Democrat in an increasingly progressive party. And he’s proclaimed an end to “anti-business” rhetoric while demanding the city’s businesses better address income inequality and other social ills.

Tuesday’s victory over Sliwa, founder of the Guardian Angels anti-crime patrol, was preordained in a city where Democrats outnumber Republicans by roughly 7-to-1. Sliwa tried to capture the city’s attention with TikTok videos and publicity stunts centered around a platform of public safety, tax reform and animal rights. Adams dismissed his challenger’s campaign as “buffoonery.”

Adams has conducted himself as the de facto mayor-elect since July, when a lengthy ballot-counting process ended with Adams atop a 13-candidate Democratic field. Primary election results showed that Adams won on the strength of Black, Hispanic and low-income voters in the city’s outer boroughs. After his victory, he was quick to proclaim himself the “face of the new Democratic party” and weigh in on vaccine mandates, school programs and other decisions made by outgoing Mayor Bill de Blasio.

When Adams is sworn in Jan. 1, he will replace the term-limited de Blasio, whose eight-year mayoralty was defined by the coronavirus crisis, clashes over policing and an ill-fated run for president.

“The policies I ran on, they were clear,” he said outside a polling site in Brooklyn Tuesday. “It’s about being safe. It’s about working on behalf of blue-collar people.”

Incoming New York mayors have faced challenges before. Ed Koch inherited a crime-ridden city on the verge of bankruptcy in 1978. Former Mayor Michael Bloomberg was nominated in a primary election scheduled on Sept. 11, 2001 and had to rebuild a city devastated by the terrorist attacks.

Adams will inherit his own set of problems plaguing New York: Race relations, violent crime, budget headaches, an exodus of work-from-home professionals and a series of union contracts up for negotiation. And Adams’s penchant for trying to be all things to all people — coupled with vague or even conflicting solutions to some of those problems — has left business leaders wondering how Adams will act once he shifts from campaigning to governing.

The second Black mayor in the city’s history, Adams calls himself New York City’s first blue-collar mayor. He was born in Brooklyn in 1960, and his family moved to Queens when he was 8. Adams often recounts how he joined a gang at 14, and was arrested and beat by police at 15. And at 24 — inspired both to serve and reform the New York Police Department –– he joined the force.

Over 22 years of law enforcement experience, Adams led groups of Black officers and rose to the rank of captain — giving him a unique and often complicated perspective on policing. He was criticized during the Democratic primary for supporting stop-and-frisk policies, albeit a modified version.

He first started plotting a run for mayor as early as the 1990s, and briefly registered with the Republican party before running for the New York Senate as a Democrat in 2006. He served four terms in the Senate and two as Brooklyn borough president, where he was all but unopposed.

Borough presidents have limited powers, but Adams often used the position to fast-track residential development in Brooklyn while also railing against gentrification.

In an interview with Bloomberg News, Adams said he would reverse the “uninviting spirit” that businesses found in the city over the last eight years — but that begins with an emphasis on safety.

“The prerequisite to prosperity is public safety and justice. If the city is not safe, if we don’t bring down gun violence, gang violence, if we don’t bring down those crimes, then our tourism will be impacted,” he said. “Businesses would be impacted. We can’t get employees back into the office spaces because people are afraid to ride the subways.”

—With assistance from Amanda Gordon 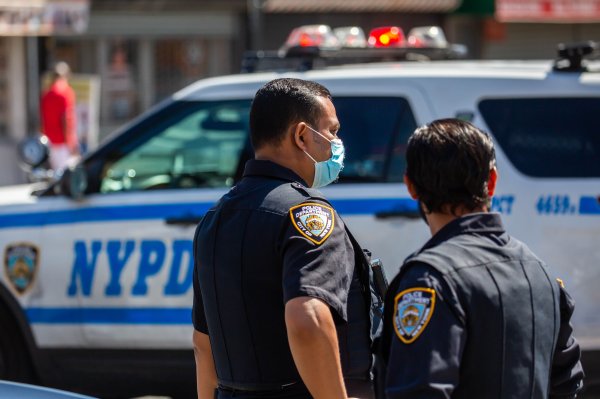