Magic Johnson during Game Five of the 1991 NBA Finals on June 12, 1991 at the Great Western Forum in Inglewood, California.
Andrew D. Bernstein—NBAE/Getty Images
By Francine Uenuma

For many watching Earvin “Magic” Johnson on television on Nov. 7, 1991, his words were tantamount to an announcement of his own death sentence. In a press conference hastily convened by Johnson and the Los Angeles Lakers after a local media outlet got wind of the story, the 32-year-old NBA superstar revealed he was HIV positive.

Dr. Michael Mellman, then the Lakers team physician, remembers a last-minute conversation with Johnson, just before they walked out to face a sea of cameras: “He looked at me and said, I just want to get this straight, I have HIV, not AIDS, right?”

Despite the unscripted nature of the moment, Johnson was calm and matter of fact. And he followed his disclosure with a second bombshell, announcing his retirement from basketball—a sport he had dominated for much of his 13-season career, racking up more than 17,000 points and helping propel the Lakers to five NBA Championships.

(Johnson’s career was in fact not over, on the court or off—just a few months later he played in the 1992 NBA All-Star game, and on the 1992 U.S. Olympic men’s basketball team. He also returned to the Lakers during the 1995-1996 season.)

In the years that followed, Johnson was “extremely fortunate” in being able to live with and manage the virus with treatments available at the time, in particular before the 1996 release of a potent triple-combination therapy that has prolonged the lives of many with HIV, according to Dr. Anthony Fauci, director of the National Institute of Allergy and Infectious Diseases.

“I knew many people, many of whom were friends of mine, who were infected at the same time—but their disease progressed so rapidly that by the time optimal therapy was available, they had already passed away,” says Fauci, who was among those who counseled Johnson after his diagnosis.

The human immunodeficiency virus (HIV), and the acquired immunodeficiency syndrome (AIDS) which it can cause, had entered the mainstream American lexicon a decade earlier, when doctors began seeing increasing numbers of young, seemingly healthy men presenting with a form of pneumonia typically seen in immunocompromised individuals. In the early 1980s, as researchers scrambled to understand and treat the virus, the number of infections continued to climb—and AIDS was fatal for virtually everyone diagnosed with it. By 1991, it had claimed more than 100,000 lives, according to statistics on known cases.

Some of those who perished were well known—Disney lyricist Howard Ashman, photographer Robert Mapplethorpe, artist Keith Haring and dancer/choreographer Alvin Ailey, to name just a few. The film star Rock Hudson, one of the first major celebrities to acknowledge that he had AIDS, died in 1985; just weeks after Johnson’s announcement, Queen singer Freddie Mercury died of AIDS-related complications. Decorated Vietnam veteran Leonard Matlovich, who had appeared on the cover of TIME in 1975 above the words “I Am a Homosexual” in his bid to challenge his discharge from the Air Force, died in 1988.

Compounding the suffering of those afflicted was a lack of understanding and sympathy in public discourse, where notions of morality often overshadowed medical knowledge. It also took years of education to reinforce the fact that HIV is not spread through casual contact, a fear that had arisen among other players when Johnson played again in the 1990s.

“I think sometimes we think only gay people can get it… I am saying that it can happen to anybody—even me,” Johnson told reporters, facing his stark new reality with a mixture of pragmatism and optimism at a time when reassurances were in limited supply. “Life is going to go on for me, and I’m going to be a happy man,” he predicted, vowing to become a “spokesman” for the virus.

Clients wait in line for a free HIV test at a mobile testing center as part of the "I Stand with Magic" program on Dec. 3, 2006 in Los Angeles, California.
Matt A. Brown—NBAE/Getty Images

In many ways, he already was. In the days that followed, sadness, shock and admiration coalesced as fans absorbed the news that even Magic was not invincible in the face of this epidemic. “The day after he told the world,” the Associated Press reported, “people talked and cried and thought about little else.” Having such a “beloved” public figure reveal his HIV infection, Fauci says, “really jolted people into a much more empathetic view towards people who were living with HIV.”

The tangible effect of his announcement was immediate. The next day, calls to testing centers doubled. In the month following his announcement, HIV testing rose by nearly 60 percent in New York City.

Though bipartisan support was apparent, it took time for resources to reach levels commensurate with the epidemic at hand. President Ronald Reagan did not mention the virus publicly for four years after it emerged; his first major speech about AIDS came in 1987. (And Johnson himself criticized his successor, President George H.W. Bush, for “lip service” when he resigned from the National Commission on AIDS in 1992.) Still, federal funding rose sharply from the early 1990s onward, which helped enable breakthroughs in treatment. Today, 1.2 million people are living with HIV in the United States. For many of them, what was once a harbinger of sickness and death can now be a chronic and manageable illness when suppressed by antiretroviral medications.

But despite the remarkable progress in treating the virus over the past 40 years, glaring disparities persist—HIV continues to disproportionately burden minority groups. Though they comprise 13 percent of the overall population, Black/African American individuals accounted for 42 percent of diagnoses in the United States in 2019; for Hispanic and Latino individuals, that figure is 29 percent. Given current trends, we are “on track to end the epidemic among white Americans much sooner than we are among black and Latino Americans,” says Dr. Oni Blackstock, founder and executive director of Health Justice. Blackstock previously led the New York City health department’s response to HIV.

Many of these disparities—among them insurance coverage, access to health care, the prevalence of underlying conditions—have also been mirrored in the COVID-19 pandemic. In an April 2020 interview, Johnson highlighted the outsize impact of COVID-19 on Black Americans, who have been sickened, hospitalized and died at higher rates; Fauci sees commonalities in the “the underlying root cause of disparities in health, be it from HIV or COVID-19,” as well as a range of other illnesses.

“That is all ultimately rooted, when you talk about social determinants of health, in the smoldering and inherent and persistent racism in our society,” Fauci continues. “That’s just a fact and you can’t run away from that.”

In the face of these persistent realities, Johnson’s words from that day retain their relevance three decades later. At a time when denial about HIV was pervasive, Johnson opted to double down in the face of an uncertain future. “It’s like your back is against the wall, and I think that you just have to come out swinging—and I’m swinging,” he said in his announcement.

“This was Earvin. I had never known him to back down from or hesitate to go towards whatever he had to do,” Mellman recalls. “I was not surprised by what he did… It’s who he is and who he was.” 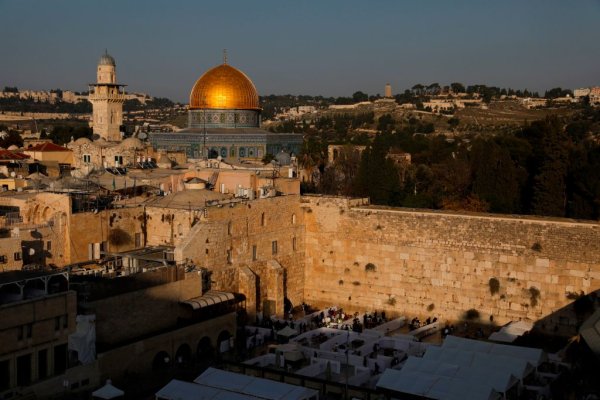 How Christians Eager to Unearth the Biblical Past Sparked Strife in Jerusalem
Next Up: Editor's Pick