If We're Serious About Saving American Democracy, This Voting System Might Be the Key

People visit an early voting site at a YMCA in Brooklyn on October 25, 2021 in New York City.
Spencer Platt—Getty Images
Ideas
By Katherine M. Gehl and Jonathan Haidt
Gehl is a former CEO, the founder of The Institute for Political Innovation, and the co-author of “The Politics Industry: How Political Innovation Can Break Partisan Gridlock and Save our Democracy.”
Jonathan Haidt is a social psychologist at New York University’s Stern School of Business. He is the author of The Righteous Mind: Why Good People are Divided by Politics and Religion.

New York City has chosen its next Mayor. It happened more than four months before election day, November 2, when Eric Adams won the Democratic primary.

Why is the general election in one of the most important cities in the world seen as a non-event—and why doesn’t anybody seem to care?

Because we’re all used to it. Across the country, the importance of general elections (aside from the presidential one, of course) has been in decline for decades as party primaries have become the deciding elections.

According to recent studies, general elections are virtually meaningless in over 80% of races for the U.S. House of Representatives. In each of those races, as Mr. Adams can confidently assume in NYC, the winner was chosen in the primary. Republicans who win primaries in safe red districts are virtually guaranteed to win the general, and in safe blue havens, the winner of the Democratic primary similarly coasts to office.

That has to change. General elections, a hallmark of healthy, competitive democracies, should be as determinative as they are sacred. And while the health of New York City is critical, Congress, which has the same “primary problem,” is the most pressing concern.

Thankfully, there is a much better way to elect leaders: It’s called Final-Five Voting, and it was described by one of us (Gehl) as part of a 2017 Harvard Business School report on political competition, with co-author Michael Porter. It’s also happening; one of the most important Senate races in the country next year will follow the methodology (more on that later.)

Final-Five Voting (FFV) is the combination of two simple changes: First, replace separate party primaries with a single primary offering one slate of candidates (all Republicans, Democrats, Independents and third parties on the same ballot) in which every registered voter is eligible to participate. The top five finishers from that open primary advance to the general election. Second, do what New York City should have done: use ranked-choice voting in the general election that follows the single open primary to determine the majority winner. Ranked-choice—also known as instant-runoff voting—is perfectly suited to a five-way general election because while five candidates delivers the benefits of dynamic competition, those benefits would be diminished if one of the five candidates were to win with a narrow plurality. Instant-runoff voting narrows the field to the final two before the winner emerges with a true majority.

Had New York City implemented Final-Five Voting, Adams’ mayorship would not be a fait accompli four months before the election.

But of even greater import, by running a single open primary that sends multiple candidates—regardless of party—to the general, the votes and ideas of the currently disenfranchised Big Apple Republicans and Independents would begin to matter, even while Democrat voters would likely continue to dominate. Instead, by keeping the party primary intact, it’s just more of the same election theater: fewer than 1 million Democrats—less than the number of active registered voters in some individual boroughs—have chosen the leader for the 8.3 million citizens.

If you followed this year’s primary closely, you noticed the New York narrative revolved around how the botched administrative process hurt the perception of RCV, but the biggest miss came earlier when leaders left the party primary intact.

We need to cancel party primaries. They are the single greatest reason Congress can’t deliver consensus solutions to our most pressing national challenges. In most jurisdictions, Senators and Congresspeople answer to that small subset of more politically extreme primary voters and that means they can’t really afford to work on behalf of all of the constituents they are supposed to represent. It’s logical; if they can’t win their party primary, they can’t get to the general election.

“The effects [of party primaries] on Congress are plain for all to see,” writes AEI resident scholar Kevin Kosar. “Legislators fear working across party lines on any issues that might tick off their most passionate voters. Republicans refuse to cut a deal on immigration that looks like ‘amnesty’ and Democrats flee any talk of reigning in entitlements, which consume about 70 percent of the budget. Many legislators want to reach compromises on pressing issues like these, but they don’t. Nobody wants to get primaried.”

What was once a noun—the “primary”—has become the most powerful verb in American politics—“to primary.” As a result, 10% of voters (i.e., those voting in the determinative primary in any state or district) dictate what is and isn’t possible in D.C. And there is something on which substantial portions of both extreme factions agree: don’t work with the other side, don’t negotiate consensus, don’t give in.

FFV is not a pipe dream. It can be enacted in the states without any need for Congressional approval. Alaska has proven that: Leaders in Alaska used Gehl’s 2017 work to shape a ballot initiative for a close sibling of Final-Five—top-four primaries with RCV general elections—and in November 2020, Alaska voters gave it the go-ahead. In 2022, we expect citizens in multiple states to have the same opportunity to vote yes on Final-Five Voting ballot initiatives.

FFV changes the dynamics of elections, and in so doing it changes the incentives and behaviors of politicians before and after they are elected. It is a system that prioritizes healthy competition—with its incentives for innovation, results, and accountability. Here are five of its benefits:

For most of our lives Americans have believed that liberal democracy fostered progress; we believed that America and its constitution was a role model for the “free world.” These last two decades have seen a decline in our confidence as our federal government lurches from crisis to crisis, only able to take major actions in those brief periods when one party happens to control the White House and both chambers of Congress. This is no way to run a country. We must match the promise of our constitution with an election system that helps our leaders to work together on our common challenges. 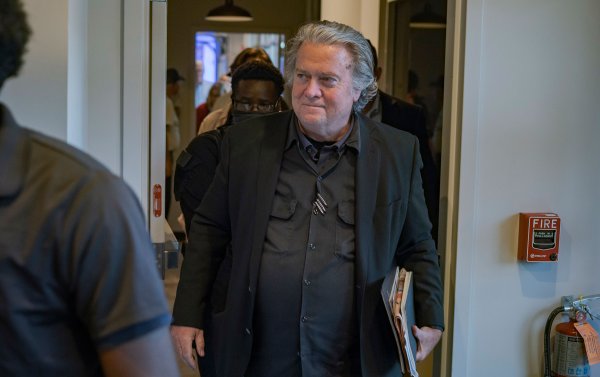 Criminal Contempt Is the Appropriate Solution for Dealing With Steve Bannon
Next Up: Editor's Pick