Gender Issues Could Be a Game Changer in India's Elections

Karuna Nundy, seen here addressing German President Joachim Gauck on the role of women in India in February, is a founder of the Womanifesto campaign
Getty Images
By Preethi Nallu / New Delhi

As India enters its second week of nationwide polls, the issue of female safety from sexual violence is coming second only to corruption in the minds of voters — and politicians, it seems, aren’t taking them seriously. According to a joint survey by Marketing and Development Research Associates and online campaign forum Avaaz, over 90% of Indians want tackling sexual violence treated as a priority, and 75% are not satisfied with the promises made by politicians on the issue so far.

Ever since the brutal gang rape and death of a 23-year-old in Delhi in December 2012, the country has agonized over the problem of sexual violence. But despite the protest marches and nationwide campaigning, many see a dearth of meaningful content in party manifestos when it comes to tackling the problem.

To help redress this, 70 independent civil-society activists have launched the so-called Womanifesto 2014, which sets out positions on female economic empowerment, female access to education and political representation, the faster administration of justice in cases of sexual violence, and better policing.

“Laws and government policies have improved, where voyeurism, stalking harassment are now specific crimes, but we need structured changes across the board,” explains Karuna Nundy, a Supreme Court lawyer who co-authored the six-point document.

According to Nundy, the promises that have been made on women so far are condescending and paternalistic — “as a sister or a daughter you will be protected, but it comes with certain conditions and also punishments when they are not met.”

She says that instead of “promising safety,” political leaders should be “guaranteeing freedoms” without moral conditions attached.

The Womanifesto movement has been knocking on the doors of different party offices with some success. The Aam Aadmi Party was the first to endorse all six points and Congress is the latest to incorporate the document into its own platform. Given its strong lead, Bharatiya Janata Party is a crucial next target.

“There are a few vague commitments on their manifesto, very thin on the ground and ad hoc,” points out Nundy.

Because women make up 49% of the electorate, the Womanifesto group is also attempting to mobilize female voters at all levels. They contend that if Indian women across the board came together on the issue of gender rights, they would constitute an extremely powerful block — one that could hold politicians to account.

“If this [document] were to become the common minimum program for any government that came to power and for the electorate that holds them accountable, we would have achieved success,” says Nundy. 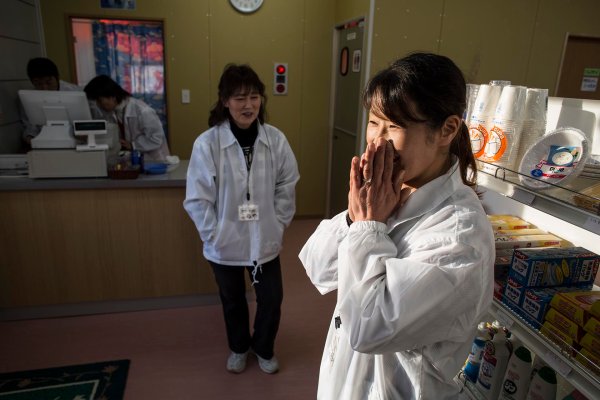 Japanese Firmly Disagree With Abe on Nukes
Next Up: Editor's Pick