Your mistake: Microwaving or boiling them
The fix: Steaming

Why it works: Steaming helps retain cancer-fighting nutrients in broccoli better than other cooking methods, reports a new study from the University of Illinois at Urbana-Champaign. Sulforaphane — a plant compound with strong anti-cancer properties — is abundant in cruciferous vegetables like broccoli, cauliflower, kale and arugula. The enzyme myrosinase is necessary to release the compound, but most cooking methods destroy it. Steaming is a slower, gentler heat and isn’t intense enough to kill myrosinase, explains study author Elizabeth Jeffery, Ph.D. Cook broccoli in a steaming basket for three to four minutes for the biggest cancer-fighting boost.

Your mistake: Slicing them before eating
The fix: Eating them whole

Why it works: Whole strawberries contain 8% to 12% more vitamin C than the cut fruits, according to a 2011 Brazilian study. That’s because vitamin C begins to break down when it’s exposed to light and oxygen. For the biggest C boost, store whole strawberries in the fridge — cool temperature helps retain vitamin C too, finds the same study.

Your mistake: Letting a bottle “breathe”
The fix: Sipping a freshly opened bottle

Why it works: When red wine is decanted for long periods of time — up to 12 hours — the organic acids and polyphenols begin to break down, according to a 2012 Chinese study. Leaving the bottle open overnight nixes the usual benefits of a glass of red, including decreased depression, increased testosterone and a healthier heart.

Safeguard your body’s most important organ: 100 Ways to Protect Your Heart

Your mistake: Eating them raw
The fix: Heating them up

Why it works: Tomatoes have been linked to lowering men’s risk of stroke, helping fight prostate cancer and preserving brain power with age. Heating tomatoes significantly increases their levels of lycopene, the chemical that can up antioxidant levels. In fact, a recent study in the British Journal of Nutrition found that raw foodists — people who eat mostly uncooked produce — were deficient in lycopene. Cook tomatoes in olive oil for the biggest nutritional boost: lycopene is fat-soluble, meaning you need fat in your diet for your body to absorb it properly.

Your mistake: You skip right over frozen foods at the grocery store
The fix: Hitting the freezers

Why it works: “Most people think only fresh is healthy, but this is a huge misconception,” says Mary Cluskey, an associate professor of nutrition at Oregon State University. In fact, U.K. scientists found that in two out of three cases, frozen fruits and vegetables packed higher levels of antioxidants — including polyphenols, vitamin C and beta-carotene — than the fresh kind. As produce ages, nutrients begin to change and break down, says Cluskey. It’s therefore better to eat food that was frozen at prime ripeness with its nutrients intact than week-old produce that no longer has the same beneficial chemical makeup.

There are 46,000 foods in the average supermarket. How to choose what to put in your cart? Here’s your shopping list: The 125 Best Foods

This article was written by Rachael Schultz and originally appeared on Men’s Health. 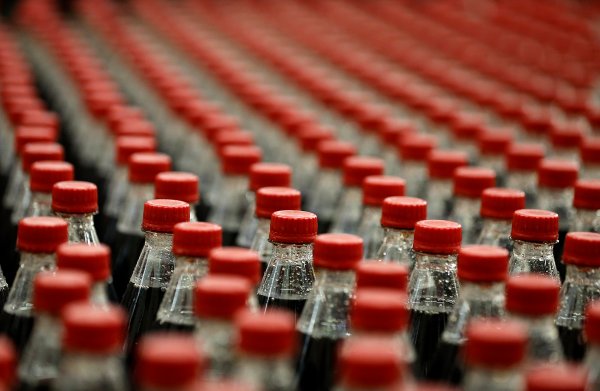 Can You Die From Drinking Too Much Soda?
Next Up: Editor's Pick