Life for Whitney Green looks a little different these days. She wakes up to the sounds of Rome: scooter engines echoing off cobblestones, the lilting chatter of café patrons collecting their morning espresso shots. She goes to Italian classes in the afternoons. She eats bowls of pistachio gelato and handmade pasta, and watches tourists congregate at the Trevi Fountain and Piazza Navona. She’s teaching herself to play keyboard and building a website for her dream job—her own telehealth practice. It’s a far cry from her past life as a community mental-health therapist for at-risk youth in San Francisco, a job she quit in June to move to Italy with her girlfriend.

Green is one of millions of Americans leaving traditional jobs this year—and choosing not to recommit to clocking in at all. This is the highest mass resignation the U.S. has seen since 2019, pre-pandemic, and the numbers are still rising. In June, 3.9 million quit. In July, it was another 3.9 million. In August, 4.3 million. The numbers are even more notable for young workers: in September, nearly a quarter of workers ages 20 to 34 were not considered part of the U.S. workforce—some 14 million Americans, according to the Bureau of Labor Statistics, who were neither working nor looking for work.

Whitney Green doesn't see herself returning to an office; after four years as a community therapist, she quit to move to Rome and is living off her savings.
Stephanie Gengotti for TIME

For some, it’s burnout. For others, the timing was ripe to refocus on side projects as the stresses of the pandemic started to wane. And for many, especially in a service sector dominated by “zillennials” (those in their late 20s on the border of Gen Z and millennial), poor treatment and low wages became unsustainable. Green represents one slice of that: she’s a 31-year-old with a master’s degree who decided to step back from earning income to take a self-imposed sabbatical and live off savings before working for herself one day. Meanwhile, there are an estimated 10.4 million jobs in the U.S. that remain unfilled, as this exodus—dubbed the Great Resignation—offers young workers time to nurse the wounds of pandemic burnout and untenable working conditions with dramatic life changes.

“This is a revolution, not a resignation,” says Ifeoma Ezimako, 23, who resides in Washington, D.C. A former hospitality worker and bartender, Ezimako was fed up with ill-tempered patrons and extra-low wages while working her last service job in March 2020; she had worked in service for five years, but enough was finally enough. As the behavior of customers deteriorated during the pandemic, she and her co-workers opened their eyes to the daily injustices of tipped work, she says. (A common experience: being asked to pull her mask down so patrons could see her face “to decide how much to tip.”) To her, the money just wasn’t worth the stress. She quit to refocus on herself, studying for a sociology degree with her family’s support. Now she volunteers with One Fair Wage, an activist organization that helps service industry employees organize for better standards.

The leisure and hospitality sector has the lowest median age of any industry, at 31.8 years, and today, Saru Jayaraman, president of One Fair Wage, says about half of surveyed service-industry workers say they plan to quit in the next year. Jayaraman is cautious in aligning this movement with that of white collar workers trading jobs for “funemployment.” “Maybe among white collar workers, it’s just people quietly resigning, but among service workers, they are organizing,” she says. “They are saying, I love this industry, but I will not come back unless there are permanent wage increases.” Even though many can’t afford to stop working, she says, they’ve drawn a line in the sand, thanks to the light-bulb moment of pandemic-precipitated challenges accessing unemployment assistance, worsening income inequality and newfound leverage due to staffing shortages.

There is a distinction between the experiences of Ezimako and Green. But both are part of a broader societal shift, wherein young workers are prioritizing their self-worth.

Read More: Why Literally Millions of Americans Are Quitting Their Jobs

Now, for the first time in their careers, young people have the ability to do so. Workers like Green, who had well-paying jobs leading into the pandemic, have a greater sense of financial comfort after spending less and saving more during the past 19 months, says Harvard economist Lawrence Katz. Plus, the abundance of open jobs may—counterproductively—make workers feel more confident dipping out of the workforce. Katz cautions that this is less about young workers leaving the labor market entirely, but instead about “trying out new things, and taking advantage of new opportunities and not sticking with the old bargain.”

The pivot to remote work has also made possible a level of work-life balance that those in their 20s and early 30s—the first generation where half of kids had two parents working full-time—had never imagined. That’s especially true for millennials; a 2020 Gallup poll showed 74% did not want to return full-time to offices, the highest of any age cohort. Millennial women are particularly likely to stay home given the need for childcare flexibility. Over 309,000 women dropped out of the workforce in September alone. “Childcare is a piece that people have been underestimating for a while,” says Alicia Sasser Modestino, an economist at Northeastern University. Even before the pandemic it was a crisis; now, with day care center closures and—ironically—staff shortages for these very jobs, women may have no choice but to stay home, indefinitely.

Over 10 million jobs are unfilled in the U.S.; signs like these, seen in New Jersey and Pennsylvania, paper the country.
Michelle Gustafson

Read More: The ‘Great Resignation’ Is Finally Getting Companies to Take Burnout Seriously. Is It Enough?

For others, remote work just isn’t fulfilling enough. When Emma Grace Moon quit her marketing agency job in June, she was ready to disentangle herself from a structure that held her back. “I felt like I could exceed my trajectory way faster if it was in my hands, rather than reporting every year, every month, with a quarterly check-in. I felt like I could be making more and also growing way faster if I just did it myself,” she says. These days, Moon—who is just 22, having skipped college—goes it alone as a consultant. She’s making three times her former income, she says from her Brooklyn apartment; her area of expertise, working with direct-to-consumer brands, was primed for pandemic-era growth. She now also has the flexibility to travel and make her own hours, even if that often looks like working all the time instead of 9 to 5.

Someone like Moon doesn’t quite fit the typical understanding of the employment market in the U.S.; as an independent worker, she’s not filling an available job listing. But with six clients and counting, she’s certainly not underemployed and doesn’t see herself shifting back to working for someone else, ever. “It’s allowed me a lot of time to think and process and make better decisions than I probably would if I had the pressure of a management team,” she says. Plus, the anxiety of depending on others for income is long gone. “I’ve had PTSD from past roles where I’ve seen people get fired out of the blue, or I’ve been fired before,” she says, citing the instability of startups where many white collar Gen Z and millennial workers gravitate.

The burnout of startup culture is common. Seattle-based engineer Cory Gabrielsen, 30, quit his job as the second employee at an agriculture technology startup in April. The travel demands were intense; he spent 14-day stretches on site visits overseeing robotic farm equipment, with requirements he calls “pretty insane.” After two years on the job, he was ready for time off. For several months after he quit, he says he did “nothing,” recovering from burnout.

Read More: The Pandemic Revealed How Much We Hate Our Jobs. Now We Have a Chance to Reinvent Work

Now, he spends his days option trading, running a Twitter bot account that tracks Ethereum pricing, and dabbling in Web3 and cryptocurrency investments. And while he wouldn’t describe himself as happier now—he misses the social interaction of an office—his mood is more “neutral” day-to-day, and he looks forward to building his presence as an independent entity who can do what he wants when he wants. “I have no stress on the job compared to what I used to do,” he says. He’s not working full-time and has no concerns about money, thanks to his savings, investments and a boom time in the crypto world. “My goal is not to go back to having a boss,” he says.

Economists predict that the Great Resignation is only getting started, especially for Gen Z and millennial workers who are well positioned to find new ways to earn income. A former colleague of Gabrielsen’s quit the same day he did and has since moved to Amsterdam. Moon and Green say many of their friends have sought advice on how to shift away from their nine-to-fives. Jayaraman warns that, unless the restaurant industry introduces drastic changes, even more young service workers will choose their mental health over income. Without significant government investment in childcare, young mothers will prioritize their families. Whatever their motivation, though, young blue collar and white collar workers alike are finding themselves happier—and more independent. For Green, the change has helped kick-start her dream of a balanced, fulfilling career, which becomes more of a reality with every daily scoop of gelato.

—With reporting by Mariah Espada 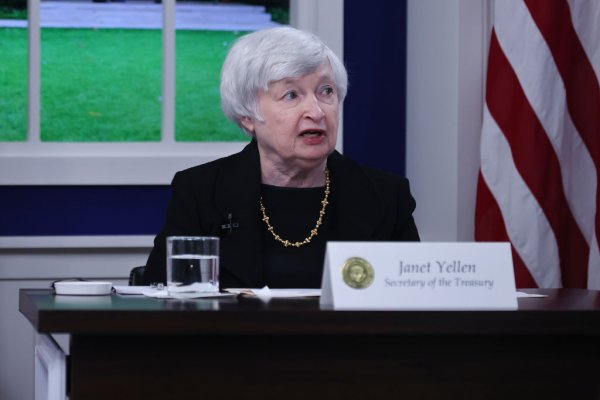 High Inflation Expected Through Mid-2022
Next Up: Editor's Pick