Should Aging Government Leaders Have to Pass Cognitive Tests to Serve?

Senator Bill Cassidy, a Republican from Louisiana, speaks with members of the media at the U.S. Capitol in Washington, D.C., U.S., on Wednesday, Aug. 4, 2021.
Al Drago—Bloomberg/Getty Images
By Charlotte Alter

Republican Senator Bill Cassidy finally said something few dare to say aloud: some of the people who run American government may be too old for the job.

“At some point, and statistically it’s in the 80s, you begin a more rapid decline,” Cassidy, a gastroenterologist, told Axios on HBO. “So anybody who’s in a position of responsibility who may potentially be on that slope, that is of concern, and I’m saying this as a doctor.”

They say wisdom comes with age. Yet so few of the nation’s leaders seem to have the wisdom to know when it’s time to call it a day.

The top echelon of American politicians is getting up there in age. At 78, President Joe Biden has faced attacks on his mental fitness, as did his septuagenarian predecessor, Donald Trump. Speaker of the House Nancy Pelosi is still negotiating reconciliation packages at 81, while the Senate’s top Republican Mitch McConnell is still trying to block them at 79.

Cassidy, who is 64, made clear that he wasn’t singling out anyone in particular with his suggestion that elderly members of government undergo regular cognitive tests.

“Would it be reasonable to have, for Supreme Court Justices, members of Congress and leadership positions in the executive branch, an annual sort of evaluation in which they would have to establish, ‘Yes, I’m doing okay?'” Cassidy continued, noting he had heard of Senators who were “senile” at the end of their terms. “I think that’s actually a reasonable plan.”

Some 30 states have age-based drivers’ license renewal requirements, including many that require seniors over 70 to take extra tests or apply in person to keep them. That standard that would apply to nearly 30% of the U.S. Senate. Except you don’t have to prove your mental acuity to continue driving the country.

The Founders set minimum age limits for serving in the House, Senate and Presidency, but never specified a maximum—partly because average life expectancy at the time was in the mid-30s. Now that Americans can expect to live more than twice that long, the government has become a gerontocracy.

Read more: How Millennial Leaders Will Save America

Cassidy is “not wrong,” says Amanda Litman, who usually disagrees with him on policy. Litman co-founded Run for Something, which recruits and trains young Democrats to run for state and local office. The advanced age of elected officials “is a huge problem,” she adds. “It’s an open secret and it directly affects the way the government functions.”

For every octogenarian operator like Pelosi or Bernie Sanders, there are others whose obvious fragility poses a genuine threat to the balance of power in Washington. One bad slip on a too-polished floor could make or break a majority, crumple a President’s agenda or upset the balance of power on the Supreme Court.

When 81-year old Senator Patrick Leahy of Vermont was briefly hospitalized in January, it sent tremors through the Democratic caucus, which could not afford to lose a single member without surrendering their grip on power in a 50-50 Senate. Diane Feinstein of California, the oldest member of the body at 88, has faced reports of cognitive decline, reportedly forgetting her briefings and repeating herself. (Feinstein has filed paperwork to keep her campaign committee alive in case she runs for re-election in 2024; her staff said that the paperwork was purely formal, and didn’t indicate anything about her plans to run.)

Senate Republicans are a geriatric bunch too. Senator Chuck Grassley of Iowa, 88, is planning to run for re-election next year. Senator Jim Inhofe of Oklahoma is 86; Senator Richard Shelby of Alabama is 87.

The problem also exists at the Supreme Court, where justices with lifetime appointments don’t have to answer to pesky voters as they decide how long to stay in their seats. Despite her cult status, many liberals remain furious at the late Supreme Court Justice Ruth Bader Ginsburg for staying on the court well into her 80s rather than stepping aside to allow President Obama to replace her. When she died last year during the final months of President Trump’s term, Ginsburg was replaced by conservative justice Amy Coney Barrett, cementing the court’s conservative majority and ratcheting up calls for liberal justice Stephen Breyer, 83, to retire while a Democrat is President.

The issue is about more than just the heightened risk of a sudden death tilting the balance of power, or a senile leader making important decisions. Keeping the government in the grip of the oldest generations means that the priorities of younger people—who had record turnout in the last two elections—frequently get the short end of the stick. Already, tuition-free public college has been nixed from the Democrats’ reconciliation bill. Climate change provisions are in jeopardy.

“The problems of young Americans are just a lot different now than they were right when a lot of the folks in Congress were our age,” says Maxwell Alejandro Frost, a 24-year old former March For Our Lives organizer who is running for Congress as a Democrat in Florida’s 10th district. “The constituency of young people are often overlooked.”

Frost, though, says he’s concerned cognitive testing would be a “slippery slope” that could be weaponized or politicized. He favors term limits to ensure Congress has more of a “revolving door.”

“I do think there’s an age at which people just become out of touch with things,” he says.

For every 80-something Senator who is sharp enough for primetime, there are likely others sitting in positions of major federal authority who should probably be sitting on their porches with their grandkids instead. 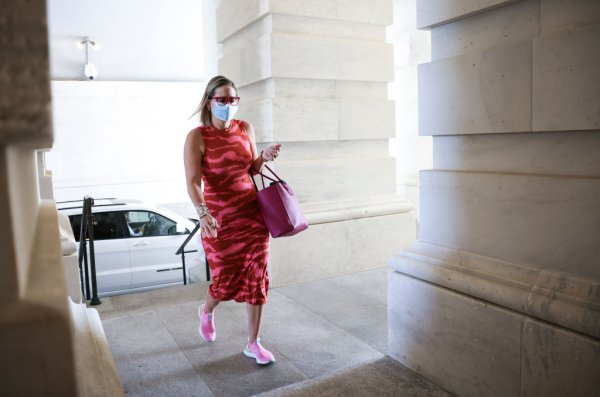 What Does Kyrsten Sinema Want?
Next Up: Editor's Pick