Afghanistan's Female Students Were Banned from Studying. Now Some Are Finding New Ways to Learn

There was an almost surreal quiet in the classroom at Kabul University on the morning of Sunday, Aug. 15. It was the start of the school week, and the financial-management professor had just begun answering questions posed by the students. Then, a young man burst through the doors, a look of frantic terror in his eyes.

“He told us that the Taliban have captured Kabul. He said, ‘they are coming here. Run!’” says Farah, one of the students, 24, recalling the moment. “I could not feel my hands and my feet, they were shaking,” she says. Farah, like every woman TIME spoke to for this story, asked to be identified by a pseudonym out of fear for their safety. “We just stood and started collecting all our notebooks,” she says.

That was the last time Farah saw her beloved university. In the two months since Afghanistan’s government collapsed, amid the chaotic U.S. withdrawal after 20 years of war, thousands of Afghan girls and women have been shut out of their high schools and universities, their studies over and their lives and futures in flux.

Before the Taliban seized the capital without a fight, about half the 20,000 or so students at Kabul University, the country’s oldest university, were female. Women’s education was perhaps the single strongest sign of change and hope for the new Afghanistan. Over two decades, the U.S. spent about $1 billion on education for Afghan women and girls—with some marked success.

Yet despite Taliban assurances during negotiations with the U.S. that all Afghans would have a right to education, the new government has barred women from stepping foot on university and high-school campuses—a situation that shows no signs of ending, despite pressure from Western governments. Taliban spokesman Zabihullah Mujahid recently said they would be allowed to resume their studies when there is “an environment where female students are protected.” That has strong echoes of the Taliban banning girls from education during their rule over Afghanistan between 1996 and 2001.

Roxana, 18, had just graduated high school when the Taliban took over this time around. On Aug.15, she was due to go collect her high-school transcript from a government office, which she needed to apply for scholarships to U.S. colleges. Then she saw people running in panic, screaming at her to go back indoors. Roxana says she is now struggling to reconcile her dreams with the new reality in Afghanistan. “Whatever I imagined when I was at school, it broke down in pieces,” she says.

Wearing hijab under their mortarboards and seated in separate rows from their male peers, the women pictured are members of Kabul University's class of 2010 and graduates of the department of language and literature. This graduation was held under tight security at a hotel in Kabul because of an upsurge in terrorist attacks.
Lynsey Addario—Getty Images

For these and other women, however, a lifeline has emerged: Online studies.

Banned from in-person classes in Kabul, hundreds of female students have rushed in recent weeks to register for a remote learning program launched by a California-based nonprofit online university, entering a new program that begins November 1, which is geared specifically at women banished from their education by the Taliban.

Amid the chaotic U.S. withdrawal in August, Shai Reshef, founder and president of University of the People, began thinking about the looming problems Afghan women faced. “We are afraid they will not be allowed to study,” he told me. University of the People offers U.S.-accredited degrees to around 100,000 students worldwide, including many in the U.S. itself.

As the U.S. prepared to withdraw, several efforts began to try place Afghan women in universities abroad: The United Nations Development Program offers several scholarships for them to study in nearby Central Asian countries, all funded by the European Union. And in August, Oxford University announced it would offer five scholarships to Afghan women, funded by a charity.

But University of the People appears to be the sole organization offering large numbers of full scholarships for Afghan women to earn degrees online, without leaving their homes. Although the students can take the courses for free, they are required to pay fees in order to sit exams and formally graduate. The fees are minuscule compared to average tuition at a U.S. university—about $4,800 for a four-year B.A. degree, and $3,000 for an MBA. Nonetheless, it is out of reach for the great majority of Afghan women.

So, a week after the Taliban takeover, Reshef advertised 1,000 scholarships to Afghan women, supported by the likes of the Bill and Melinda Gates Foundation, the Clinton Foundation, and the Ford Foundation. Around double that number of women applied, and Reshef has since raised funds to meet the demand. “With us, they can study at home,” he says, “and no one needs to know.”

TIME spoke to five women who had been accepted, all of whom are either in hiding or keeping their studies secret. Nasrin, 21, a Kabul University student, fled the campus as the Taliban entered the capital on Aug. 15, and spent four hours walking back to her house, amid the upheaval in the city. When she finally reached home, she discovered that some of the neighbors she had known all her life were celebrating the victory of the Taliban, whose members had once threatened to kill her father. Early next morning, she fled the city with her parents and five younger siblings, for a nearby village, where the family is now in hiding.

Nasrin says her new scholarship, which begins in November, has rescued her from sinking into dire despair. Despite the high Internet costs, and patchy connectivity, she says she is determined to throw herself into studying, partly as a key to emotional stability. “If they see women go outside without hijab, they [Taliban] hit them with sticks,” she says.

Ahead of her UoPeople course, Nasrin has also registered for online English classes offered by Kings College London, as well as a six-week psychology course entitled “What is a Mind?” offered by the University of Cape Town in South Africa. “I can understand why it would be a lifeline to her,” says Mark Solms, head of Cape Town university’s neuropsychology department, which runs the course, when TIME informed him that Nasrin was one of his students. “The course gravitates around the role of feelings in mental life,” he says. “I can see how in a personal way it would resonate in her current predicament.”

While some will need to keep their studies secret, for fear that the Taliban will try to shut down remote learning for women, there are also less political hurdles to overcome, like frequent electricity blackouts, and costly, slow Internet connections.

“For sure it will be difficult and hard for me,” says Farah, who fled her financial-management class the morning the Taliban seized Kabul; she now plans to get a business degree from University of the People. “The connection is so hard, and the cost is high,” she says, during a long conversation in which we recorded audio messages back and forth, rather than talking directly over an unstable Internet connection.

With her husband out of work, she says the couple will struggle to pay increase Internet charges; she says she intends to study at night, after putting her daughter to bed. “I have to go through with my dream,” she says. “I was planning for my future. I want to achieve that.” 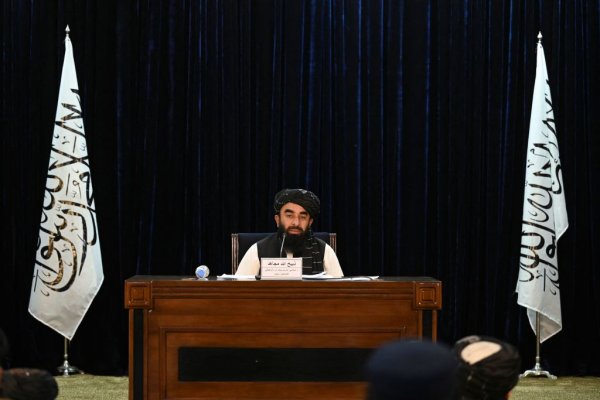 U.S. and Taliban Discuss Security Concerns in Doha
Next Up: Editor's Pick