The Trial Over Ahmaud Arbery's Killing Is Set to Begin. Here's What to Expect

The February 2020 killing of Ahmaud Arbery served as a flashpoint for the reckoning on racial injustice in America that dominated much of the public consciousness last year. Arbery, a 25-year-old Black man, was jogging in a suburban Georgia neighborhood when three men—father and son Gregory and Travis McMichael, and William Bryan—pursued, shot and killed him. The McMichaels and Bryan are white.

Cellphone footage of the fatal shooting allegedly recorded by William Bryan was released three months later to the public. The graphic video led to widespread outrage, and calls for an investigation into why the three men had not been previously arrested or charged. Now, more than a year later still—and more than 18 months since Arbery’s death—the trial of the McMichaels and Bryan is scheduled to begin on Nov. 5. They each face federal hate crime and state murder charges.

Jury selection began on Oct. 18 and ran for more than two weeks. The jury is comprised of 11 white people and 1 Black person.

After a jury was initially selected on Nov. 3 from a pool of around 50 qualified candidates, the prosecution challenged the defense attorneys’ striking of eight potential jurors, all of whom were Black. Each of the three defense teams representing the McMichaels and Bryan respectively was given eight strikes—across those 24 total, the defense eliminated 11 of the 12 potential Black jurors. All 12 of the strikes the prosecution was afford were used on white people.

Read more: Unreasonable Fear Is Killing Black Men in America—And There’s No Justification For It

Prosecutors argued that many of these strikes made by the defense were solely because of the would-be jurors’ race, per the Associated Press, an allegation that the defense attorneys denied. And trial judge Timothy Walmsley said that there appeared to be “intentional discrimination” in the jury selection process. Despite this, he ruled that the strikes could stand, and sat the jury on Nov. 3.

“It is a lived experience for Black people in America that we can never take for granted that a white person will be convicted for killing a Black person, no matter how much evidence we have,” civil rights attorney Ben Crump, who is representing the Arbery family, said during an Oct. 18 press conference.

After so many roadblocks, and with the trial finally moving forward, the Arbery family is hopeful that justice will be served. Here’s everything you need to know about the case.

What happened to Ahmaud Arbery?

On Feb. 23, Arbery was jogging near his Brunswick, Ga. home when he was shot during an altercation with Travis and Gregory McMichael.

Gregory McMichael later told authorities that he believed Arbery matched the description of a man who had been responsible for multiple break-ins that he believed had occurred in the area. It was later reported by The Brunswick News that only one break-in had been reported to the police since January; the owner of the vacant home in which Arbery had been seen on Feb. 23 later told police that nothing was taken.

The McMichaels armed themselves and followed Arbery in a pickup truck. William Bryan, who was initially believed to be a bystander, joined—and allegedly assisted—the McMichaels in their pursuit.

A painting of Ahmaud Arbery is displayed during a vigil at New Springfield Baptist Church on Feb. 23, 2021 in Waynesboro, Georgia.
Sean Rayford—Getty Images

The McMichaels told the authorities that, once they confronted him, Arbery attacked them. In the video footage, Arbery is seen running on the street when he comes upon two men believed to be the McMichaels in a pickup truck. One of them is standing next to the truck, while the other is standing on the truck’s bed. Arbery tries to run around them but a scuffle ensues with one of the men. Three shots are heard.

It was later revealed that Arbery was unarmed. An autopsy confirmed that he had no drugs or alcohol in his system.

Why did the McMichaels’ arrests take so long?

From the onset, the handling of the case was problematic. The Glynn County Police Department and the Brunswick District Attorney’s Office were responsible for the initial investigation. However, Brunswick district attorney Jackie Johnson later recused herself because Gregory McMichael, who was a former county police officer, was an investigator for her office. (In Sept. 2021, Johnson was indicted by a grand jury on charges of “obstruction” and “violation of oath by a public officer” for interfering with efforts to have the McMichaels arrested immediately after Arbery’s death.)

The case was then taken over by Waycross Judicial Circuit district attorney George Barnhill, who told the police that he did not believe there was enough evidence to charge the three men because of Georgia’s citizen arrest and self-defense laws. But in order to use those laws as justification, the McMichaels would have needed knowledge of a crime that Arbery was involved in. This was not the case.

Barnhill, whose conduct in the matter has been the source of some criticism, later had to step away from the case as well—because his son had previously worked with Gregory McMichael in the Brunswick prosecutor’s office.

In April 2020, the case was transferred to District Attorney Tom Durden, who is part of the Atlantic Judicial circuit. A month later—and amid the response to the footage of Arbery’s death—Durden asked if the case could be reassigned again. So Joyette Holmes, who was the district attorney in Cobb County, took over the case. And Holmes lost her DA position in Nov. 2020 elections to Flynn Brody Jr., who is now overseeing the case.

In addition, the McMichaels and Bryan were charged with federal hate crimes in April 2021.

What will the prosecution argue?

The prosecution will present a case that the McMichaels were not only the aggressors in the case, but that they were racially motivated. According to an investigator for the Georgia Bureau of Investigations, Travis McMichael used the n-word after shooting Arbery. During a bond hearing, the prosecution used social media posts and texts from the McMichaels to try and illustrate that they are racist.

And since prosecutors are arguing that it was the McMichaels were the ones who pursued Arbery, they would not be protected under Georgia’s self-defense law.

What will the defense argue?

All three defendants have pleaded not guilty to all their charges. The defense team for the McMichaels say that the men believed that Arbery was a burglary suspect and that the incident was not racially-motivated.

Kevin Gough, a lawyer for William Bryan, has previously argued that his client was nothing more than a witness—despite the evidence that Bryan’s car was used to help trap Arbery, who was on foot, during the three men’s pursuit of him—and will likely do so again. 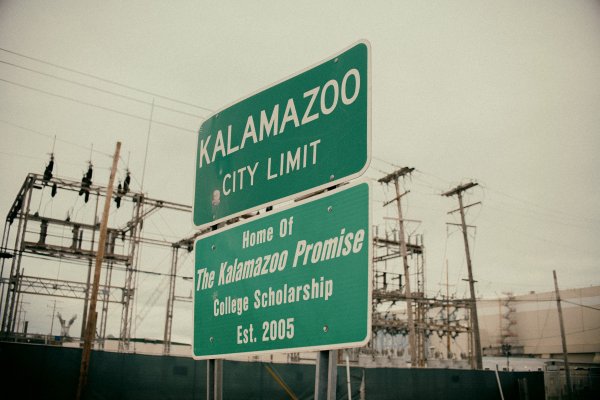 Rich Men Agreed to Fund a Failing City. Some Say They Made It Worse
Next Up: Editor's Pick